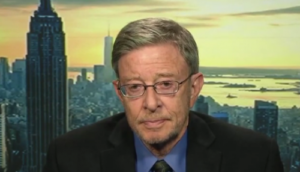 With eyebrows suspiciously furrowed, Tucker Carlson sat down tonight with NYU Professor of Russian Studies and contributor to The Nation, Stephen Cohen, to discuss the 35 page #FakeNews dossier which has gripped the nation with nightmares of golden showers and other perverted conduct which was supposed to be used by Russia to keep Trump on a leash.

The left leaning Cohen, who holds a Ph.D. in government and Russian studies from Columbia, taught at Princeton for 30 years before moving to NYU. He has spent a lifetime deeply immersed in US-Russian relations, having been both a long standing friend of Mikhail Gorbachev and an advisor to President George H.W. Bush. His wife is also the editor of uber liberal “The Nation,” so it’s safe to assume he’s not shilling for Trump – and Tucker was right to go in with eyebrows guarded. Cohen is a heavyweight in this arena, to say the least.

Cohen, who has been quite vocal against the Russophobic witch hunt gripping the nation, believes that this falsified 35 page report is part of an “endgame” to mortally wound Trump before he even sets foot in the White House, by grasping at straws to paint him as a puppet of the Kremlin. The purpose of these overt attempts to cripple Trump, which have relied on ham-handed intelligence reports that, according to Cohen “even the New York Times referred to as lacking any evidence whatsoever,” is to stop any kind of détente or cooperation with Russia.

Cohen believes that these dangerous accusations attempting to brand a US President as a puppet of a foreign government constitute a “grave American national security threat.”

At the very end of the interview, Tucker’s very un-furrowed eyebrows agreed.

Previous Dead Giveaway The 35 Page Dossier Was A Hoax? The British Don’t Use “Confidential,” They use “Official”
Next After Internal Investigation, Trump Says He Caught U.S. Intelligence Sources Leaking Info