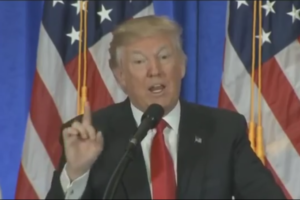 In Donald Trump’s first press conference since winning the election, the President-elect suggested that by process of elimination, elements within US intelligence – and not a mole amongst his team, had been identified as the source of leaks surrounding his CIA intelligence briefings – implying they may have also leaked the now infamous 35-page #FakeNews dossier on Russian influence.

If you recall, the Washington Post – which was privy to the CIA assessment on Russian hacking for their Trump hit piece on December 9th (10 days before the electoral college vote), also broke the story that the President-elect was skipping his intelligence briefings, according to “U.S. Officials”).

In an effort to try and find the source of the leaks, Trump conducted his own “sting” on intelligence officials by ruling out moles within his own staff – including his personal assistant Rhona Graff, by not telling anyone about an upcoming intelligence briefing. When reports of the meeting later emerged in the press, Trump concluded that the leaks couldn’t have come from anywhere other than the intelligence community:

…I think it’s pretty sad when intelligence reports get leaked out to the press. These are classified meetings and reports.

Trump then finished his point by referring to the 35-page hoax dossier leaked to Buzzfeed:

That report should have never been printed, because it’s not worth the paper it’s written on. Let me tell you, that should never, ever happen.

Prior to this exchange towards the end of the press conference, Trump made clear the “vital” importance of US intelligence – highlighting his recent picks for key positions within intel agencies (Mike Pompeo as director of the CIA and Dan Coats as director of National Intelligence), leaving many to surmise that the President-elect is referring to a specific opposition element within the intelligence community – perhaps tied to the outgoing administration and it’s vast spider web of power.

For those who caught what Dr. Steve Pieczenik said in November (Deputy Assistant Secretary of State under Kissinger and several others, expert in foreign policy, international crisis management and psychological warfare, terrorism expert, and guy who helped negotiate US-Soviet Arms deals under Reagan – AKA high level operator and the inspiration for Jack Ryan), perhaps we are witnessing the last act in the Assange-assisted counter-coup in the form of a desperate and reaching 35 page Hail Mary, which included lascivious and obscene tales woven by what may turn out to be the biggest troll the world has ever known.