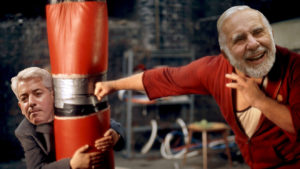 Don’t we have the best titans of industry, folks?

In an unsurprising move, Donald Trump has tapped campaign consultant Carl Ichan as a “Special Advisor” on Federal regulations. The 80 year old activist investor who has advised Trump on picks for the Treasury, Commerce Department, EPA, and the SEC, is now going to be in a position to find ways to stimulate economic growth by rolling back investment-repelling “overregulation.”  As the WSJ reports:

Needless to say, if you fuck with Carl, he’s gonna come after you with both guns blazing. I don’t want to hear about Ichan’s conflicts of interest – the guy is worth $15 Billion dollars, so of course he has investments all over the place. Should the country be run by poor academics with no real world experience? They all seem to be wealthy by the time they leave office, yet jobs continue to flee the country as US manufacturers throw in the towel. Let’s assume, until proven otherwise, that Trump, Carl, and the rest of the crew are going to act in the best interests of America.

Despite leaving several messages, Bill Ackman unable to be reached for comment.