President-elect Trump issued statements regarding today’s series of terrorist attacks; the first being the assassination of the Russian diplomat to Turkey, the second in Berlin, when a Pakistani refugee killed 12 people and injured 48 after driving into a crowd of holiday shoppers, and the third took place in Zurich after a shooting in a mosque.

Today there were terror attacks in Turkey, Switzerland and Germany – and it is only getting worse. The civilized world must change thinking!

Trump’s official tweet was followed official statements regarding the Turkey and Berlin attacks: 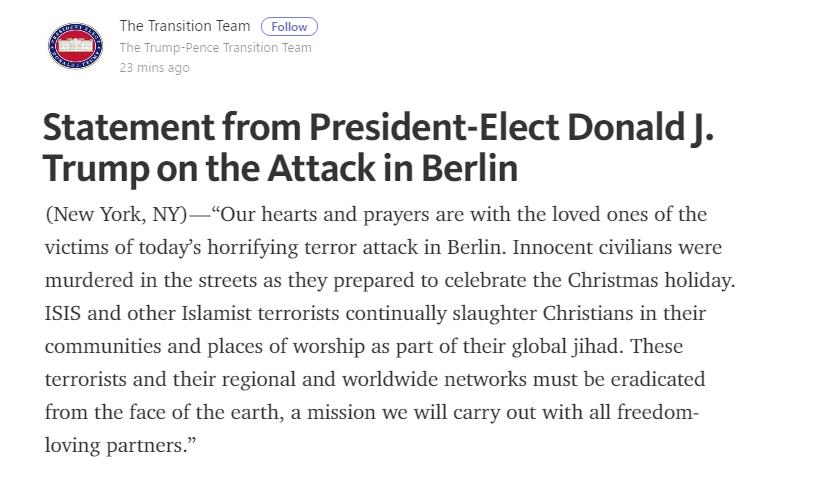 Let that sink in:

Bold and refreshing language from the man who will be president of the United States in a month. Trump also acknowledges Christians shopping for Christmas without censoring his language to be “inclusive” or politically correct. Sure is nice to have a president with a pair of balls. Mad Dog Mattis is gonna be one busy bringer of death if this is Trump’s opening salvo in his war on terror.

Reactions from around the web:

Note that there are more than a few people wondering why the Turkey shooting was so “clean.”

Not to be jackass, but why is there no blood #Turkey pic.twitter.com/QYNbfAzXga

Berlin attacker was a refugee. This one is on you Merkel. https://t.co/x3qE2I7hDU

My thoughts & condolences are w/ the people of #Germany following tonight's terrible tragedy in #Berlin, leaving so many dead & injured.

31 days until the alphas take over. No more free reign for ISIS. Time to get tough. #DefendTheWest #Berlin #Christmas #Zurich #Turkey pic.twitter.com/koa87XJ5ZJ