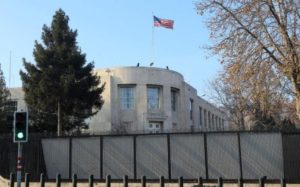 Hours after the assassination of Russia’s ambassador in the Turkish capital of Ankara, a gunman approached the US Embassy directly across the street, pulled a pump-action shotgun out of his coat, and fired into the air approximately 8 times. The man was subdued by security guards and taken into custody.

I’m surprised he’s still drawing breath as the embassy is undoubtedly on red alert right now and not fucking around.

No one was hurt in the incident which occurred hours after a Turkish policeman, appearing to condemn Russia’s military role in Syria, fatally shot Russian Ambassador Andrei Karlov in front of a shocked gathering at a photo exhibit.The embassy said its missions in Ankara, Istanbul and the southern city of Adana would be “closed for normal operations on Tuesday.” –usnews

Reports of shooting near US Embassy Ankara, #Turkey– US citizens advised to avoid Embassy area until further notice.