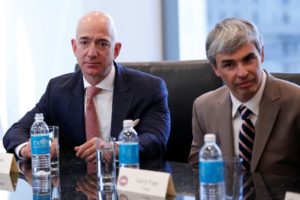 Did you know that the CIA invented the phrase “Conspiracy Theorists” in 1967 to attack anyone who challenged the official narrative? Does that sounds like the recently invented phrase “Fake News” to anyone? Indeed, the battle to influence hearts and minds through psychological warfare has been raging for years. Most recently, the once-credible Washington Post, rescued from the jaws of bankruptcy by worm lookin’ motherfucker Jeff Bezos, has become the de-facto propaganda arm of the DNC and the CIA. The paper which bashed Donald Trump all election after helping Hillary dismantle Bernie Sanders, cashed in on it’s remaining journalistic credits and jumped the shark as the exclusive source of unsubstantiated and hotly contested leaks from the CIA, following their shameful FAKE NEWS industry blacklist. First and foremost, leaking to WaPo before notifying congress of their Russian assessment should be a huge red flag for anyone with half a brain.

In response to losing all control over information, which redpilled the nation and led to Donald Trump’s victory, the establishment / MSM / social media has invented the manipulative phrase “FAKE NEWS” – which is an attempt to stigmatize sources of unauthorized thoughts before they reach impressionable “unaware and compliant” minds. The goal is exactly the same as it was in 1967 – to frame all forms of dissent as tin foil. Twitter and Facebook have started using liberal “fact checkers” to let people know what to think, and in the most recent attempt to sway public opinion, the Washington Post has teamed up with Google to create a new “fact checking” Chrome entension.

With the extension installed, Trump’s Twitter account now includes dozens of fact-check notes on any post with a statement that WaPo’s editors deem inaccurate or misleading. In these cases, the added gray box includes a simple headline, a few explanatory sentences, and a link to a longer WaPo article that offers fuller context. Samples of the extension at work have been posted in the above gallery.

The extension does not appear to offer context or statements in the case of a post being accurate, and Bump tells Ars Technica that the fact-checking has only gone back to late November. His announcement post about the extension claims that “our goal is to provide additional context where needed for Trump’s tweets moving forward (and a few golden oldies).” -ArsTechnica 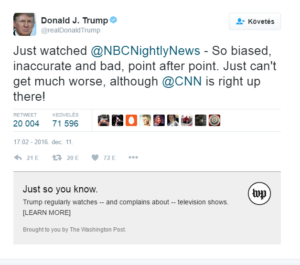 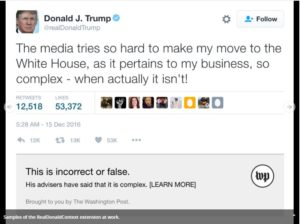 Funny, none of Trump’s true statements seem to be “fact checked.”  This anonymous account of the Washington Post’s agenda sums up the propaganda rag nicely:

Previous Obama; Russians Hacked Us, Told Them To “Cut It Out,” Obsessed Media Reporting Biased Voters, But Let’s Get Trump In The White House
Next Facebook Unleashes Liberally Biased Snopes and Politifact to Root Out Fake News