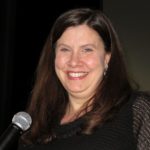 The New York Times is out today with an op-ed by Alexandra Zapruder (granddaughter of that Zapruder), who took it upon herself to vehemently argue that #Pizzagate is nothing more than a dangerous alt-right conspiracy theory promoted by “online terrorists.” This is the NYT’s second article defending Comet Ping Pong in three weeks. It’s also full of inaccuracies and completely fails to address the subject matter. Let’s quickly dissect: 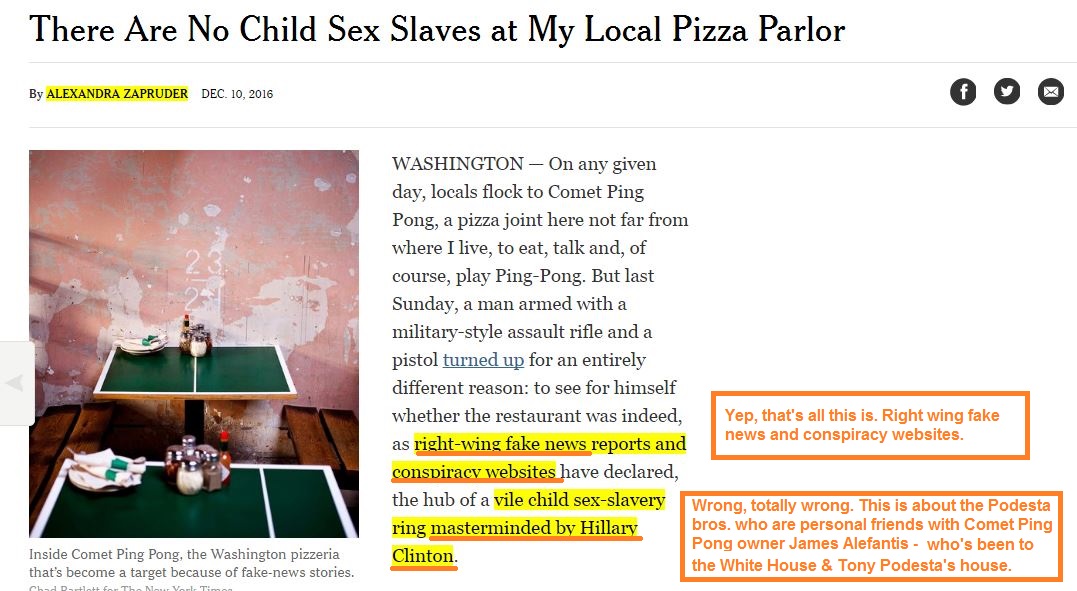 Right off the bat is the attempt to link “right-wing fake news” and “conspiracy websites” to the completely incorrect statement about Hillary Clinton’s role as “mastermind” of a child sex-slavery ring. Nobody has ever said this, and in fact Zapruder’s rhetoric is a psychological trick called “reductio ad absurdum” (reducing to absurdity) to convince the reader that the story is so insane it couldn’t possibly be true. You may have noticed other MSM outlets pushing the “Hillary Mastermind” theme in their reporting. Next:

Yes folks, if you question any of this you’re aligning with TERRORISTS!

Sure, association and innuendo and cherry-picked details. In case you didn’t catch that, the owner of Comet Ping Pong – James Alefantis (whose Instagram icon is Antinous, 13yr old lover of Emperor Hadrian, symbol of pederasty) has been to the White House and Tony Podesta’s house. A George Soros SuperPac even used Comet Ping Pong, of all the Pizza restaurants in DC, for $11,600 of catering. Clearly this isn’t just a case of a random pizza restaurant owner who somehow stumbled upon Washington Elite – as evidenced by Alefantis standing 20 feet away from President Obama as he took this picture (oh, and visitor logs). Alefantis is also tied to #spiritcook and Podesta Pal Marina Abramovic. Oh, and Alefantis – a pizza shop owner – was one of GQ’s 50 most powerful people in Washington. WTF? Maybe it’s because Alefantis was White House insider and Media Matters / Correct The Record founder David Brock’s LOVER.

The rest of the article is more of the same. You get the picture, and can read the whole thing here if so inclined.

Two thoughts immediately come to mind; first – Zapruder’s article goes over exactly zero of the evidence in question – of which there is plenty. The entire argument is an emotional tirade designed to shame any who dare question the strange and worrisome evidence. Second, why is the NY Times (among others) focusing so much energy on defending Comet Ping Pong? 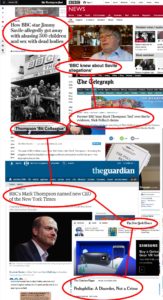 We DO know that NY Times CEO Mark Thompson covered up the UK’s Jimmy Savile case for The Guardian before joining the NY Times. In case you’re not up to speed on Savile, he was a high profile UK children’s television host and massive pedophile who was good friends with Prince Charles and disgraced pedophile bishop Peter Ball. Savile threw countless parties for high ranking members of the UK establishment steeped in rumors of pedophilia. Most of this was uncovered after Savile’s 2011 death, after years of Mark Thompson’s diligent work to protect this pedophile.

To review, we have a very suspicious body of evidence surrounding Comet Ping Pong, owned by David Brock’s former lover James Alefantis – whose Instagram icon is a famous pedophile. There is a mountain of evidence suggesting Alefantis is a pedophile himself, which include pictures, associations, and comments Alefantis has made online. This is all in the public record now. Instead of addressing the evidence and disproving it, the NY Times – headed by the guy who covered up the Jimmy Savile UK pedophile ring – has chosen to publish TWO articles in three weeks defending Comet Ping Pong – casting any suspicion as right-wing FAKE NEWS and conspiracy theory.

If there’s one way the MSM could possibly, single handedly, without doubt – add fuel to the fire that is #pizzagate – emotional opinion pieces like Zapruder’s are the blueprint. Attempts to frame curious people as terrorist sympathizers, instead of addressing the subject matter, are completely transparent and will blow up in their faces. This isn’t the JFK investigation. This is a massive crowdsourced effort to get to the bottom of what appears to be a high level Pedo ring operating in Washington DC, and it’s not going away anytime soon.

Previous The Same CIA Who Told Us Saddam Hussein Had Weapons of Mass Destruction Now Tell US Russia Hacked the Election
Next OPEC And Non-OPEC Producers Agree To Cuts: Oil Ripping +5%, Futures Surging