Day After Trump Excoriates Media For Being Cucks, The Don Cancels NYT Interview. Now Back On

While many expected the meeting to be an opportunity to ask questions of the president-elect, the media elites apparently got the surprise of their lives when Trump spent the majority of the meeting attacking they’re blatant biased coverage the 2016 presidential elections referring to the room as a bunch of “dishonest, deceitful liars.”  One participant in the meeting described it as a “f—ing firing squad” after “Trump started with Jeff Zucker and said “I hate your network, everyone at CNN is a liar and you should be ashamed….”  We suspect that was rather less cordial than they expected. (source)

Flash forward to this morning; Trump was set to do an interview with the NY Times, which he canceled because they changed the “terms and conditions.”

I cancelled today's meeting with the failing @nytimes when the terms and conditions of the meeting were changed at the last moment. Not nice

Perhaps a new meeting will be set up with the @nytimes. In the meantime they continue to cover me inaccurately and with a nasty tone!

Never passing up an opportunity to make the NYT eat shit, Trump points out that they’re more or less FAKE NEWS!

The failing @nytimes just announced that complaints about them are at a 15 year high. I can fully understand that – but why announce?

And here we have it:

The meeting with the @nytimes is back on at 12:30 today. Look forward to it!

I wonder what happened behind the scenes? Did Trump call their bluff after they tried to go heavy on him? Is a recently fired cuck at the NYT filling a banker’s box with the contents of their desk right now? Whatever the case, I have a feeling that President Trump is going to make the media his bitch.

Look, even CNN is coming around: 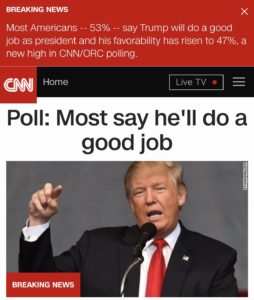