In what can only be described as the best recent example of famous liberals’ cognitive break with reality, maybe because Wanda Sykes said it was cool, these #WithHer ivory tower morons went and made a TOTALLY RACIST REMAKE of Beyonce’s revered Formation video and released it on the Jay-Z and Beyonce owned “Tidal” streaming media service. Truly mind boggling. 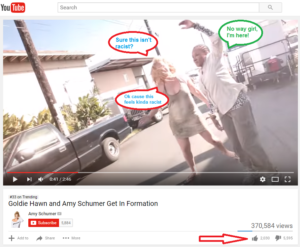 Not only has the video been downvoted 3:1 as of this writing, Amy Schumer’s twitter account has been bombarded with loyal fans who are outraged that these Canada bound Hillary supporting SJWs could be so ignorantly racist.

See the tweet and the video before they’re deleted:

Okay ladies watch us get in formation https://t.co/qu5GBjMozl

You be the judge:

Previous Michael Moore: Trump’s Election Will be the Biggest “Fuck You” Ever Recorded in Human History
Next BREAKING: Obama Knew About Hillary’s Server, “We Need to Clean This Up – They do Not Say state.gov”