This Market Is a Hot Mess

I’ve got two boys playing fall baseball (one is on two teams). I’m assistant coach for two of the three teams. That means practices 3 times a week and games on Saturday AND Sunday.

So the lack of my slicing, dicing, and modeling of the market is due entirely to this crazy schedule. I’ll get used to it soon and things will get back to normal.

But more important than my schedule: frankly speaking, the market has a high likelihood of continuing the crazy up-and-down action. There is not much more to say about it. Were I not so busy with baseball, I’m sure I could show you in many creative ways why it is likely to continue downward, but until I have some time to pamper my muse with good whiskey and a ten dollar cigar, you’ll have to deal with standard chart-chomping squiggly lines and stuff.

Look at this chart below, specifically the circled part. What a hot mess. 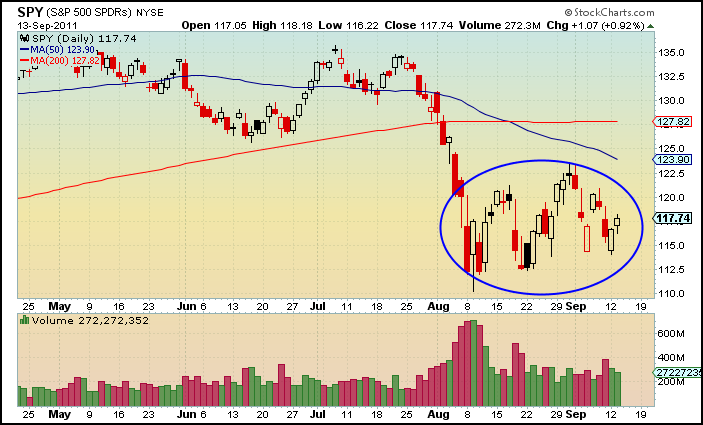 Look at all the gaps and the number of days with large ranges. The market is being yanked around like a rag doll.

At this rate, anything could happen. Part of me is starting to feel we are due for a big, big day. I’m not sure yet whether it will be up or down, but I believe it is coming.

I’m still bearish here, and I know I predicted a test of support near $112.50 in my last post, but Monday and Tuesday’s action has been rather bullish, or at the very least, it hasn’t been bearish. While I still believe that we are one bad news day from new lows, there does seem to be good support in this area.

Another rally to the SPY $120 area should not surprise anyone. Hell, given the volatility, nothing should be surprising. Should we rally to $120 and then fall (again), we will be set up for a nice head-and-shoulders pattern. With a pretty clean neckline around $112.50, a break of the neckline should bring all the bearshitters out of the woodswork [sic].

Early tomorrow morning I’ll be posting some short picks. Until then…

END_OF_DOCUMENT_TOKEN_TO_BE_REPLACED

The Bear Flag is Breaking Down

The latest in the series of posts applying simple technical analysis and some gut-level guesswork to the developing SPY bear flag. 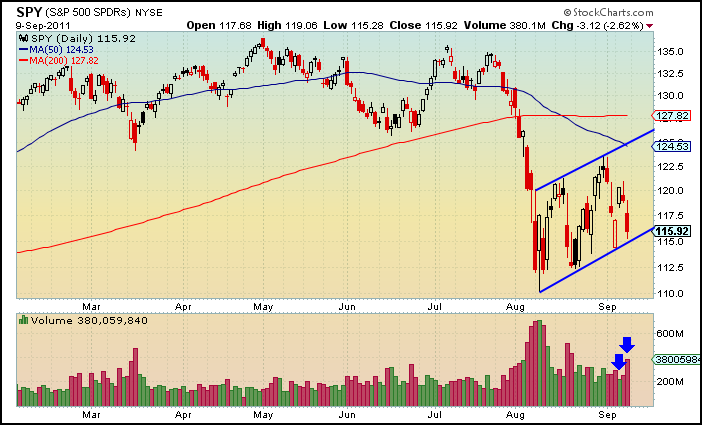 In my last post on the developing SPY bear flag, I wrote, “For now, this bounce could carry us to $120.00. That would be a conservative place to look to lighten up.”

I have consistently posited that this bear flag will break to the down side, and I see even more evidence of this happening, soon. I suggested $120.00 as a place to take profits or lighten because it marked approximately the halfway point of the flag, and because I believed the market would be unable to rally much higher.

While SPY certainly could bounce here and rally to the 50 day average, volume (look at the arrows) is coming in on the down side and lightening up on the bounces. It appears that there are still many sellers out there who want to lighten up, and buyers seem to be running out of steam.

I would not be at all surprised by another little bounce here, but I believe we will be re-visiting the August lows, sometimes this coming week.

The S&P 500 emini futures are down -0.75% as I write this. Should they stay depressed, we will be setup for an open beneath the lower line of the bear flag.

END_OF_DOCUMENT_TOKEN_TO_BE_REPLACED

Since the backtest results generated from buying new 200 day lows averages all returns together, I thought it might be instructive to observe a single, recent performance against the average of all previous returns. 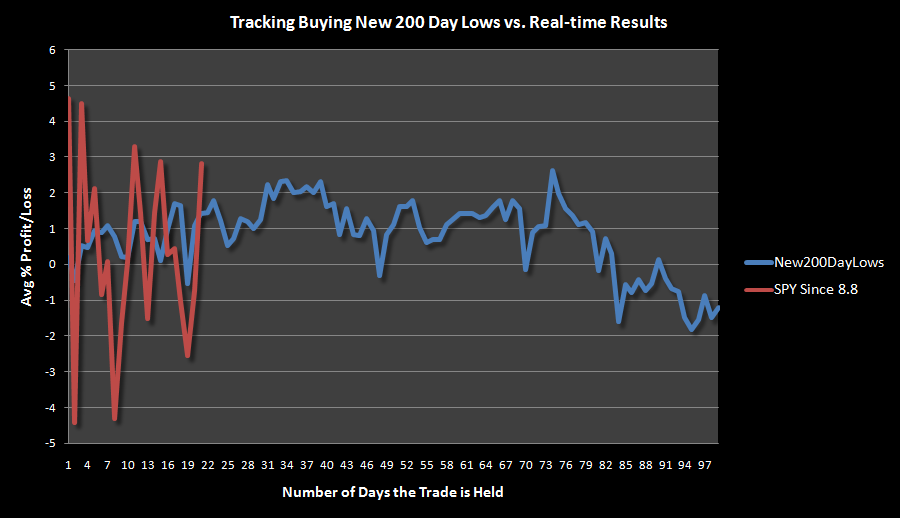 In the original post I wrote, “Based on these results, a new 200 day low seems to continue to produce a volatile, somewhat range-bound market, for many months following the occurrence.” One month later, that statement has proved to be accurate.

Since the blue line is an average of all trades, we would not expect it to be as volatile as a single trade. Still, the gyrations of the blue line are awfully similar to those of the real-time trade, represented by the red line.

What does this mean? Well, it means the market has traded exactly as history had us believe it would, and I see nothing to make me believe that anything will be different going forward.

For fun, let me make a prediction. See that little plateau that starts at day 31 and ends on day 40? I predict that we will soon see similar plateauing, and it will happen as SPY oscillates near the declining 50 day moving average.

END_OF_DOCUMENT_TOKEN_TO_BE_REPLACED

Over at ETF Prophet, Dave has published an interesting study which was in part spurred by my recent post, New 200 Day Lows Make for an Ugly, Volatile Future.

I found a recent post by Woodshedder on the behaviour of markets after 200 day highs and 200 day low absolutely fascinating. Well worth a read.

“The market making new 200 day highs is carried by its own momentum. The momentum allows the market to shrug off bad data and investor fear and uncertainty.”

It got me thinking…could this provide some sort of long term trend filter?

I applied this to different markets over various time frames as follows:

To see Dave’s results and read the rest of his post, go here: Days Since 200-day Highs.

END_OF_DOCUMENT_TOKEN_TO_BE_REPLACED

We Have a Technical Bounce. Now What?

Just as I suspected, the market found support at the lower line of the bear flag. Now what? 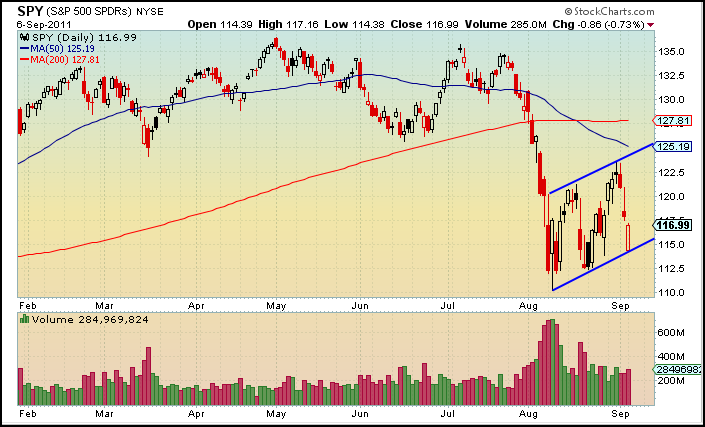 Yes, yesterday’s open was a tad scary. Hopefully you were not shaken out, selling at the low. I’ve been saying for over a month now that volatility would be the highlight of this market, and yesterday was no different. The market moves up and down, but when volatility is elevated, it REALLY moves up and down. While it did find support at the area where we suspected it would, it had also fallen 2 days in a row, and was simply due to bounce.

I do not think we’ve seen the bottom. I don’t know when we’ll break lower from this bear flag, but I do believe we’ll break down from it and not break out of it.

For now, this bounce could carry us to $120.00. That would be a conservative place to look to lighten up. Because the market is volatile, it could run all the way to $122.50, where it would find some resistance. I do not see it running to $125.00, where it would find the upper line of the bear flag, but it surely could.

The bottom line is that we’ll have to let it run for a day or two, and then look at the volume, and indicators, and make our best guess about where it will turn again.

I plan to run some studies tonight to see if we can glean anything from past market history. Until then, enjoy the bounce.

END_OF_DOCUMENT_TOKEN_TO_BE_REPLACED

As I type, S&P futures are down~2.6% from Friday’s close. Where does this take SPY in terms of the bear flag I wrote about on Friday?

Friday I wrote about the big bear flag that is developing on SPY.

If -2.6% is subtracted from the Friday SPY closing value of $117.85, the theoretical SPY open for Tuesday is $114.79. An open at this level puts SPY right at the lower line of the bear flag. Observe the green circle below for the target. 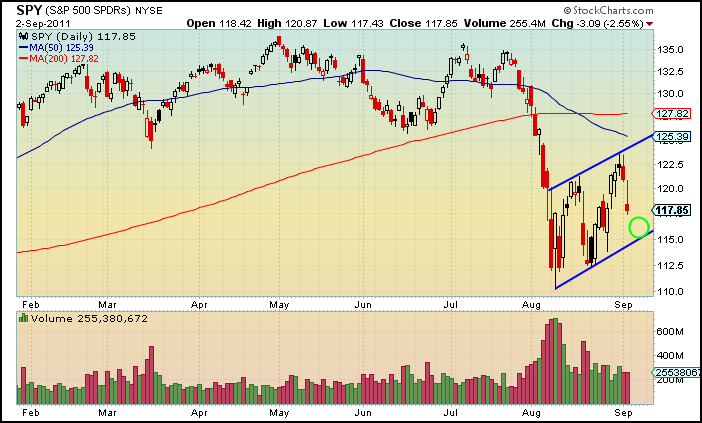 I’m looking for a bounce at the area of  ~$115, but should that not happen, I will be changing my position from “tradeable bounce” to “looking for new lows.”

I’m writing about the possibility of this event (breakdown of the bear flag) with a calm and reserved style. However, should this actually happen, I expect it to be violent and volatile. Up to now, whether or not we are in a new bear market has been a topic of semantic debate. If the market breaks down from the bear flag to make new lows, it will remove any doubt.

There is not much time to act. I always hesitate to give people the advice of reducing exposure in their 401Ks and 403Bs, but if the market breaks down to new lows, I expect we are in for another long and protracted bear market. The problem is that if you reduce exposure and we don’t break down, what do you do? Do you buy back in right away? Lucky for me, I don’t have to answer that question since I don’t manage your retirement account. Just be very cautious and aware of what staying fully invested here can mean. Choosing to stick it out at this point may mean losing 20 – 40% before another bottom is found.

END_OF_DOCUMENT_TOKEN_TO_BE_REPLACED

Just a quick observation before the holiday weekend…

It looks to me like SPY is forming a big bear flag. If so, we will watch closely to see how each side of the flag handles pressure. So far, the top of the flag is performing just as we would expect. Will SPY trade to the bottom of the flag, and will it bounce there? I suspect it will bounce, at least this time. 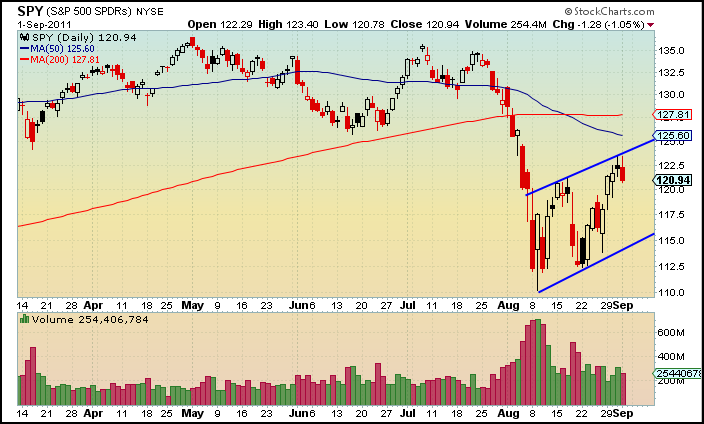