TNP has completed a 5 month consolidation and has broken out on very high volume.

While the RSI(2) is showing overbought, the Stochs and MACD have room to move up. Consider waiting for a pullback or a re-test of the pivot-point before taking a position.

END_OF_DOCUMENT_TOKEN_TO_BE_REPLACED

Some charts from Friday evening’s screens.

These stocks have undergone healthy consolidations and look poised to test 52 week highs. Look for a pullback before considering a long position.

END_OF_DOCUMENT_TOKEN_TO_BE_REPLACED

According to Bulkowski, the August breakdown is a Head & Shoulders complex bottom.

END_OF_DOCUMENT_TOKEN_TO_BE_REPLACED

Who would have thought that with housing in its worst shape in many decades, credit locked up tighter than its been in 20 years, job growth barely enough to sustain the economy, and a declining GDP, that the markets would pull off a successful V bottom?

With the DOW and the SPY closing above their major moving averages, and the Nasdaq set up to regain its 50 day average very soon, there is not much left for a bear to hang his (ass)hat on. Honestly, there are only two elements remaining about this rally that leave room for doubt.

The first is volume. Volume across the board has been declining as the market moves higher. It is important to note that volume in August was also slack but did not stop the market from continuing much higher. Generally, declining volume in a rising market is bearish.

The other technical element which casts a shadow of doubt on the rally continuing is that the indexes are becoming overbought. However, it is entirely conceivable that this condition gets worked off over the next few days, just in time for a huge Fed rally on December 12th.

While the bearishness has almost been beat out of me, I’m not yet ready to go long here. In four days, the Fed will report, and the market will once again be allowed to trade fairly unencumbered by Helicopter Ben and Dubya (This is NOT a Bailout), at least until the next crisis.

I still believe there is money to be made on the downside. As I have outlined, the indexes have reached their honey holes, and while it seems insane to short here, If you want to sell high, and buy low, now is the time.

END_OF_DOCUMENT_TOKEN_TO_BE_REPLACED

Bulls Grow A Pair, But Come Up Short 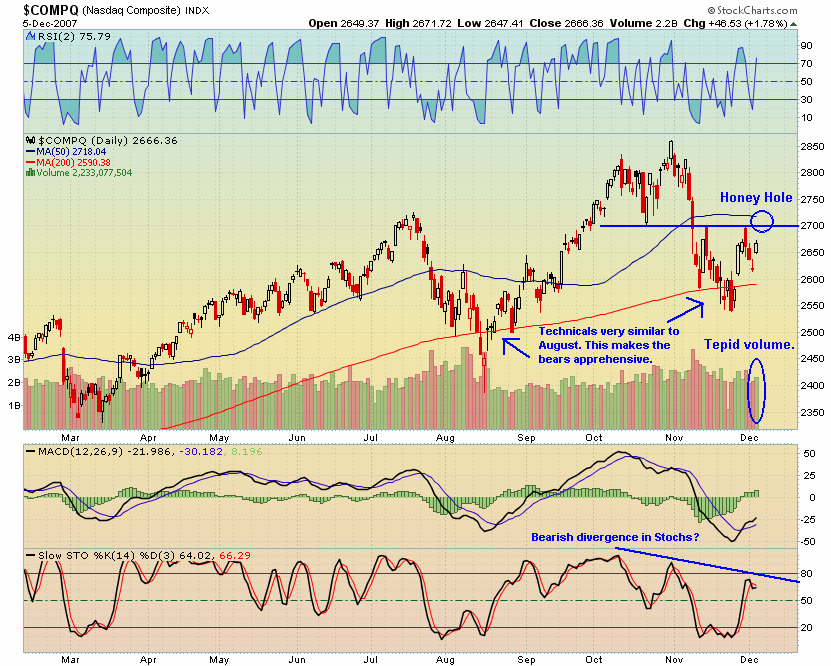 The Bulls obviously liked the ADP report today, and succeeded to push the indexes up enough to record a follow through day. William O’Neil and Investor’s Business Daily use the follow through day as an entry signal following a market correction. I was shocked that IBD modified their entry criteria (IBD Abandons Their System and Places Market in Confirmed Rally) when they recorded a follow-through day last week. Had they just waited patiently, they would have gotten their follow through day without modifying their methodology.

The rally today was impotent. More of the same: big moves accompanied with slack volume. The Nasdaq, otherwise known as the main bull cheerleader, still sits ~35 points below it first area of resistance.

The action reminds me of when I used to live in Georgia. I lived next door (well, several hundred acres away) from an Emu farm. I would help the farmer “harvest” the Emu. The Emu were kept within fenced enclosures 20 feet wide by 60 feet long. The owner would put on a cup, combat fatigues, and combat boots. His name was Jeff, and he was about 6 foot tall and 225 lbs. He would sneak up behind a huge bird and jump on its back, much like a cowboy from behind a horse. Wrapping his hands around its long neck, the bird’s legs would fold beneath it, and he would force it too the ground. Once on the ground, he kept one hand on the base of its neck and used his other hand to stretch the bird’s neck out on the ground.

Now, I’m sure you’re wondering just how we did the bird in. You’re probably thinking that us dumb Southerners would use a dull machete to lop off the bird’s head. Or even an axe. Even considering such a method shows how little you know about Emu.

By far, the preferred method of slaughtering the bird was with a .45, point blank. Once the bird was settled down with its neck stretched out, I would put the barrel of the pistol between its eyes and pull the trigger.

Now, let me bring this back to the market action.

Once I pulled the trigger, Jeff and I would simultaneously jump up and run as fast as we could to the gate of the pen. You see, chickens really do run with their heads cut off. And chickens that weigh 100 lbs, run 30 miles per hour, have 3 big talons, and jump 6 feet high, are fairly dangerous when their heads are blown clean off. Seriously, those birds would absolutely destroy their pens, ripping apart commercial grade fencing, all with no heads. Simply put, life is often not extinguished like a flame between moist fingers. Often, death is not a peaceful giving-in but rather a violent struggle against an indomitable foe.

Such is the market.

Until resistance is broken, you’re all still running around with your heads blown off.

END_OF_DOCUMENT_TOKEN_TO_BE_REPLACED

I have been screening nightly for a good RSI(2) setup. I have yet to find anything outstanding. However, ECA, while it is less than perfect, certainly makes an interesting chart for analysis.

The stock made a well-formed cup, and then made its first handle in September and October.Â ECA then broke above its pivot, formed another short handle, and then screamed upwards.

However, we are less concerned with the breakout, and more concerned with how oversold ECA is. The RSI(2) is 1. Also observe the Stochastics. Looking at today’s candle, we can see that ECA tried to work off its oversold condition but met with previousÂ resistance and the 50 day moving average. Normally a failure at the 50 day would open up the possibility for short selling. In this instance, it is hard to imagine this will continue downward without some sort of bounce or consolidation to work off the oversold status.

While this is not a perfect setup for the RSI(2), it does give one the idea of what to look for. We want a stock that has made a significant move up, and has then pulled back to either a trendline or moving average support, with RSI(2) < 2.

You can read the post that explains more about the RSI(2) here: Improving Your Timing with the RSI(2).

END_OF_DOCUMENT_TOKEN_TO_BE_REPLACED

The COMP, SPY, and DJI all found support right above the previous downtrend line in early morning trading.

This is a bullish development and halts bull hamburger production for the time being.

A sustained bounce from this level will make a V bottom, which will be very similar to the technicals witnessed in August.