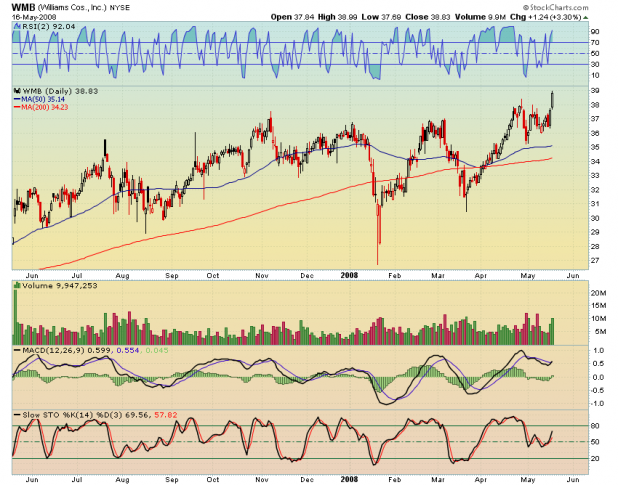 [[WMB]] The Williams Companies, Inc., through its subsidiaries, engages in the production, gathering, processing, and transportation of natural gas in the United States. 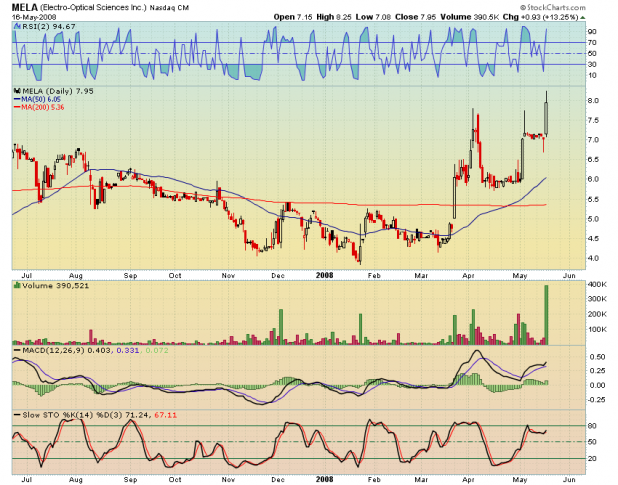 [[MELA]] Electro-Optical Sciences, Inc., a medical device company, engages in the design and development of a non invasive, hand-held imaging, and point-of-care instrument to assist in the early detection of melanoma in the United States and internationally.

If any of you fundamental analysts do not mind taking a look at the numbers for this company, I’d appreciate the low down. This one is interesting to me because of the chart and the product. 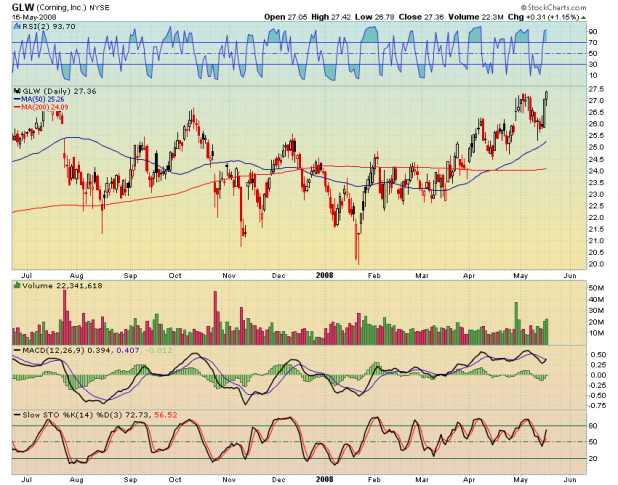 [[HERO]] Hercules Offshore, Inc. provides shallow-water drilling and marine services to the oil and natural gas exploration and production industry in the U.S. Gulf of Mexico and internationally

As unbelievable as it seems, the [[SPY]] and Nasdaq are back aboveÂ their 200 day moving averages. The SPY is about 4 points away from going positive year-to-date. By any measure I am aware of, we are no longer in a bear market. Although the Dow Jones is still just beneath its 200 day average, is their any doubt that it will not soon overtake it?Â

Since the bottom in March, the indexes have gone straight up, with a few pullbacks along the way. This kind of up trend is confirmed by the VIX, which is near its October lows. “Why be fearful?Â Just get drunk and buy stocks!” says the VIX.

The Nasdaq has put in a beautiful saucer-shaped bottom. Except for the index going straight up, for 2 months in a row, I can’t find much to be bearish about, technically. The RSI(2) is at levels that typically coincide with pullbacks, but as of yet, there is no indication that the market wants to do anything but keep going straight up.

Yet, there is still something that doesn’t feel right about the whole ordeal.

I mentioned a month or so ago that I would not be surprised to see the indexes get close to positive, suck everyone back in, and then reverse. The Nasdaq has ran up 15% since its bottom in March. MACD is not confirming the move, and we are entering a period of seasonal weakness. Today’s close on the Nasdaq and SPY putÂ both indexes above the upper Bollinger Band. For these reasons, I’m expecting another quick pullback, in the short term. Longer term, my guess is that the indexes will not get very far into positive territory for the year before experiencing a significant pullback of 5-10%.

END_OF_DOCUMENT_TOKEN_TO_BE_REPLACED

I was able to get my trader (wife) to close out my [[DDM]] trade about 20 minutes from the close today. It was profitable, +1.25% Upon examining the trade this evening, I realized I have closed the trade early. Let me explain.

I was able to check Stockcharts several times today, and at one point, RSI(2) on DDM was 79.90. I figured that was close enough for meÂ to close the trade. I checked yahoo later in the afternoon, and the indexes looked to be reversing. I went ahead and closed the trade, instead of waiting for tomorrow a.m.

This exercise raises an important question: What will the results be when I can have this strategy triggerÂ when usingÂ hourly bar readings of the RSI(2)? That was rhetorical. I’m just really curious to find out.

An obvious benefit of using the RSI(2) trigger on a closing basis is that it guarantees the etf is truly oversold or overbought before triggering an entry/exit. Using the appropriate criteria, the trader can get in and out near the bottom and top of the swing.

END_OF_DOCUMENT_TOKEN_TO_BE_REPLACED

Today, the QID RSI(2) was below 5. After the afternoon reversal in the Qs, the RSI(2) closed well above 10, likely near 30. However, the strategy still triggers a buy on the open of the [[QID]].

I was also watching the double short S&P [[SDS]] and I swear the RSI(2) was reading around 8, late morning. Thus, it too has signaled a buy on the open. Strangely enough, Stockcharts now does not show that the RSI(2) dipped below 10. For this reason I’m not comfortable saying that the trade has triggered.

Full Disclosure: I bought 100 QID and 100 SDS just before the close.

END_OF_DOCUMENT_TOKEN_TO_BE_REPLACED

The Fly is All The Buzz in Blogosphere

With oil and gas prices at current levels, the favourite blog of Report on Business readers says you’d have to be @#$%-ing nuts not to own energy stocks.

That’s iBankCoin for you. Profane, impudent and No. 1-ranked in the popularity contest that ran for the past week on ReportonBusiness.com. Last Tuesday, five ROB columnists and Howard Lindzon, a portfolio manager and founder of the Wallstrip.com website, each presented their five favourite blogs. Readers were then given the chance to vote online for their top choices among these blogs.

A total of 5,112 votes were cast and iBankCoin, formerly known as Fly on WallStreet, was the clear winner. The star here is George (The Fly) Hamilton, a professional money manager who provides a hilarious running commentary to his trading day. The overall tone: Irreverent, but on the money through the constant flow of stock picks and opinionated commentary.

Check out a posting made at the end of last week on the price of natural gas, or â€œnatty,â€ as The Fly calls it. Almost none of it can be quoted here for profanity reasons, but the gist is that the rise of commodity prices is inexorable and too powerful to bet against. The Fly also provided the natural gas stocks he’s holding, and the ones he’s watching. This blog names names.

Blogs, a shortening of the term Web log, first appeared about a decade ago and initially were a way for individuals to communicate with like-minded people on topics of interest. At least one of the blogs on our favourites list, Canadian Capitalist, still works along these lines. But some others suggest that blogs, financial ones at least, are starting to develop a more business-like profile.

IBankcoin was formed last November when The Fly brought some other bloggers into his fold to create an organization with 10 writers and 300 contributors to a forum he calls The Peanut Gallery. Another example of a blog that’s more of a business than a personal soapbox is DealBreaker, which readers ranked third. DealBreaker is part of a New York blog mini-conglomerate, Dead Horse Media, that also runs Fashionista.com (on fashion) and AboveTheLaw.com (for lawyers).

â€œWe take the irreverent, unorthodox angle to today’s business news stories,â€ said David Minkin, publisher of DealBreaker. â€œWe want to cover the angles that aren’t getting enough coverage. There are lots of idiosyncratic things that go on within the Wall Street culture.â€

The overwhelming popularity of DealBreaker, iBankCoin and readers’ second-ranked choice, Wall Street Fighter, attest to the appeal of the sharp-tongued approach to blogging. Wall Street Fighter collects wacky factoids from the financial world and serves them up with lots of nasty comments.

The anonymous person behind this site had a good old time the other day with what were described as the seven worst money-saving tips to be found on the Internet. Tip One: Stop buying alcohol. Wall Street Fighter’s annotation: â€œWell, how do they suggest we get it then? Steal it from somewhere?â€ Tip Two: Attend free local events you find in your local newspaper. Wall Street Fighter: â€œFirst off, a newspaper? What are we, stockbrokers from the 1930s? Get digital, baby.â€

And now to a couple of more, um, thoughtful blogs. Fourth-ranked by readers was Infectious Greed, by Paul Kedrosky, a venture capitalist and former equity analyst. Mr. Kedrosky’s background analyzing tech stocks can be seen in his smart commentary on companies in the sector, and he’s got some mildly contrarian things to say about soaring oil prices.

The fifth-ranked blog, Canadian Capitalist, represents the triumph of the informed amateur. Ram Balakrishnan, an Ottawa software developer, began his blog back in 2004 as a way of furthering his interest in managing his portfolio. â€œI just started yakking on financial topics,â€ he said. â€œI was surprised to see that I got some readers out of it, so I just kept going.â€

Mr. Balakrishnan’s blog comments are clear, concise and right in tune with what’s going on in your life. Recent postings have covered the housing market, stock market volatility and group registered education savings plans. Like any good blog, he keeps the comments coming regularly. â€œI post almost every workday because people don’t tend to read much on weekends. I’m guessing they’re reading blogs at work.â€

Here is the link: The Fly is all the buzz in the blogosphere

I’ll take the bold step of speaking for The Fly here by offering the sincere thanks of all iBC bloggers to Howard LindzonÂ for nominating The Fly, and by default, the godly site of iBankCoin.

However, it seems Howard has realized his folly, and has offered an apology to the Globe and Mail for this most egregious nomination.

In the spirit of The Fly, fuck you, Howard.