A Quick Look at the Breakout and Re-test

During times when volume is slack and there is not much going on, I like to scan for stocks that have recently broken out or broken down, and have re-tested their breakout/breakdown pivot points.Â These types of setups allow entries into stocks that have already begun making a strong move, but are taking a breather.Â It is not an anticipatory setup. The breakout or breakdown has already occurred, and the nimble trader is afforded a lower-risk entry just before the stock begins to move again. 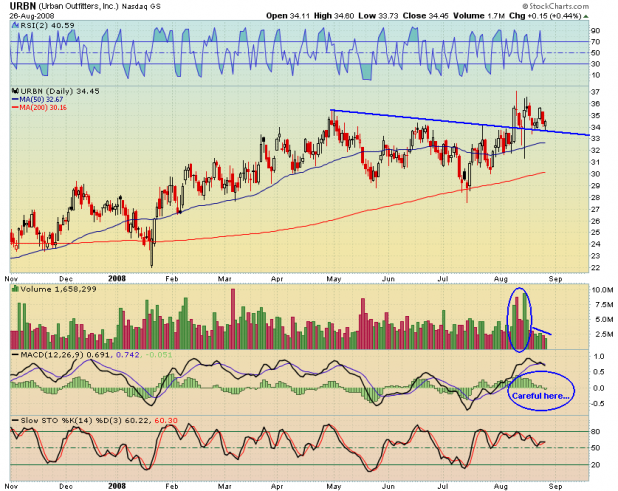 Urban Outfitters, Inc. [[URBN]] is a good example of the breakout and re-test. The volume on the breakout was good, while volume on the re-test has been slack. That is exactly what one wants.Â Watch the MACD here. It should stall out and begin moving back over the signal line if this trade is going to work. 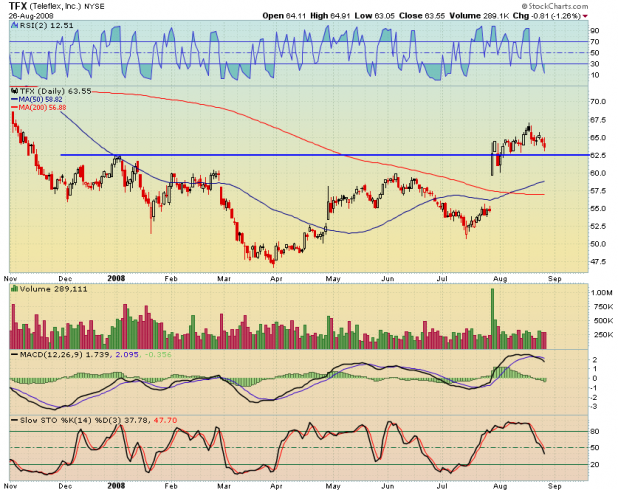 Arena Resources, Inc. [[ARD]] is a good example of this setup for a breakdown, short play.Â This one has the added benefit of 50 day average resistance. Even with Gustav coming ARD does not look very sure about shaking off its breakdown and beginning a new uptrend.

END_OF_DOCUMENT_TOKEN_TO_BE_REPLACED

Anyone Feel Like They Are Flipping A Coin, When Trading This Market?

I want to introduce to all of you a statistical measure which has come to have a significant influence on the trading systems I am developing. Ralph Vince describes the measure very well in his book Portfolio Management Formulas.Â This measure is called the Z-Score, or the Runs Test.

I want to skip most of the statistical jargon and get right to the meat of the issue, but I will be happy to answer specifics in the comment section.

To understand why the Z Score or Runs Test isÂ important, we need to digest Rob Hanna’s statement from his recent post How to Trade the Choppiest Environment in 50 Years. Rob writes, “As you can see, buying after strong days and selling after weak ones worked well for 40 years. In 2000 that changed, and the last year and a half is the worst it has ever been with regards to follow through. This would suggest that strategies that may have worked well for forty years or more could be suffering greatly now.”

Both authorsÂ conclude that short-term trend following is not working very well.Â We can test their conclusion by applying the Z-Score to theÂ dataÂ from theÂ indices.Â IÂ should mention that both Bhh fromÂ IBDIndex and Damian from Skill Analytics have been instrumental in helping meÂ flesh out the rest of the ideas presented below.

While Z-Score has traditionally been used to analyze the win and loss streaks of aÂ trading systems, it seems that another application for the measure may be to analyze the win and loss streaks of theÂ indices in order to determine whether there is any dependency. Are the sequences of wins and losses containing more or less streaks (of wins and losses) than would be expected in a truly random sequence? When digesting this, consider the fair coin, where one flip is equally as likely to be heads as it is tails. We want to determine if the indexes are trading as a fair coin, or one that is biased to heads or tails, or both.

Note that the positive dependency is decreasing, yet from 1970-Present, the confidence level is still above 99.73%.

Note that there has been a switch. The positive Z-Score implies a negative dependency, where buying begats selling, and selling begats buying. Be careful though with this data, as the score must be above 1.64 to have a confidence level of greater than 90%.

Note that from 2000 on, the Z-Scores move lower. The highest score from this period, 1.303, gives a little better than an 80% confidence level. I interpret this data to mean that the S&P 500 is basically moving through a random walk, although the confidence level is not high enough to draw any firm conclusions.

From January 2008 to the present, we begin to once again see negative Z-Scores. A negative score implies a positive dependency, where selling begats selling and buying begats buying.Â The scores are notÂ significant enoughÂ to exhibit a high level of confidence.

Right now, betting on the market, as represented through the SPY, is similar to betting on the flip of a fair coin. This data, while it may not prove the conclusion of Hanna and Steenbarger, certainly does not disprove it.

It seems to me that keepingÂ shorter and intermediate time frame of Z-Scores, update daily across the indices, could give the trader a head’s up that market conditions may be changing to be more favorable to trend-following or contrarian strategies.

END_OF_DOCUMENT_TOKEN_TO_BE_REPLACED

Something Is Happening, But I Don’t Care What It Is

My signals say this weakness should be bought, but again, I’m only looking for short-term swings lasting around 5 days. And, I use stops, religiously.

I’m going to give you all another list of stocks which meet the criteria for a good short-term swing.

If you want to know what is happening, or if you are having a hard time in this market, check out this excellent article: How to Trade the Choppiest Environment in 50 Years.

After reading the linked material, consider it your homework to review the setups listed above, keeping in mind the overall point of the article.

END_OF_DOCUMENT_TOKEN_TO_BE_REPLACED

As noted in the previous post, the 20 day moving average is crossing over the 50 day average from beneath, on the NDX.Â This type of action can signal that an intermediate uptrend is underway.

I decided to test thisÂ cross to see what edge might exist, if any.

2. Sell when price closes below the 50 day moving average. 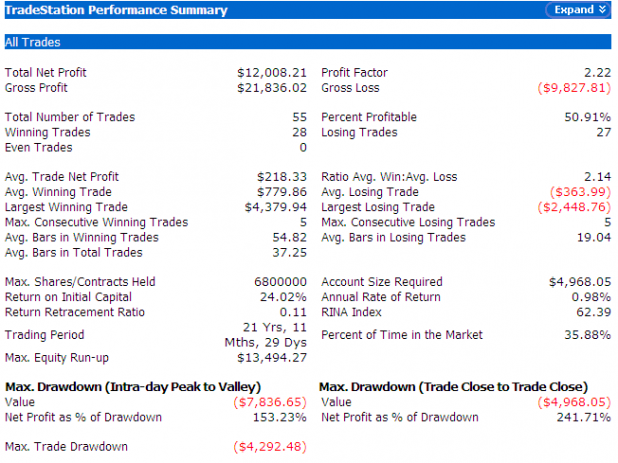 The percent profitable shows that this strategy is about equal to a coin flip, in terms of winning percentage. However, the average winner is twice the size of the average loser, so there is an edge there. 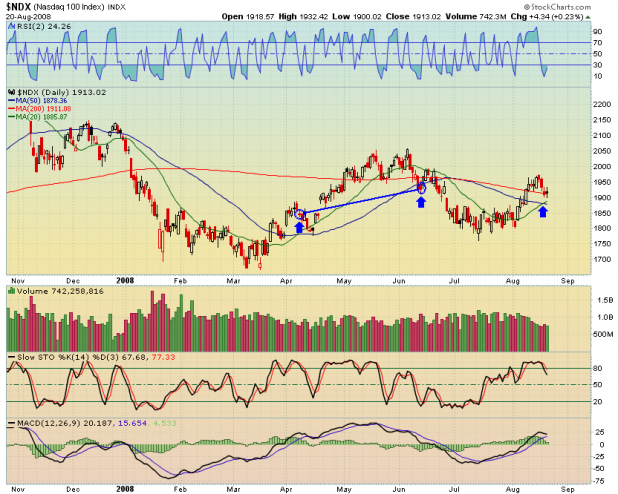 I added this chart for Gio. You can see that this trade set up in April and lasted through June (closing when price closed beneath the 50 day average), and was profitable. The last blue arrow shows the latest cross.

END_OF_DOCUMENT_TOKEN_TO_BE_REPLACED

Looking For a Bounce

The markets move both ways. I view extended moves that happen in one direction, a la June and early July, as anomalies. What makes that type of moveÂ odd is that there were really no herky-jerky type spikes and pullbacks–just a straight move down.

What I’m looking for the rest of this week is a spike, of the herky-jerky type, if you will. 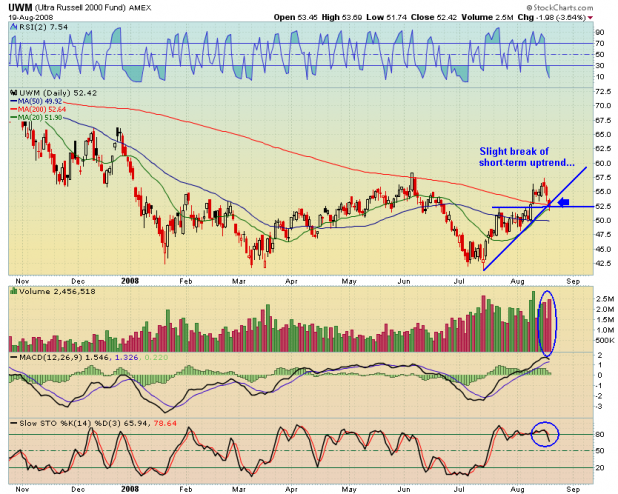 The Russell 2K, represented here with the [[UWM]] is short-term oversold and is sitting right at 3 levels of support: 20 &Â 200 Day Moving Averages, the Uptrend Line, and Support above July and August resistance. The 50 day moving average is sitting a couple of points beneath Tuesday’s close. Due to these factors, I’m looking for a bounce. 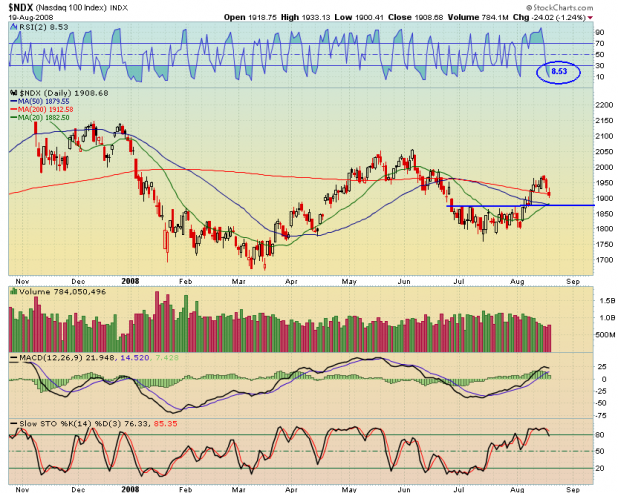 All eyes have been on the Nasdaq 100, over the past month or so. Similar to UWM, the NDX is sitting near multiple levels of support. It is short-term oversold.

Note the 20 day average is crossing above the 50 day average. More on that in a later post.

For this type of set-up, where I’m looking for a short-term bounce from oversold conditions, I want to buy strong stocks that have pulled back, holding them for a week or less, and cutting them loose quickly if they move against me. The following list encompasses the type of stocks I like for this setup.

END_OF_DOCUMENT_TOKEN_TO_BE_REPLACED

Looking for a Pullback 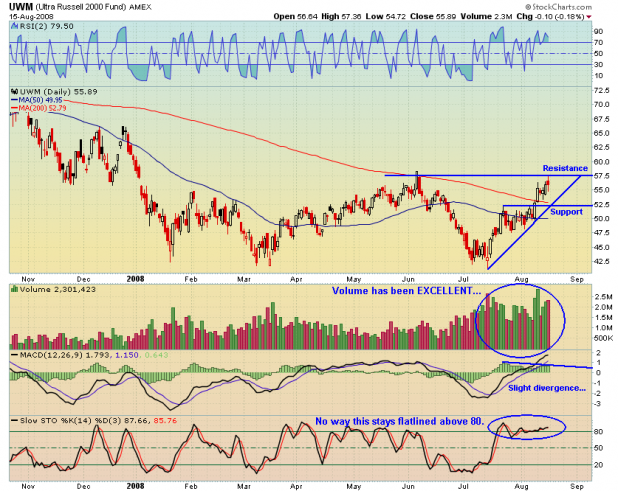 The Russell 2000 has been ripping higher, but has now reached a rather obvious point of resistance at the June high. The current trajectory is unsustainable and will be checked again soon. I’m looking for a pullback to at least $52.50

Some things to note about the [[UWM]] : Volume on the move off the bottom has been absolutely awesome. There has been some serious accumulation going on.

MACD is still strong, but is showing a slight divergence. I expect it to start rolling over. Along the same lines, the Stochastics are due to spend some time beneath 80.

What I am watching for is a break of the uptrend line, which started from the July low. A break of the line will mean the trajectory is slowing.

I ran a test tonight on the IUX, going back to 1994. A buy signal was generated when the Russell closed above the 200 day, and a sell was generated when it closed beneath the 200 day average. The average losing trade lasted 7.65 days. As this system would have had you in the Russell for 5 days now, if the index does not reverse back beneath the average, sometime this week, it is likely that it will remain above it for the next 4 months, on average. 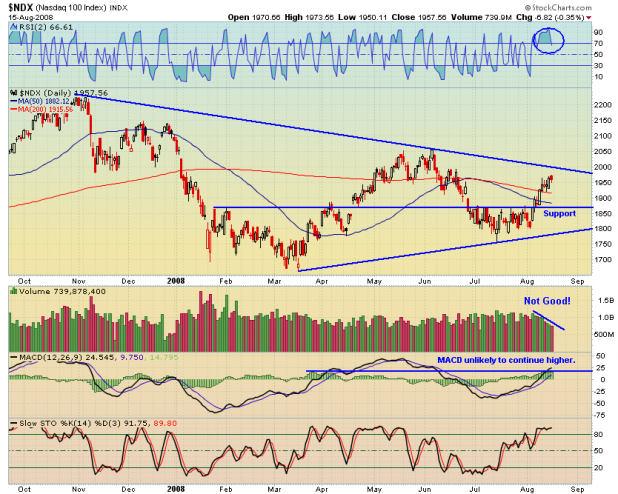 Up next is the NDX, which is the Nadaq 100 index. This one has also been strong, although it is showing signs that momentum may soon slow.

The NDX is approaching primary resistance, extending from the October 2007 high. As a contrast to UWM, volume has been slowing on the move up, which is never good.

The MACD is at a level where a reversal typically occurs, and RSI(2) has carved out an extended, albeit short-term, top.

I ran another test tonight, on the NDX, going back to 1985. The buy signal was a close above the 200 day moving average and the sell signal was a close below the average. The average losing trade lasted 10 days, while the average winner lasted 147 days. As the NDX has closed above the 200 day average for 5 days, we should watch closely to see what happens over the next week. Should the index remain above the average, I will consider the possibility of a multi-month bottom being in place.

I am still leaning long, and will continue to buy both breakouts and weakness in strong stocks. However, I will enter some double inverses tomorrow to play the downside that I am expecting.

END_OF_DOCUMENT_TOKEN_TO_BE_REPLACED

After two days of no breakouts to speak of, today’s strength resulted in four beautiful breakouts. 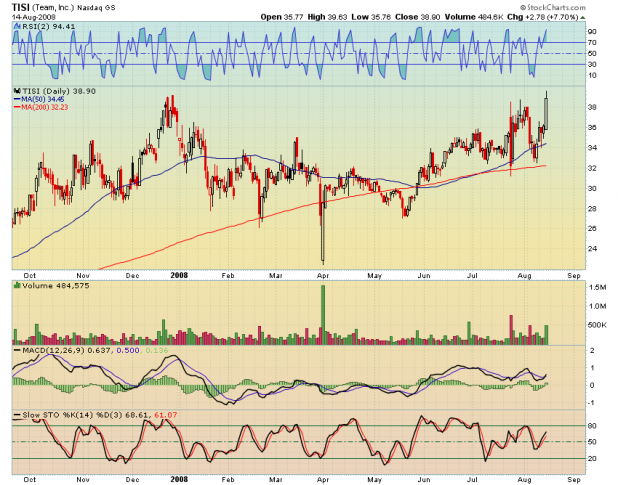 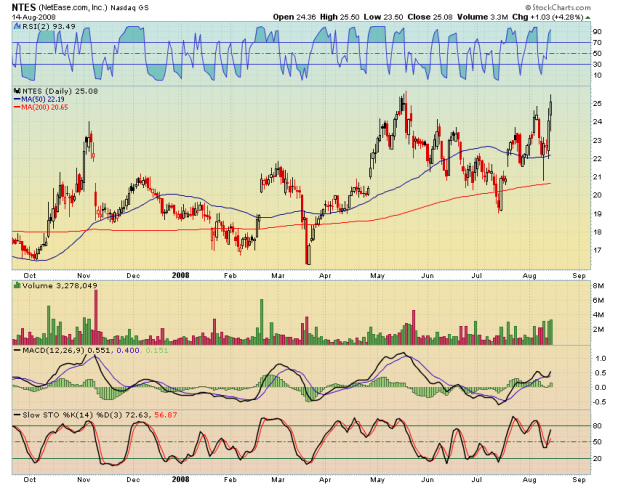 NetEase.com, Inc. (ADR) [[NTES]] Not the most perfect pattern, but the volume has been outstanding. 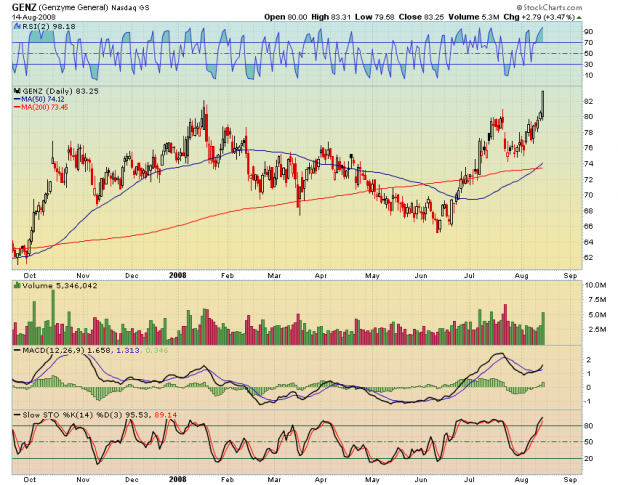 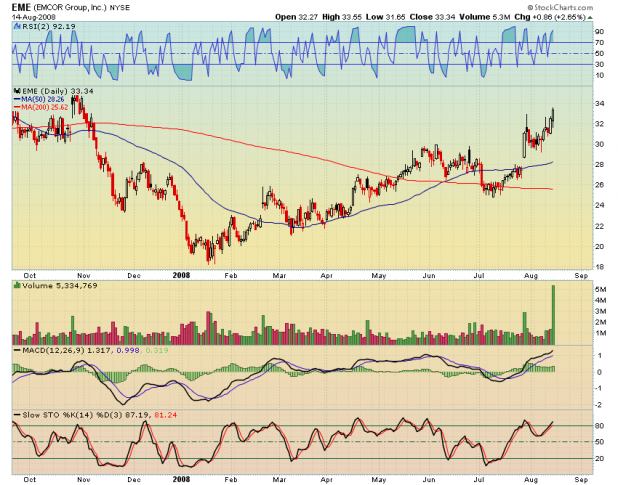 EMCOR Group, Inc. [[EME]] Check out that volume. This one looks as if it may go parabolic.