Big Bamboo: Swing and a Miss

Today, [[DUG]] threw the Big Bamboo a curve ball. It took a swing, and missed.

I bought some at the open and was filled at $53.84, which shows .33 slippage (.6%)Â from the listed open. I was stopped out, as was the system. I used a 6% stop (rather than the 4% being tracked)Â to give it some room. The volatility makes for challenging risk management. There are starting to be questions in the comments section about alternative stop strategies. I’ll try to get to that soon, in an upcoming post.

Note the yellow highlighted cell. Had a stop been set based on Friday’s close, the real risk of the trade would be almost double the expected risk due to the gap up.Â I cannot emphasize enough the importance of stops that automatically offset from a market order entry.Â

The loss on this trade was slightly more than the expected 1%.

No New Entry Signals for Tuesday

END_OF_DOCUMENT_TOKEN_TO_BE_REPLACED

On Fractals and Crashes: Part 2

Side Note: Michael Stokes from MarketSci Blog just published a similar, but better articulated piece on standard distributions and the markets. Fat Tails, Normal Distributions, Random Walks, and all that Jazz. Since his thoughts mirror mine, and are therefore somewhat self-similar and recursive, I thought it would be neat and geeky to link back in his blog in this post about fractals.

A fractal is generally “a rough or fragmented geometric shape that can be split into parts, each of which is (at least approximately) a reduced-size copy of the whole,”[1] a property called self-similarity. The term was coined by Benoit Mandelbrot in 1975 and was derived from the Latin fractus meaning “broken” or “fractured.”

A fractal often has the following features:[2]

Because they appear similar at all levels of magnification, fractals are often considered to be infinitely complex (in informal terms). Natural objects that approximate fractals to a degree include clouds, mountain ranges, lightning bolts, coastlines, and snow flakes.

Fractals in Nature (from Wikipedia Fractals)

Trees and ferns are fractal in nature and can be modeled on a computer by using a recursive algorithm. This recursive nature is obvious in these examples. A branch from a tree or a frond from a fern is a miniature replica of the whole: not identical, but similar in nature.

A fractal that models the surface of a mountain (animation)

Perhaps the most famous of all fractals are the computer generated ones often found in art, screen savers, album covers, and t-shrits. These fractals are typically generated by the Mandelbrot Set, named after Benoit Mandelbrot. The Mandelbrot Set has become popular outside mathematics both for its aesthetic appeal and for being a complicated structure arising from a simple definition.

What Does This All Have to Do With Market Crashes?

At this point, I’m sure fractals seem to have very little relationship to markets and market crashes. While I had hoped to have covered fractals in one article, it appears I’m going to have to flesh out fractals in 2 parts.

For now, the two most important things to remember about fractals (and the financial markets):

A good portion of this piece is from various Wikipedia articles. I believe I have linked to the appropriate pages to give credit where it is due.

For the ultimate web-based guide to fractals, one must visit the site of Michael Frame, Benoit Mandelbrot, and Nial Neger Fractal, housed at Yale. This is a fantastic resource.

END_OF_DOCUMENT_TOKEN_TO_BE_REPLACED

On Fractals and Market Crashes: Part 1

“Lastly, the cotton story shows the strange liaison among different branches of the economy, and between economics and nature. That cotton prices should vary the way income does; that income variations should look like Swedish fire-insurance claims; that these, in turn, are in the same mathematical family as formulae describing the way we speak, or how earthquakes happen–this is, truly, the greatest mystery of all.” –Benoit Mandelbrot 2004

If there are any economists, investors, or scientists who still believe the movements of the financial markets follow the standard (Gaussian) distribution, 2008 has likely shaken their foundations and fractured their paradigms.

A quick calculation of the Standard Deviation of one day’s close to the following day’s close (in percentage terms), from October 1, 1928 to October 24, 2008, is below. The calculations show that the average daily change on the Dow Jones has been .024%, with one standard deviation being 1.15%. Already, we see the daily change can vary greatly from the average change.

These large variances in the Dow Jones data should not be present, unless the day-to-day changes are not normally distributed.

For the rest of this article, I will then assume, as I believe it to be true, that the financial markets cannot be described within a Gaussian distribution.

Of course, to know that financial markets do not conform to a standard distribution is to understand that the Capital Asset Pricing Model, along with Value At Risk and Beta; Black-Scholes Formula and the Modern Portfolio Theory, are hopelessly and inherently flawed.

Indeed, the recent bear market has proven the financial markets to be much more volatile and risky, and anyone using the above models and theories to manage risk are likely finding themselves having to re-work all their models and risk-management formulae. Should they continue to rely on a standard distribution, they will forever be re-working their models, assuming they are not first ruined by them.

Since I have thrown out the idea that the market’s movements will be contained within X standard deviations from the mean, it is then crucial to digest and internalize this:

There is nothing to stop the markets from experiencing large and devastating losses, of a magnitude never before witnessed.

Part 3 will synthesize parts 1 and 2 in a discussion of why and how markets crash.

Benoit Mandelbrot is the expert on this topic. His latest book, The (Mis) Behavior of Markets is a must read for anyone interested in fractals and the financial markets.

END_OF_DOCUMENT_TOKEN_TO_BE_REPLACED

The new entry signal is highlighted on the sheet in a pleasing blue hue. Recorded is Friday’s close. The sheet uses Friday’s close to calculate a 4% stop, which is necessary to calculate the position size. At the top of the sheet, our 1% risk level per trade has climbed to $614.00, which allows the system to purchase 297 shares of [[DUG]] . As the purchase will be made on the open, if DUG gaps open, the system will beÂ taking onÂ more risk than calculated; if DUG gaps down, it will be taking on less risk than calculated.

As DUG could easily close Monday with an RSI2 of greater than 80, if this trade works, it will likely only last 1-2 days. 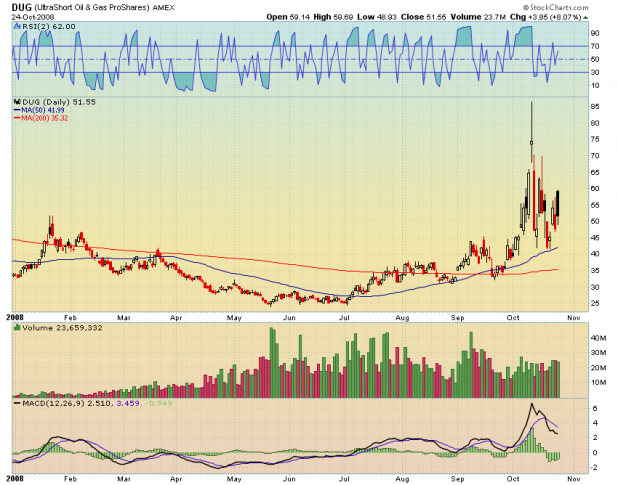 The system also generated an entry into [[REW]] . However, I will override the system and not buy REW due to the RSI2 being greater than 80 on Friday’s close. I had not considered this possibility, which means the trade-by-trades used for backtesting need to be examined to make sure any entries generated with the exit criteria already metÂ get discarded. 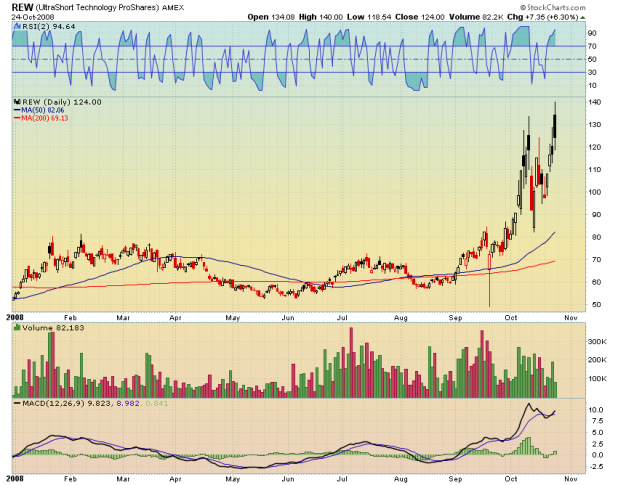 The other issue with REW is liquidity. While it does trade better than SCC, there still may be some severe slippage. The system rejects any diETFs without a 10 day average volume of over 100,000. I would say that REW has barely met the requirements for volume.

END_OF_DOCUMENT_TOKEN_TO_BE_REPLACED

During this time, the Big Bamboo has earned 22.8%, and was onlyÂ fully investedÂ for one day, and only 75% invested for 2 total days.

[[QID]] and [[SDS]] were both closed at the open. Their closing prices and dates areÂ highlighed in a pleasing lime green.

Statistics for Average Percentage Gain per Trade and Average Dollars Gained per Trade have been added to the spreadsheet.

I’m anxious to see if the system will continueÂ its losing streak or if the latest trades were just a blip.

END_OF_DOCUMENT_TOKEN_TO_BE_REPLACED

I have not been making very many trades, due to the fact that my systems were not built to handle the market dislocation of late. Well actually, they’ve handled it very well, as they’ve kept me out, so I guess they were built to handle it.Â The point is, the market has to stabilize a bit more before I’ll start getting regular signals again.

So I decided to take my old nemesis out of the closet and punch him around a little bit, meaning I made some discretionary trades. 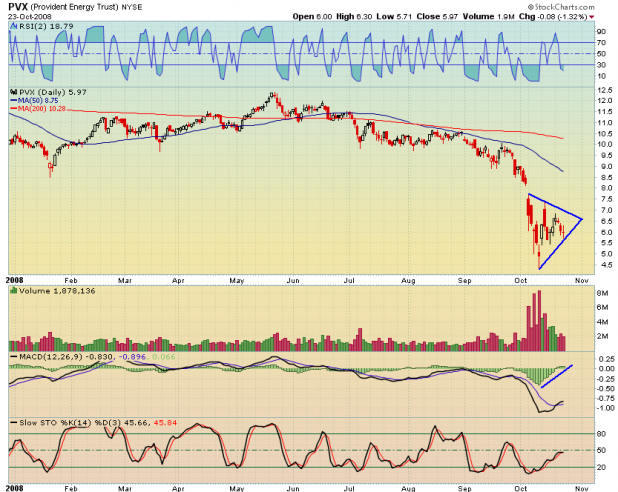 I’ve been watching Provident Energy Trust (USA) [[PVX]] both as a play on yield and a play on the energy markets. I got in today at $5.81 My stop is set just beneath today’s low, so it is tight. I’m expecting managers to chase yield as well as I’m expecting OPEC to intervene and decrease supply. I will likely begin taking profits near the $6.60 range, as I expect some resistance in that area. 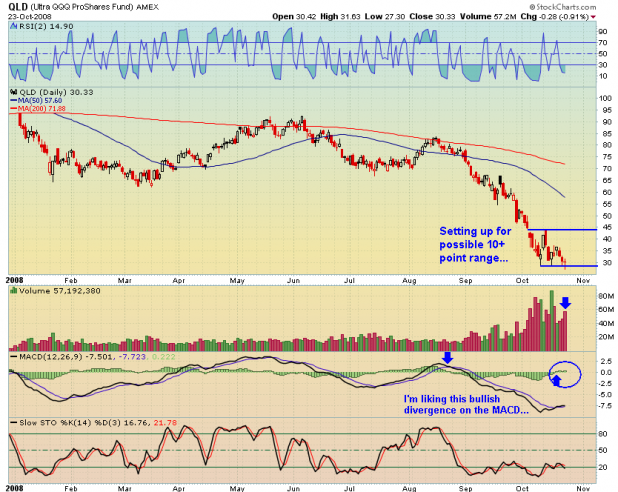 I also bought some [[QLD]] in the after hours market, shortly after seeing the numbers from Microsoft Corporation [[MSFT]] . My stop is placed just beneath today’s low. There is a lot to like about this chart, but my main reasons for buying in are the bullish divergence on the MACD and the (hopefully) successful test of the lows. If this trade does not quickly stop out, I’m going to attempt to hold out for roughly 10 points of profit, which I think can be easily achieved if any momentum can develop on the upside.

END_OF_DOCUMENT_TOKEN_TO_BE_REPLACED

[[SDS]] and [[QID]] both closed today with an RSI(2) greater than 80. This means the exit criteria was met and the diETFs will be sold on the open Thursday.

In the spreadsheet above, both open positions are marked-to-market withÂ today’s closing prices highlighted in yellow.

The system will have generated a 75% win rate, in 8 trades. Based on the backtesting, this win rate is higher than expected and will likely trend lower from here.

I have included charts of SDS and QID to show how the trades looked.

No New Entry Signals for Thursday. 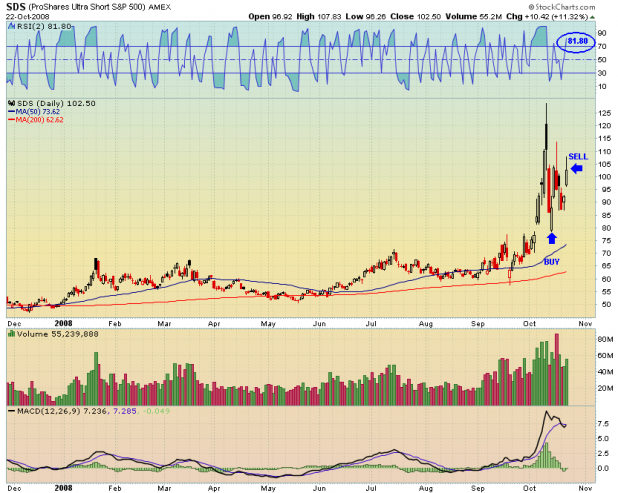 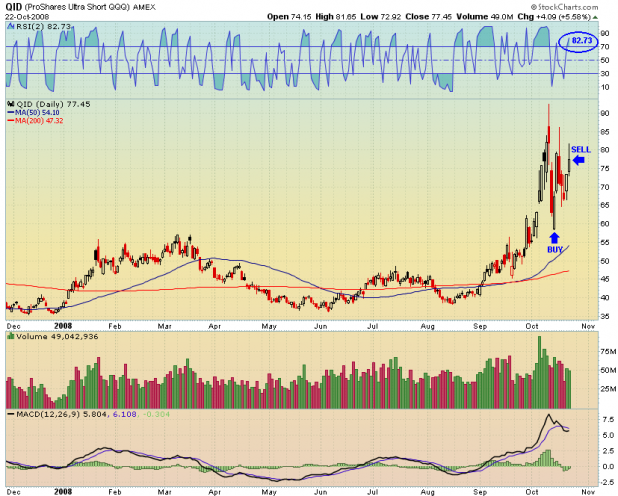