This morning the system entered [[TWM]] and [[SRS]] . It will go into Election Day short. The new positions are highlighted in gold and are marked-to-market as of Monday’s close.

I purchased TWM in my own account and was given a .20 price improvement over the listed open. RealRisk shows that both positions gapped open.

TWM came within 5 pennies of stopping out at the 4% stop level, if the stop was offset from the actual entry. If the stop was entered based on Friday’s close, then the position did not come quite as close to stopping out.

SRS finished the day up 5.67% from the entry. At this rate, if it meets the exit criteria sometime over the next few days, it will likely be a huge winner.

No New Entry Signals for Tuesday

END_OF_DOCUMENT_TOKEN_TO_BE_REPLACED

I’ve been stymied with a busy work and personal schedule, but intend to resume my series On Fractals and Market Crashes this week.

In the meantime, PBS just released a 1 hour special on fractals. It is able to be viewed online, and is divided into 5 parts to make for easy viewing. The link is below…

Enjoy, and feel free to leave any thoughts generated from the special in the comments section.

END_OF_DOCUMENT_TOKEN_TO_BE_REPLACED

I went back and reviewed over 2 years worth of trades from this system. It has never stopped out more than 5 times in a row before hitting a winner. There was one instance of it stopping out 5 times, hitting two winners, and then stopping out 5 more times inÂ a row.

I do expect that it will soon hit another winning streak, but I could be wrong. It could hit 20 losers in a row. But that is why we are position sizing using 1% risk. For the sake of argument, let’s assume it does hit 16 moreÂ stop-outs, in a row. Because with every loss, each new position will be smaller, we would still show a slight gain for the year, even after 20 losses in a row.

However, what if the system were all in, with 4 positions, and a large overnight gap causes each position toÂ move past its stopÂ more than 4%? That is certainly possible. So lets imagine that scenario happens twice in a row, with all 4 positions losing 8%, instead of 4%. The system would still show a profit for the year.

Running through hypotheticals like this is beneficial for the system trader as it can create a mentality that is strong and resolute. The system trader should be able to withstand the inevitable losing streaks without quitting the system, or signficantly altering it. Identifying some worst-case or just pretty-bad-case scenarios, and then calculating how the system would handle those, is a must.

While all of this sounds scientific and fool-proof, it really is not. Some of you may remember that I started tracking this system during a winning streak because I wanted it to start off with gains. What if I would have started tracking it from its first loser? Right now the system would be down around 4%, and the Big Bamboo may not be known by such a favorable appellation. If we were then imagining 20 losers in a row, we would be looking at aÂ drawdown of greater than 20% from starting equity.

Highlighted in a pleasing green hue are the new entries forÂ Monday:Â  [[TWM]] and [[SRS]] .

Another system I trade (which is tracked on Covestor but is not disclosed on iBC) has also generated an entry for TWM. This system, which I call the Power Double Dip, hasÂ made 42 tradesÂ with an 85% win rate during 2008,Â and an ROI of 157%.

But wait, it gets better. As the Big Bamboo will only take 2 new signals a day, I didn’t list the number 3 signal, which is [[MZZ]] . The Power Double Dip strategy is also choosing MZZ to take along with TWM.

I will be entering these diETFs on Monday, but I will be using a different stop strategy from the Big Bamboo. I want to give them some room to move, so I willÂ use a stop distance of greater than 10%.

END_OF_DOCUMENT_TOKEN_TO_BE_REPLACED

The PPT just spit out its godly list of industry rankings.Â They are ranked by their hybrid score, which is a combination of their technical and fundamental scores.Â Above are the top 10.

I have included some charts of most of the Home Health Care group. 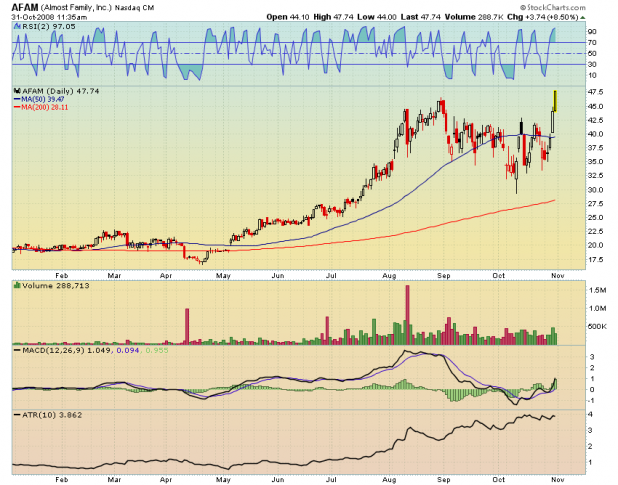 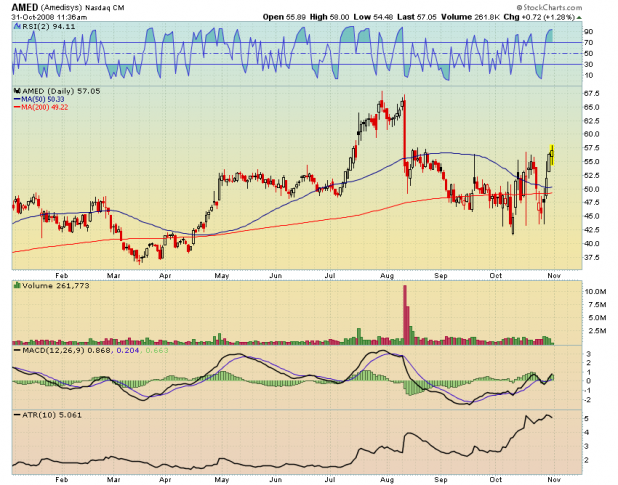 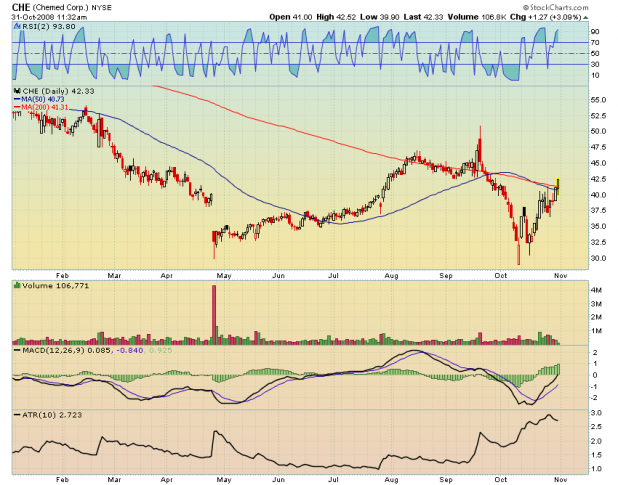 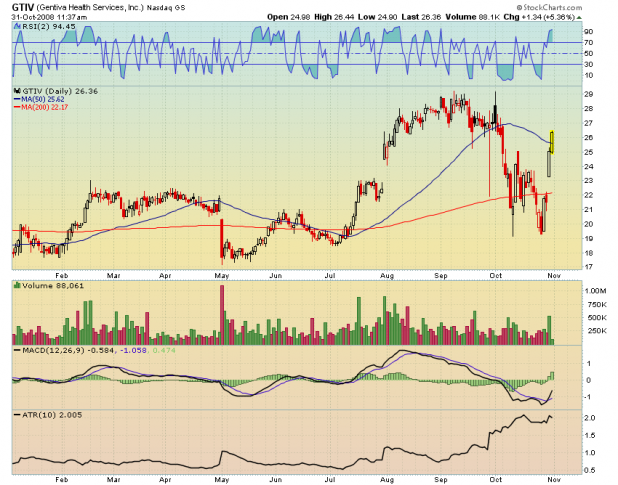 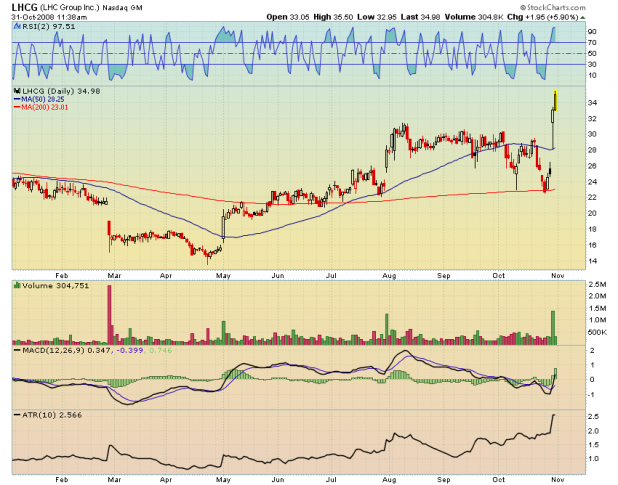 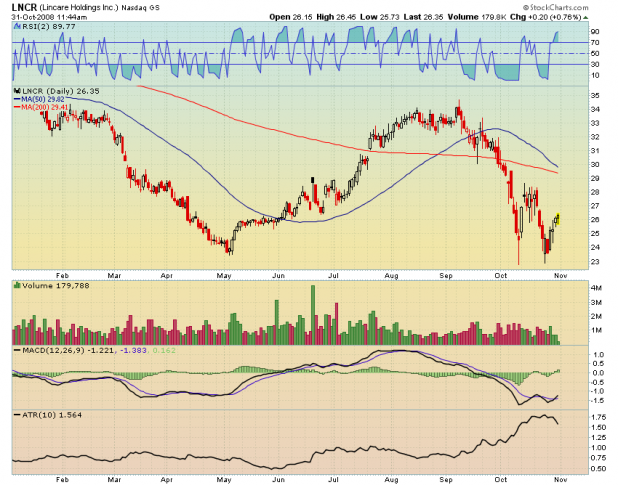 END_OF_DOCUMENT_TOKEN_TO_BE_REPLACED

At the time this was written, the [[SMN]] position was up approximately 4%. The spreadsheet has been updated with yesterday’s purchase price of $71.02 As I had hoped, SMN gapped down hard, and the system bought the gap down. The trade was in the green for almost the whole day yesterday, and that is what I mean when I say that these diETFs can be traded with a tight stop, as long as you are on the right side of the trade from the very beginning. At one point yesterday, the trade was in the money by 10 points.

The RealRisk and stop levels have been left unchanged in the spreadsheet to show the effect of the gap down. The RealRisk shows that SMN gapped down over 5% past our projected stop. Remember, this is a good thing, unless you had set your stop the night before. If you did, I do not think the position would trigger. The 4% stop, based on the entry, is set at $68.18

In my own account, I bought SMN on the open, and received a fill of $70.81. This price shows slippage in my favor by .21 better than the listed open.

Good trading today, and have a good weekend.

END_OF_DOCUMENT_TOKEN_TO_BE_REPLACED

Big Bamboo: A Trade for Thursday

The signal for tomorrow is highlighted in a pleasing green hue.

The 4% stop on this one seems ridiculously tight. Keep in mind that when the system was first being developed, volatility was high, but nothing like it has been in October. Since this exercise of tracking a system on my blog has several purposes, I’ll continue to have the Big Bamboo keep the 4% stop level.Â I did put up a post with statistics whichÂ showÂ how the system performed using wider stops.

Since stops seem to be a hot topic, I have put up a chart of [[SMN]] with the Average True Range (10) stop levels. I want to talk briefly about the pros and cons of using ATR stops. 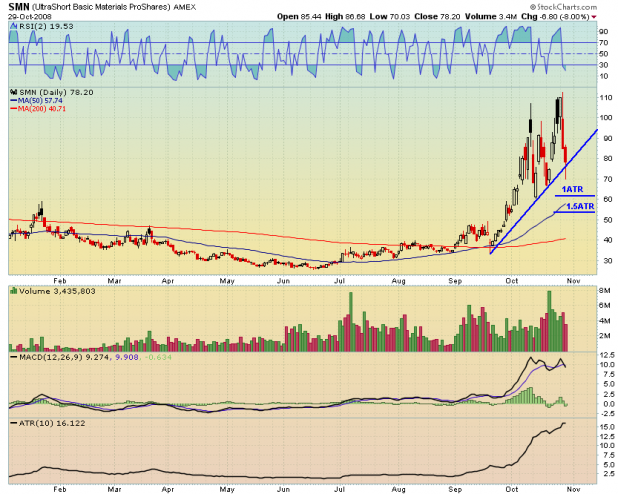 As evident from the lower pane of the chart, ATR has gone through the roof. In one month, it has tripled. On average, SMN is moving 16.12 points a day. That is a huge spread and makes risk management a real challenge.

The 4% stop being used is .2 ATR, or roughly only 1/5 of the average daily range of SMN. This means that if SMN stalls out, or even moves slightly against this position, the stop will likely be hit.

A stop of 1*ATR can be used, while 1.5*ATR is often optimum, in myÂ experience. However, in the case of SMN, a stop of 1.5*ATR means a stop 24 points lower than today’s close. Using such a large stop will mean buying a very very small position. For the Big Bamboo, were the system to use a 1.5*ATR(10) stop, it would be buying only 25 shares. A 1*ATR(10) would have the system buy 38 shares. Seems almost too small to be worth it.

Of course the benefits to using ATR stops is that there is much less likelihood of getting stopped out, which can increase the win percentage of a system. However, it also can decrease performance due to smaller position sizes. As volatility decreases and gets back to a more normal level, ATR will reach a sweet spot where it can keep trades from being stopped out while still allowing for decent position sizes.

For this trade, it might be worthwhile to determine another stop placement, to allow for a wide swing, but also allow for a larger position.

As I write this, S&P futures are up 2.25%. A large gap up tomorrow would be optimum, as SMN will be purchased at aÂ discount to today’s close.

END_OF_DOCUMENT_TOKEN_TO_BE_REPLACED

Long Again, But Not Impressed Yet 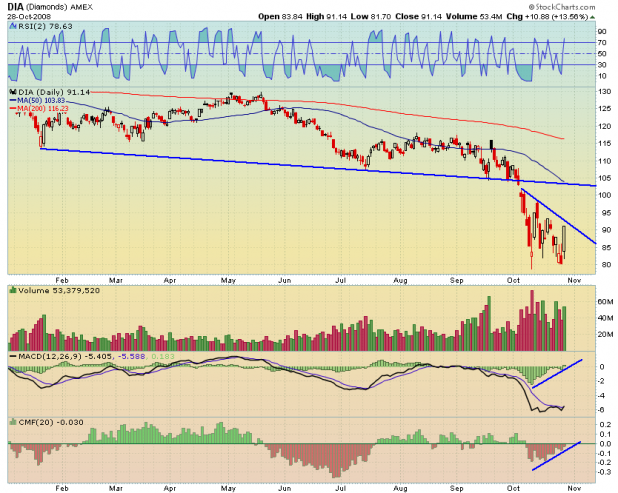 This morning, almost on a whim (I could not remember futures being up throughout the night without selling off into the morning, for many days), I placed a market order for some [[DDM]] . I was not able to check the markets until after 1:00 o’clock, but was reasonably happy with what was going on. I was able to get a glance again at 3:00, and seeing everything look poised for a strong finish, I went ahead and got some [[SSO]] .Â  The unrealized gains helped after getting blown out of my [[QLD]] and Provident Energy Trust (USA) [[PVX]] on the futures-locked-limit-down morning.

I really want to see some follow through tomorrow.

As for the [[DIA]] , the clear bullish divergence was resolved somewhat as the MACD crossed. Also note the bullish divergence on the Chaikin Money Flow. The July CMF move was much larger than the October move. More on that in a second.

Volume was good. A close above the blue resistance line would be very bullish. I am looking for about 10-12% move here before serious resistance is encountered at the 50 day average. 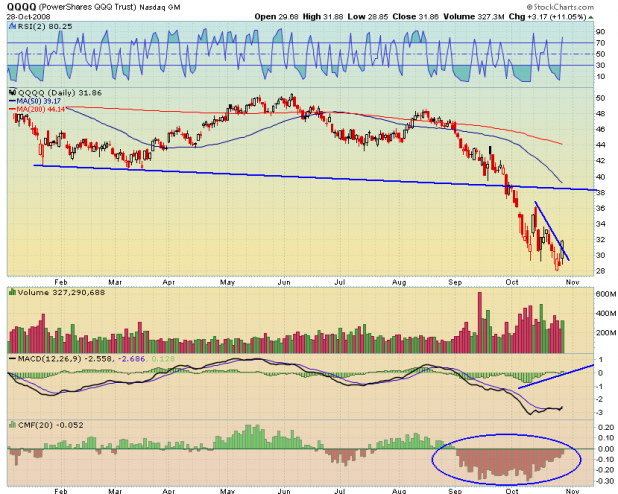 On the [[QQQQ]] , note the large Chaikin Money Flow move in September and October. Compared to the DIA, it appears as if there wasÂ a largeÂ sector rotation out of tech. Does this mean it will lag the other indices? I do not know.

The Qs managed to close just above the sharply declining blue resistance line. However, this is not an exact science. We really want to see the Qs make an obvious move above any resistance at this level.

Again, there wasÂ massive bullish divergence on the MACD. The Qs look as if they could run 15% from here, assuming immediate resistance is cleared. 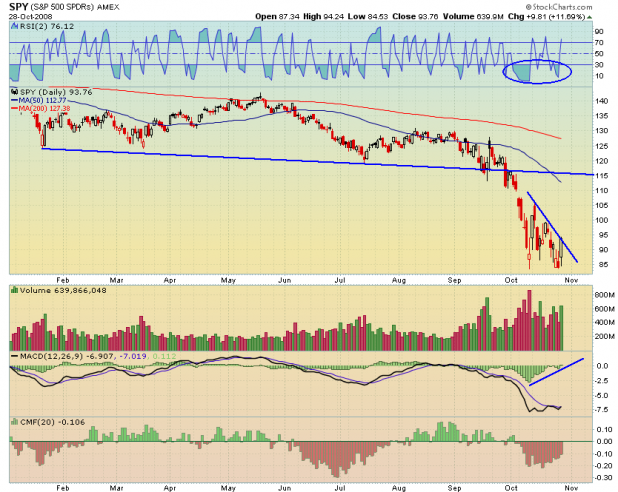 As for the [[SPY]] , pretty much the same analysis as DIA. It needs to clear immediate resistance, quickly.

Similar to the other indexes is the MACD divergence. On SPY, Chaikin Money Flow is also showing a divergence.

Overall, it wasÂ a very constructiveÂ day. Danny’s indicators are showing the most strength in quite some time. I am hoping the markets can put on another impressive performance, Wednesday.