Exploring the $VIX: Looking at Stretch and a Bollinger Band Setup

Tonight while looking at charts I noticed that $VIX traded beneath its lower Bollinger Band. I thought that this might predict a bounce in $VIX and therefore some weakness in the markets. Let’s take a look at the results of this Bollinger Band setup as well as another $VIX stretch setup.

My gut feeling, after seeing $VIX trade beneath the lower Bollinger Band (50,2) in the face of a weak market, was that volatility was too low and should strengthen to match the weakness in the broader market. I created a simple test to model yesterday’s $VIX trade in order to see what has happened in the past.

Buy SPY at the Close if $VIX

This “setup” matches yesterday’s $VIX trade. However, I did also include a test that did not require $VIX to close above the upper BB. No commissions or slippage were included, and all SPY history was included. 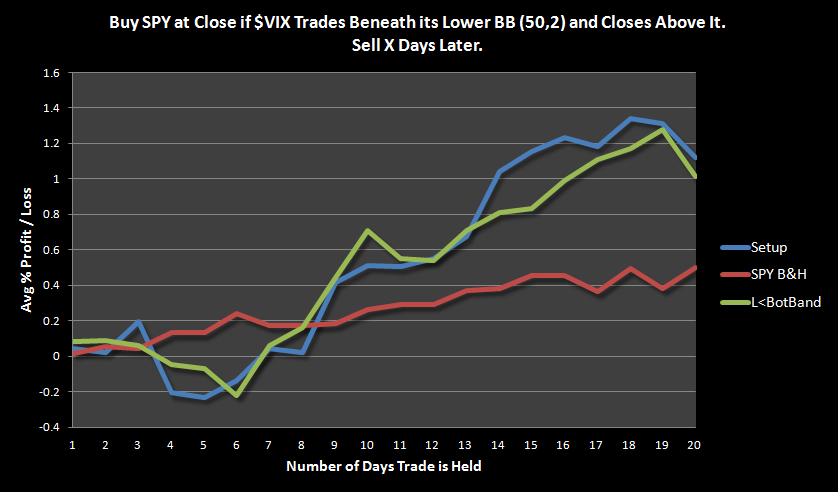 The blue line is the setup as described above. The green line did not require a close above the lower BB. The green line only needs the $VIX low of the day to be beneath the lower BB to trigger a SPY buy. There were over a hundred samples of both of these setups, and over 50 if each trade was held for the full 20 days.

Apparently, based on the weakness of the 5-6 days following the setup, there is a tendency for $VIX to bounce a bit. However, I was surprised to see SPY begin a steady climb once the $VIX bounce was over. I’m guessing this is due to $VIX continuing a slide down the lower BB. I have mentioned this before in other posts. It seems that once price starts trading beneath or very close to the lower BB, it can begin sliding down the lower band, for a lot longer than we would think, before bouncing. This phenomenon can also observed with the upper BB. Note that this setup has performed almost twice as well as the average SPY buy and hold over a period of 20 trading days.

Based on these results, I’m not confident that we’ll see a strong $VIX bounce here.

There are other ways to explore $VIX. Another way is to measure the amount of stretch, or distance from a moving average. Let’s take look at this and compare it to the Bollinger Band setup.

Buy SPY at the Close if:

As always, no commissions or slippage included, and all SPY history was used. 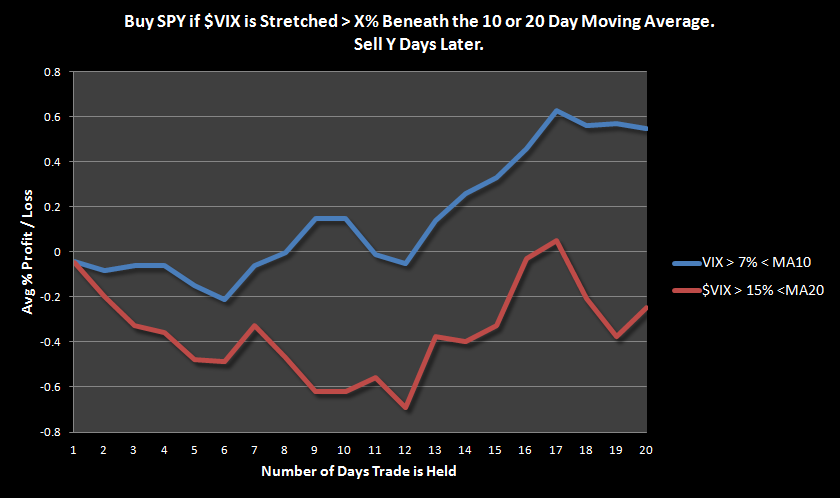 There were hundreds of samples of these setups.

However, the longer term MA20 stretch does suggest that $VIX may be stretched far enough beneath the MA20 that we can predict a $VIX bounce and subsequently some weakness in SPY (the red line).

So there you have it: $VIX studies that are somewhat contradictory. The bottom line is that $VIX has been weak and is stretched beneath its moving averages. It is also trading very close to its lower Bollinger Band. SPY has also been weak. These conditions will not persist. My guess is that SPY will weaken further and we’ll begin to see some of this fear creep into $VIX in the form of higher closes.