Today’s post on what happens after large $VIX one-day gains generated some questions in the comments section. This post will parse large $VIX gains for the fun of it, and to answer the questions.

First, let’s look at the dates for all $VIX one-day gains of more than 25%. Bear in mind that 25% is arbitrary. I chose it primarily because yesterday’s %VIX gain was ~30% and I wanted to increase the sample size.

Dates for $VIX One-Day Gains of More Than 25%

Note that the bulk of the large $VIX moves (15 of 22) have occurred between 2007 and the present. In fact, almost one quarter of all the large moves have happened in 2011, and the year is not yet over. Contrast this with only four one-day gains of more than 25% in 2008.

Now let’s look at all one day $VIX gains of more than 25% when $VIX had closed the day before above 20. 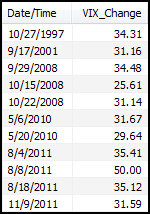 And let’s also see large $VIX moves when SPY was trading beneath the 200 day moving average.

What can we make of this? I’m not sure, really, but I have thought or two.

The 2007 large moves did not occur when $VIX was already trading above 20, and they happened above the 200 day moving average. Perhaps a succession of $VIX surges is a precursor to an extended period of volatility? Especially, when for all intents and purposes, the market is in a Bull phase?

It appears that the singular event of a large $VIX gain is not that big of a deal when the market is above the 200 day moving average and $VIX is beneath 20. While in most cases, after a large move, the market consolidated or stayed range bound for several months or more before roaring back to life, in 2001, there was much more Bear Market ahead. Perhaps 2001 is the anomaly.

What makes the most sense to me is that when $VIX is stringing together large moves within a one-year period, we should expect a Bear Market type of trading environment going forward. In other words, once volatility ramps up, we can expect volatility to persist, until it, ahem, no longer persists.

Perhaps a way to use this information is to bias our trading towards a  Bull Market, low volatility and trending market  once we have traded for X months without a large one-day $VIX gain.