Last week, volume on SPY surged to 175% greater than the 50 day average volume. Does this surge in volume hint that a tradeable bottom is near?

On Wednesday, June 15th, SPY volume surged to more than 175% of the 50 day average and made a new 50 day low. On Thursday, volume again surged. When looking for bottoms, it helps to see capitulation. Volume surges coupled with new lows suggest that capitulation may be occurring.

The wild card, and the major caveat of any current SPY study is that it continues to close beneath its bottom Bollinger Band. Since the bottom band marks 2 standard deviations beneath SPY’s 50 day average, multiple closes beneath it signals that the market is abnormal. An abnormal market can stay abnormal longer than we would like. I have written previously about abnormal markets here. We really need multiple closes above the bottom band before this abnormality is removed. Once this happens, bottom-calling makes more sense, in my opinion.

Anyway, lets look at what the volume surge suggests. 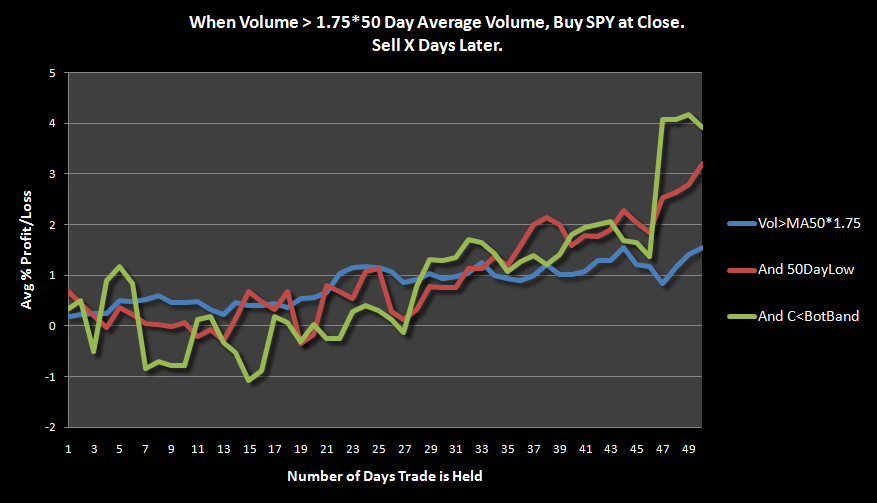 Bottom Line: As noted above, SPY has got to quit closing below the bottom Bollinger Band. Until it doesn’t, we should expect that it will continue. If we ignore the additional factor of the close beneath the bottom band, it appears that the market may be bottoming. The red line is suggesting some consolidation over the next month. After about 25 days, consolidation has ended and over the next 25 days, SPY has climbed 3% on average.

Gold Getting Crushed, Crashed Beneath Lower Bollinger Bands. Is It a Buy Here?