Ideally, we would have bounced today and closed back above the lower Bollinger Band (50,2). In fact, the market was trading above the lower band until the Bernanke speech derailed the rally. This action was disappointing and a bit troublesome.

Since the bands I’m using mark 2 standard deviations below the mean, sustained trading in this area represents an abnormal market. Similar to when the market closes above the upper Bollinger Band, trading beneath the lower band for any length of time can signal that it is a bad time to be looking for a sustained bounce. Tonight’s research demonstrates this principle. Observe the difference in near-term market performance when the market fails to bounce and close above the lower Bollinger Band on the 2nd day.

This is the same graph from the previous post updated with tonight’s research. 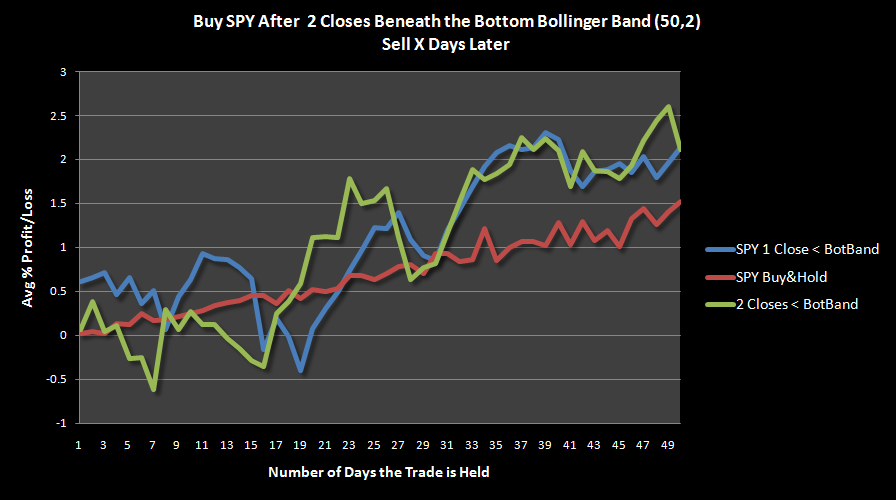 Note that while we are still looking for a bounce over the next couple of days, the intensity of the bounce has been decreased. Bounces after 2 closes beneath the lower band have had a hard time holding onto gains.

Unless something changes, and quickly, it appears that the next 20 days of trading could find us trading lower or consolidating around today’s close, give or take a percent or so.

On the bright side, if past history is any indication of the future, we should be higher than today’s close sometime after July 4th.

On the dark side, we could be starting an extended slide down the lower band. I’m a big believer in symmetry and am worried that after our 3 month melt up along upper band from December 2010 through February 2011, we might have to spend some time melting down along the lower band.