VIX At 2007 Levels–Should You Be Worried?

Some traders watch the VIX as they believe that when it gets too low, it signals that traders have become complacent. From Wikipedia: “Often referred to as the fear index or the fear gauge, it represents one measure of the market’s expectation of stock market volatility over the next 30 day period.”

As the tendency to fade the crowd is strong and Friday’s VIX close was low (relatively), I decided to run a simple test.

Other than these dates, the last time the VIX closed beneath 16 was on July 19, 2007. The more astute market historians may note that July 19th, 2007, was pretty much the top of the market for the S&P 500. Yes, it re-visited those highs in October of 2007, but it was unable to close more than a half-percent higher than the July 19th close.

With the VIX now trading beneath 16, should we be worried?

Buy SPX at the close when VIX closes beneath 16. 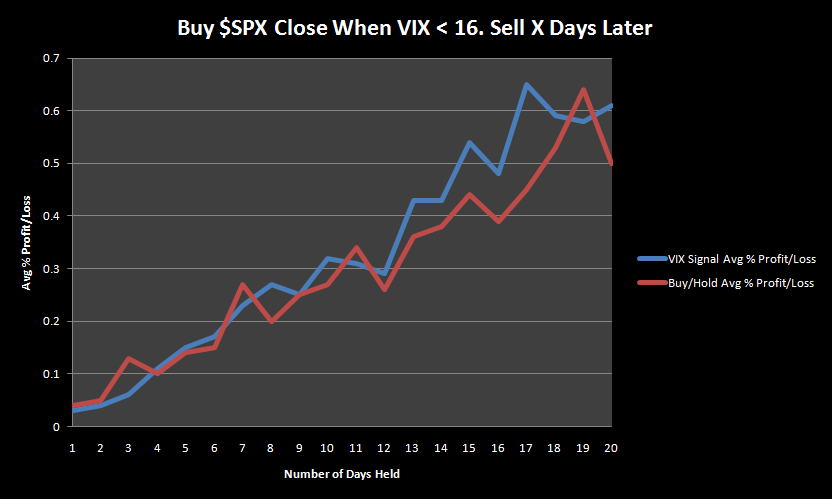 This simple approach suggests that there is not much to be concerned about.

A word about how these results are generated:

To generate the S&P 500 returns, a buy is made and held for 1 day and then repeated, through all the data. These results are averaged. The average is what shown above Day 1. The process repeats by buying and holding for 2 days and then repeated, through all the data, with the results being averaged. That average is what is shown above Day 2. This process repeats until a 20 day buy and hold is calculated.

To generate the returns when VIX< 16, the same process is used except that there must be a signal to buy before the process starts.