Â The account that is tracked by Covestor is traded through the Tradestation platform and brokerage. There have been several times over the last few months when I wanted to locate shares to short, but Scottrade couldn’t find any. In order to take the trades, I had to use my Tradestation account, as they had no problem getting me shares.

As I’m really starting to like this new short-selling strategy, and I’ve already traded it 3 times in my Covestor account, I’ve decided to use the Covestor account from now on to track the strategy. To be clear, the Power Double Dip ETF strategy has been the main strategy traded in the account, but it will now be joined by the new short-selling system.

As the above stats show, the system has been a big winner over the past 2 years. Performance during 2002-2006 has also been respectable.

The system has a very short time horizon, as evident by the maximum hold time of 5 days. The system seeks stocks who have been big winners, but have rolled over. It will then sell these stocks short on strength within the context of a larger downtrend.

The statistics above were generated by an 8% stop. The system can never hold more than 8 shorts at one time and will not enter more than 2 positions in one day. 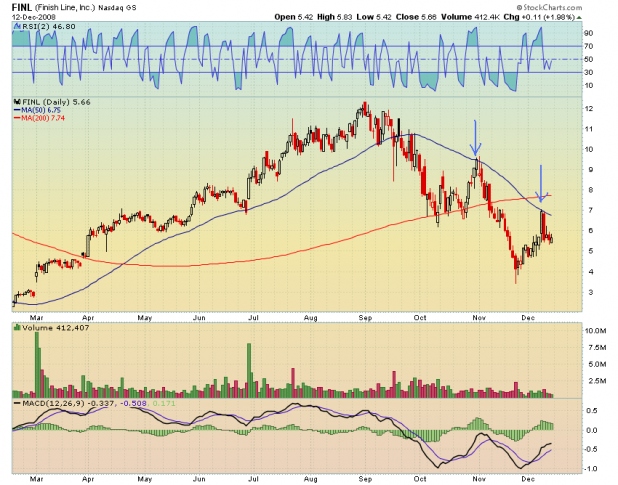 The blue arrows indicate the day the signal was generated. The trades executed on the opening of the next day.

I will not often mention these trades before executionÂ because I am continually concerned about introducing slippage. However, I believe that if someone is tracking me on Covestor that it will letÂ him know when I’ve made a trade.

As always, the entry and exit for this system is generatedÂ 100% throughÂ technical analysis.