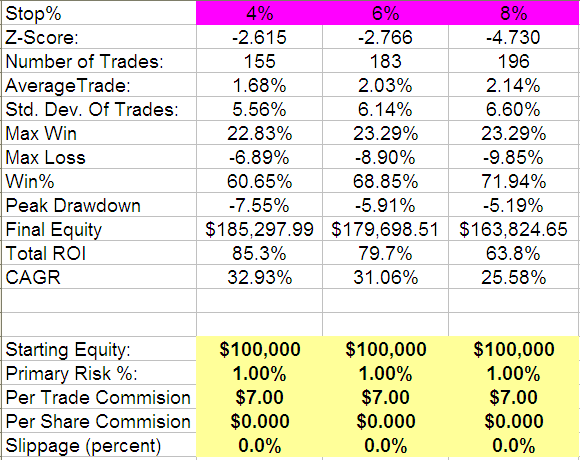 Before I give some explanation of how to interpret the above numbers, I want to give a huge thanks to BHH from IBD Index. Due to his help and expertise,Â my understanding of system trading and backtesting hasÂ increased tremendously.Â  He has been a co-developer of this current system (and others), and is responsible for all of the very cool Excel reports and charts that I will be posting.Â His blog has not recentlyÂ had any of his fantastic reports on system testing and backtesting (probably due to how busy we’ve been working on systems),Â but the archives are must-reads.

The above report shows the statistics for trading this system using variable stop levels and variable percent risk, with commission and slippage included. (Actually, I didn’t add in any slippage). The dates of the testingÂ run from July 15, 2006 to October 3rd, 2008.

To be clear, here is how the position sizing works for this system.Â Assume a starting equity of $100,000.

Position sizing / money management will have a huge effect on any system and should be the top priority for testing, after the entry and exits. Viewing the systemÂ in these termsÂ allowsÂ the traderÂ to decide the optimum level of risk so that he may meet his goals while still being able to adhere rigidly to the rules. A system with huge profits and huge drawdowns may be just as bad as a system that does not generate high enough returns.

Z-Score: Read a primer on Z-Score here: Profiting from the Z Score, and here: Z Score

As this system has a Z-Score ranging between -2.615 and -4.730, we can assume with a high degree of certainty (at a confidence level of greater than 99%) that streaks longer than would be expected in a random distribution may occur while trading this system. This includes winning and losing streaks, but the Win% shows that the winning streaks are longer than the losers. To be clear, once this system starts hitting winning trades, it will continue to win. Similarly, once a losing trade or two happens, we know that it is more likely to continue losing than it is to start a new winning streak. This is why proper position sizing is of the utmost importance. I like 1% risk becauseÂ that allows me toÂ weather 10 losing trades in a row with only a ~10% drawdown.

CAGR: Compound Annual Growth Rate on this system is promising. The system stayedÂ near flat for more than the first year of testing (equity curve to follow in another post). It should be noted that the YTD CAGR on the 4%Â stop systemÂ is currently running at ~95%.

Here are the results: 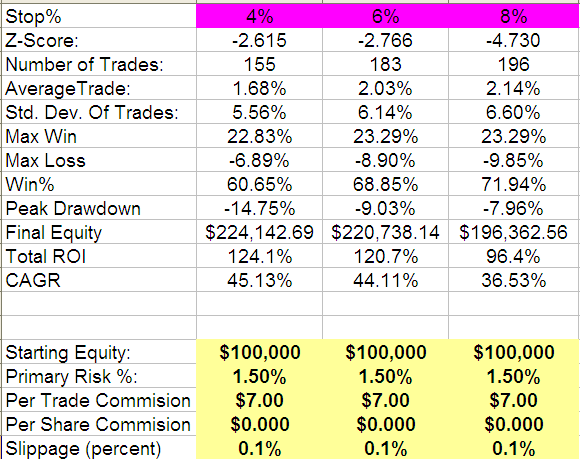 Note that I added .10% of slippage per trade, as well as increasing the percent risked per trade. CAGR is now a very respectable 45.13% on the 4% system.

Also note that the peak drawdown is now -14.75% (and since the future is often very different from the past, we should assume the next drawdown will be even larger).

A Final Note about Adapting the System to Market Conditions

If we know the system is prone to long winning andÂ losing streaks, what if percent risk were increased with each winning trade, and then reduced on each successive loser? Sure,Â the first losing trade after a long streak of winners would be for a large loss, but that might be mitigated by the pyramid of profits before that loser hit. And then, each loser would get successively smaller, until another winner occurs.

We have done some preliminary studies on this topic, but have not yet developed aÂ robust method for applying this strategy of adjustable percent-at-risk.

More really cool graphs, including equity curves of each stop level, trade distributions, and a chart of the drawdowns.