As I sit down to eat my luncheon of delicious Ikea Swedish MeatBalls I notice a few market-oriented trivia.

Europe is the home of degenerate, bankrupt Socialists. The only thing they have left is to keep printing Euros to buy their Sovereign Debt so they can avoid a Greece-like outcome. But its coming.

The British Pound is about to get flattened because they are not on the “winning” Euro Team. Non-conformity is dealt with harshly.

The Japanese have seen the future and their government is mandating to the Central to “print print print” in order to prevent falling prices. Because inflation is better than deflation. And their market will soon be at 15k. Why fight it? The elderly love high prices!

Since we are Japan, soon any pretence of Central Bank independence will be an afterthought and Congress will mandate the direct aquisition of newly printed digi-dollars to fund government spending. Why should banks have all the fun? In fact, the President will soon cut taxes for everyone as tax revenue will no longer be needed.

Our market is testing all time highs, but first quarter fundamentals will be very disappointing. In the world of “The Costanza Market” (Registered, Trademarked), weakness equals strength, sorrow equals happiness and disaster equals a generational opportunity.

The end of the month is upon us and we are buffeted (no Warren) by HFT Algos dictating the minute by minute action. My suggestion? Buy, buy, buy, for the New High! And know that the Feds Jawboning with regards to QE is total bullshit. Any momentary dip in the indices is simply transitory. They will not stop pumping while Obama is President, period. Get used to it. I know you are.

END_OF_DOCUMENT_TOKEN_TO_BE_REPLACED

As I sit in my underground bunker and take stock of the survival supplies and the mountain of uncut diamonds stored here, I can’t help but notice a few varietal market observations:

As the late Marty Zweig used to say, “Don’t fight the Fed”. But what he didn’t take into account is the absolute falsehood that must be realized to participate in this, the final phase of the Fed-induced somnambulant market gains. The stock market was, is and will continue to be the primary tool of economic policy, manipulated higher at any cost. The Bernanke Plan has been the most successful government policy since the Marshal Plan.

Everyone just loves to sight the “Discount Model” or some other such nonsense. Things that might work for a time in a “normal” economy, one that doesn’t need “rescue” through the manipulation of interest rates and the outright printing of high-velocity money. Especially since that “money” never leaves the tightly closed loop of financial assets in the financial system. Every bullish market participant is fooling himself as to why they and their clients need to buy.

It is all about the free money printed by Central Bankers in Europe who buy the debt of bankrupt countries hand over fist. It is about the Japanese “directing” their markets to a target and printing the trillions of yen needed to get there. It is about the Federal Reserve that has directed there be no criminal prosecutions in the greatest mishandling of capital since forever. It is the Federal Reserve that instructs the Primary Dealers to buy every bond that is issued by the government thereby funding its deficit spending and then buying those bonds directly from those Primary Dealers at a profit to said dealers. It is the Federal Reserve that is buying the failed Mortgage Investments from banks that the banks cannot sell, at face value, and allowing those said banks to buy fresh financial investments with that fresh cash.

Normally, when governments prints massive amounts of currency, there is hyperinflation and massive devaluation. But as long as the capital stays LOCKED in the markets NEVER to leave, there will only be the inflation brought by the higher prices of financial assets, including commodities used by producers and consumers alike.

You’ve been told that it is a great financial experiment and these efforts are designed to stimulate the economy and create jobs. That is a lie. It will not create jobs and only stimulate the investment economy, nothing more. And now, with this new year of 2013, everyone who has doubted or missed out, professional or layman, feels like they must play catch up because its been guaranteed through past gains and promised of “doing whatever it takes”. And we’ve seen the reality of a strong second half of the year followed by a slow first half. So dissapointments are sure to come.

We’ve reached the point in the market cycle where nothing, no economic reality, no news, no natural or man made disaster, no conflict, no event, no price, virtually nothing you can imagine will interfere with the need to get that money into the markets.

This is the beginning of the euphoric phase where markets and policy makers can do no wrong, even if it is economically wrong. And having learned from the “Fiscal Cliff”, that any weakness is just another buying opportunity.  It is the phase, several years into a “recovery” where the only end is a parabolic blow off to new all time highs in most of the world’s market or if the system completely breaks. I don’t know how that break will happen or exactly what it will look like, but if it happens you won’t have to worry too much about your portfolio.

END_OF_DOCUMENT_TOKEN_TO_BE_REPLACED

Race to the Bottom? Are You Sure? (click link for full size!) 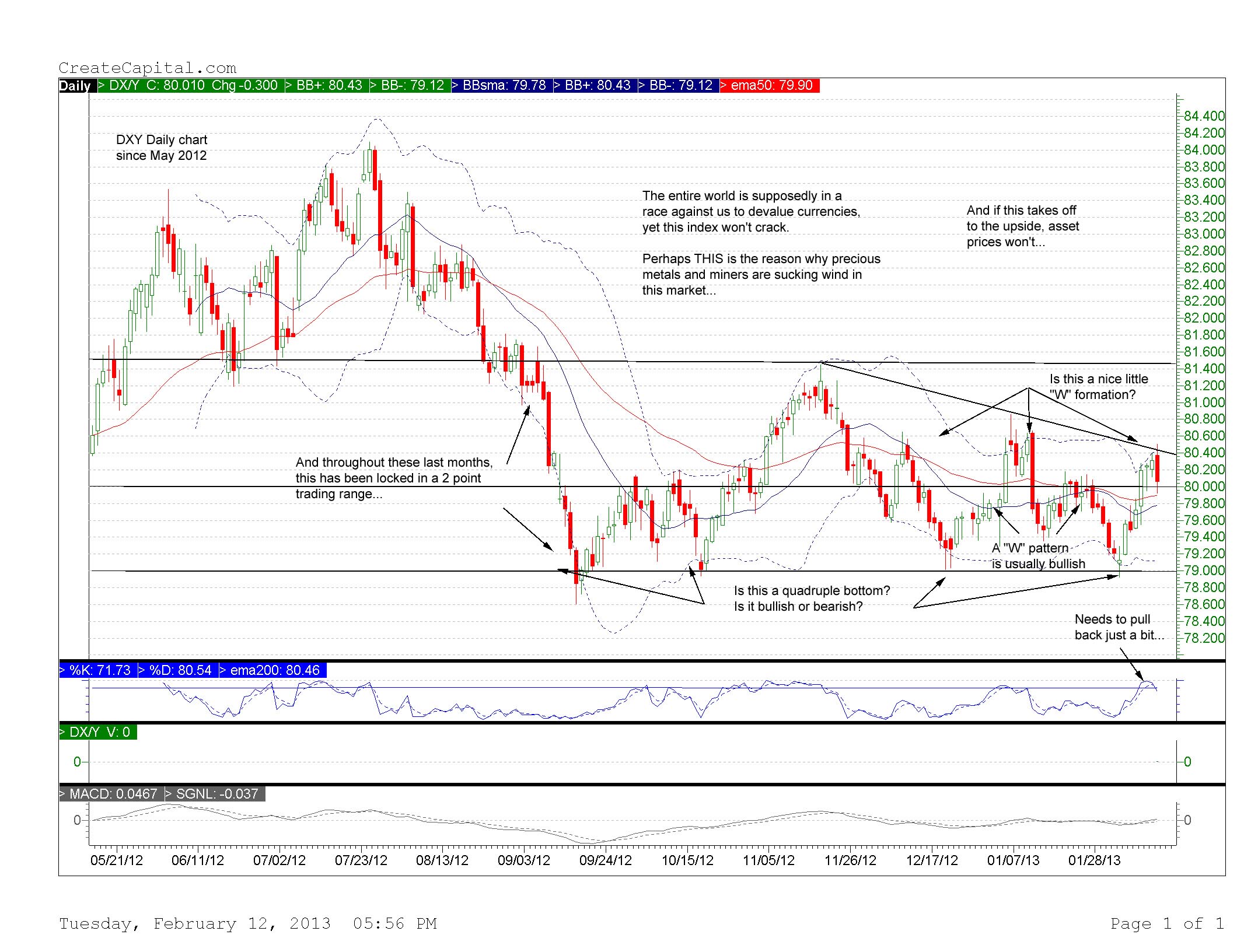 END_OF_DOCUMENT_TOKEN_TO_BE_REPLACED

Are you a “professional” money manager? How did you do last year? Flat? Single digits up?

Well, now you are getting the exquisite pressure brought to bear by clients who are falling behind in the performance of the major indices for the third year in a row. And it is a pain like no other because you are not doing your job.

You see, when markets go down and you lose about the same as the major indices, you are in the same boat as most everyone else who is “invested”. But when you can not even keep up with the junky Dow Jones Industrial Average, then you are clearly incompetent, period–end of story.

You will lose your assets under management and your income and there may be no worse fate than that.

Now that the economic basket case known as Japan has a soaring equity market based on the Bernanke Playbook, there is nobody left to fight the FED. In fact, Roubini, better know as Dr. Douchebag, has thrown in the towel stating that markets will rise for a while “no matter what” based on money printing.

The Fed and Dr. Bernanke have reasserted America once again as the world’s financial leader and market records are just a stone’s throw away. The expensive will get more so and the cheap will become expensive. There is hardly an area of the equity market that will be left behind.

We outlined this plan, specifically, in 2009, and it is now signed, sealed and delivered and will continue until it breaks, even if there is a scary little dip. $85 billion per month will do that.  Prepare for Bull Market Geniuses everywhere. Enjoy!

END_OF_DOCUMENT_TOKEN_TO_BE_REPLACED

Just like several other segments of this four year Bull Market built on Free Money, this past several weeks have been historic in their extreme. Like past surprise announcements of QE, markets lifted with the most extreme levels of market sentiment, internals, overbought, etc. So much so that the rule books have been re-written. All told, the trillions from around the world have served to buy a guarantee of new highs in the civilized world’s Bourse’s (Japan the exception).

We are now here, a spit from all time market highs. And now, NOW, media is promising that the individual investor is coming back en mass.

There is hardly a news event that could derail it. It is a foregone conclusion, and implicit guarantee. But you cannot buy an individual stock because individual stock volatility is off the charts. Overall market movement has been vanquished, with one direction being the norm. Even bond yields have ticked up to the high end of their trading range.

Corporate America only spends and hires if their stocks are rising. When they don’t rise, they don’t spend. Forget about people getting jobs. The Investor Class can spend enough to bolster spending. The markets are screaming: fuck the 47% as they are hopeless and they simply don’t matter. This is gospel fact. Bernanke’s plan is working.

The discomfort level for non-participant and assorted wallflowers is now off the scale. They are feeling as sick to their stomachs as the long and wrong group are when markets are crashing. Remember those times? I didn’t think so.

This heady lopsided phase only ends with a parabolic blowoff to new highs before an extended period of distribution sets in. But this month can happen over and over again with $85 billion per month. And there will never be any consequences.

END_OF_DOCUMENT_TOKEN_TO_BE_REPLACED

Someone is in an Awful Big Hurry…

Today is historic as implied volatility is zero for the major indices and has been replaced by individual equity volatility. Google up 50, Apple down 50, Netflix up 40 and a myriad number of stocks up or down (mostly up) 5, 7, 10% today, most on no news. There are a lot of stocks looking very parabolic today.

I assure you that the money is not coming out of bonds in what the media calls “the Great Rotation”. It is simply Apple money combined with the new, freshly printed digital cash being used for the financial assets that have been targeted for inflation and levitation: equities. And it is costing the taxpayer nothing! Not one penny.

And that the most over-owned, over-loved and overvalued stock should lose $50 billion today and have zero negative effect on the overall market proves how hard our government is working.

Looking at individual stocks is downright scary as what goes up usually comes down. But most “investors” won’t notice. Instead it is all about the major indices making multi year highs and the SPX getting above 1500 and now just a few dozen points away from its all time high.

I find it ironic that the President most hated by the “rich” is the greatest President for the rich. Say goodbye to Geithner as today is his last day on the Government payroll. This rally is his sendoff.