Dark arts descend upon the super american football match up

Canned water dealer Liquid Death hired a real-life witch to cast a hex on the Rams during tonight’s Super Bowl match up.

How far have we strayed from the god of christian lore? Throughout the sports game a witch will be cursing those holy Rams and their Matthew Stafford, summoning the powers of bealzibub in the name of profit and marketing.

Contrary to the bets of football gamblooors, my fate rests in the hands of algorithms cobbled together by a ragtag group of online misfits. Said algos have me leaning bullish into a super intense week. When fortuna’s wheel spins, I prefer to have my footing on solid ground — not superstitions. I’d rather base my gambles on whale migrations that god or the devil.

NEWS: The U.S. believes Putin has decided to invade Ukraine and communicated those plans to the Russian military, three officials tell @nickschifrin. Two admin officials say they expect the invasion to begin next week—echoing what Secretary of State Blinken has said.

Tensions are running high economically and geopolitically — one in the same.

The last thing we need is a battle. What this world needs right now is calmer, darker minds to prevail. The Rasputins of the world. Folks who drink reindeer piss and wander around talking to trees.

If these power-hungry meat-hounds keep up this cock-measuring contest. We’ll all be fucked. Living underground, fighting off radiation wolves and eating Raul’s pumpkins.

I intend to take the week slowly.

There are hot trader accounts on twitter who swear by actively trading these highly volatile markets. I tend to step aside and let them mash each-other’s books. Then, once the storm recedes, I sort of drift back in and pick up the pieces.

The nice thing is I still don’t have my tools. So I don’t feel pressured to take action.

I made an error last week. Shooting from the hip in the NASDAQ futures market. It worked out and I captured two stacks of fiat american dollars. That is trouble. I SHOULD not and WILL not trade like that again.

I suppose I am cautiously bullish with an eye on capital preservation?

And now the 3745th edition of Strategy Session. You know it’s getting dodgy when the Marcus Aurelius quotes come out.

Raul’s bias score 2.73, neutral. No clear bias. Perhaps a rally early in the week. Then look for the reaction Thursday morning (after Nvidia and Walmart earnings) to dictate direction into the weekend (long holiday weekend, markets are closed next Monday in observation of President’s Day).

Choppy through Tuesday. Rally Wednesday. Reversed lower Thursday and hard selling through Friday and into the weekend. 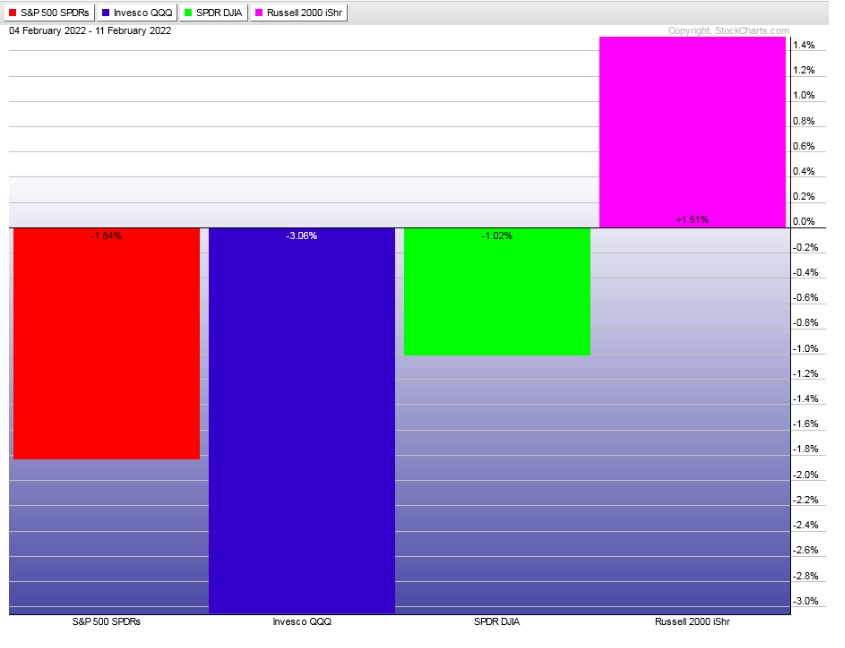 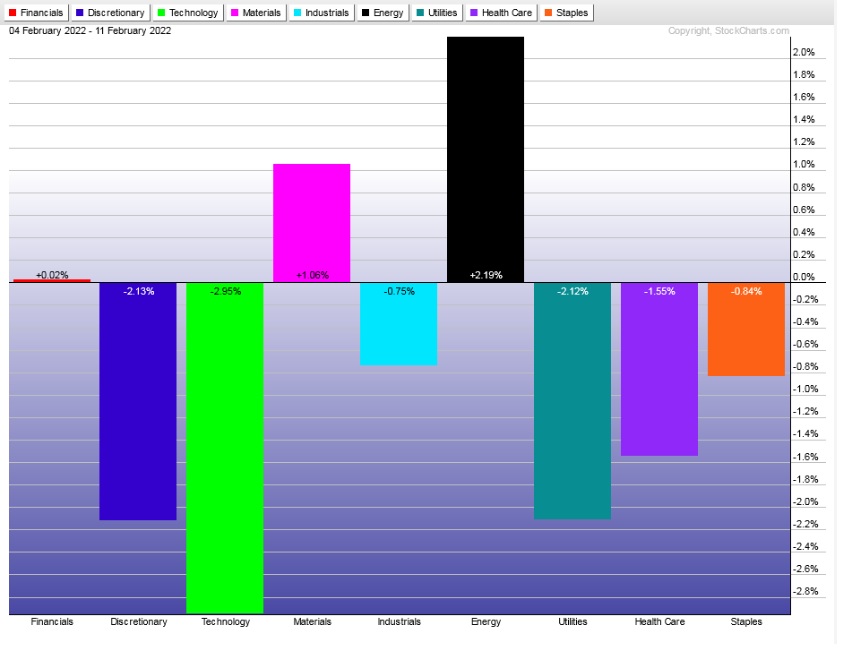 The selling skews over the last thirteen weeks have been dominated by sellers. Last week buyers skewed the ledger but these aren’t really the type of industries that drive the market.

We operate independent of news as much as possible. But one cannot simply ignore invasion headlines like the ones put out by DC journalists last week. We have an overbought cycle (bullish statistics) through end-of-day Tuesday. That is the only systematic signal we’re working with heading into the week. I am inclined to lean on that stat as long as Russia does not invade Ukraine.

No clear bias. Perhaps a rally early in the week. Then look for the reaction Thursday morning (after Nvidia and Walmart earnings) to dictate direction into the weekend (long holiday weekend, markets closed next Monday in observation of President’s day).

N/A (did not update model) 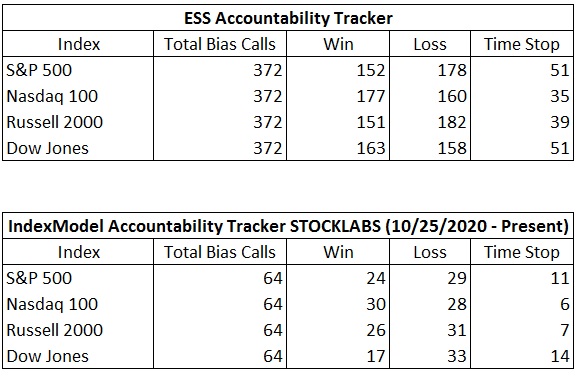 Ether discovery down matured, others not so much

Transports still look like they are in discovery down, but the long-term balance outlined below may serve to stabilize price back into balance. 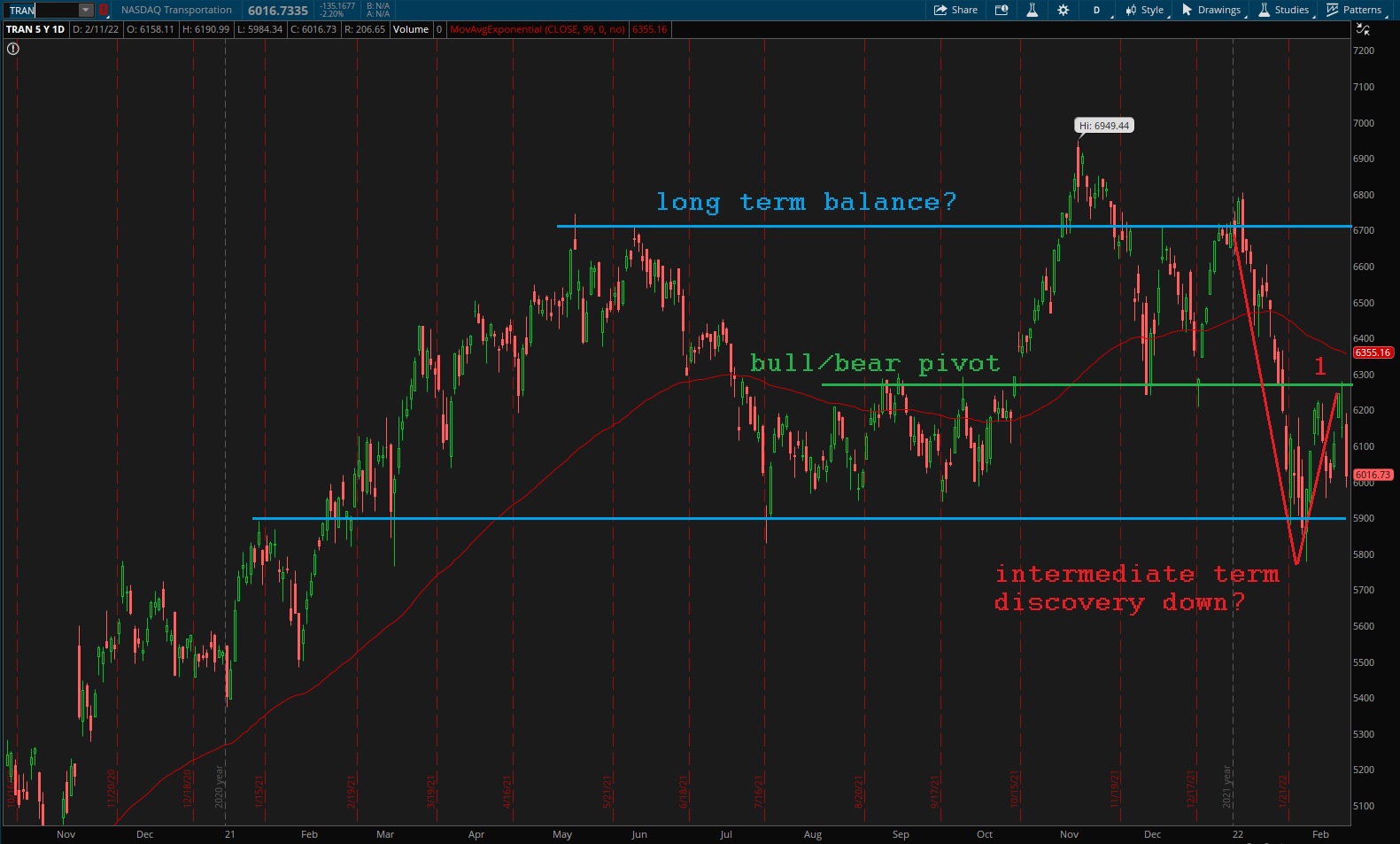 Semiconductors have that old failed auction above. Not a good look for bulls. Then last week we saw a clear conversion of support into resistance. If this chart starts to accelerate to the downside, expect the entire equity complex to follow. 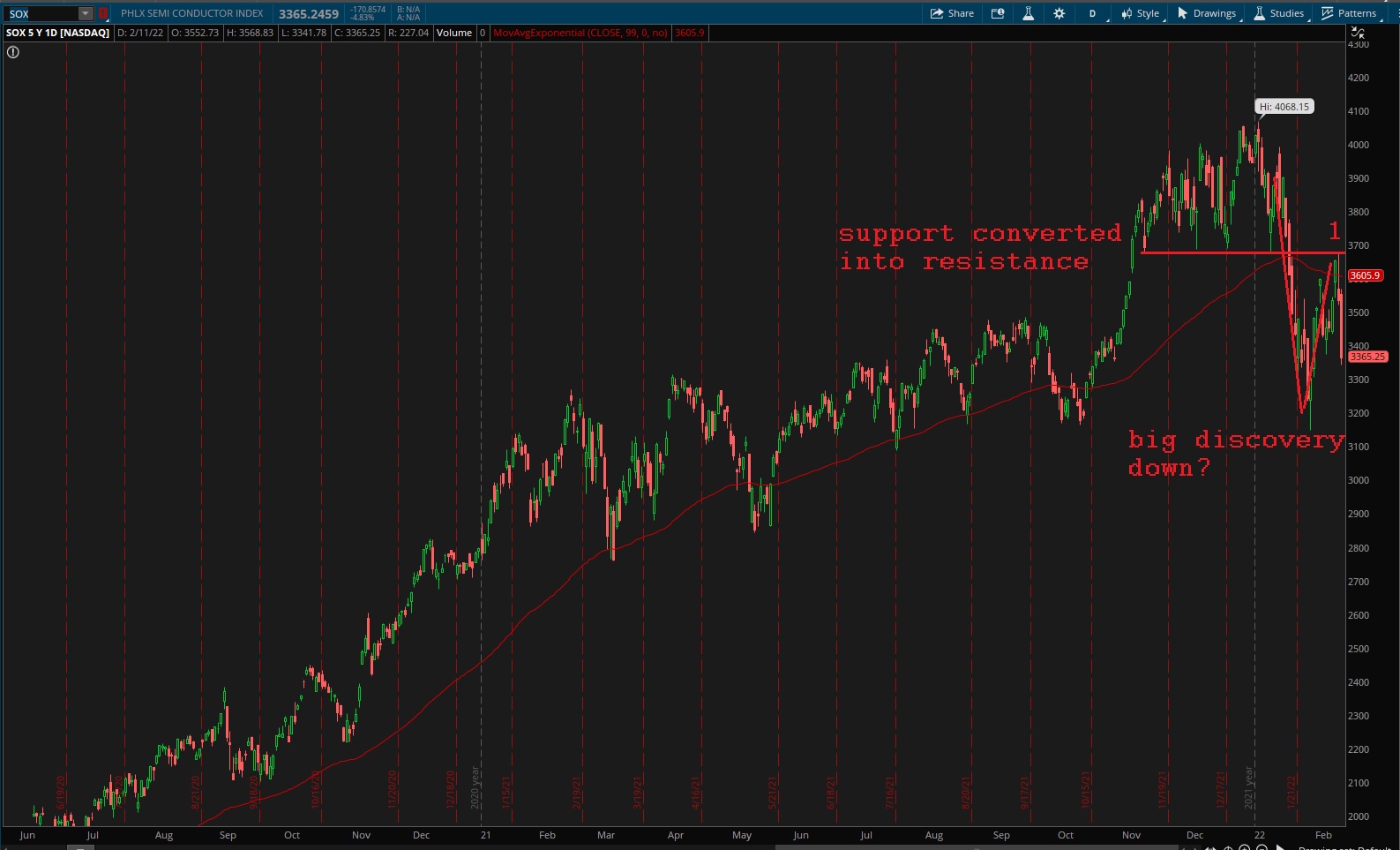 Ether appears to be in balance. Whether it can brush off the weak overall context remains to be seen. But this is definitely a healthier looking chart than the two above. 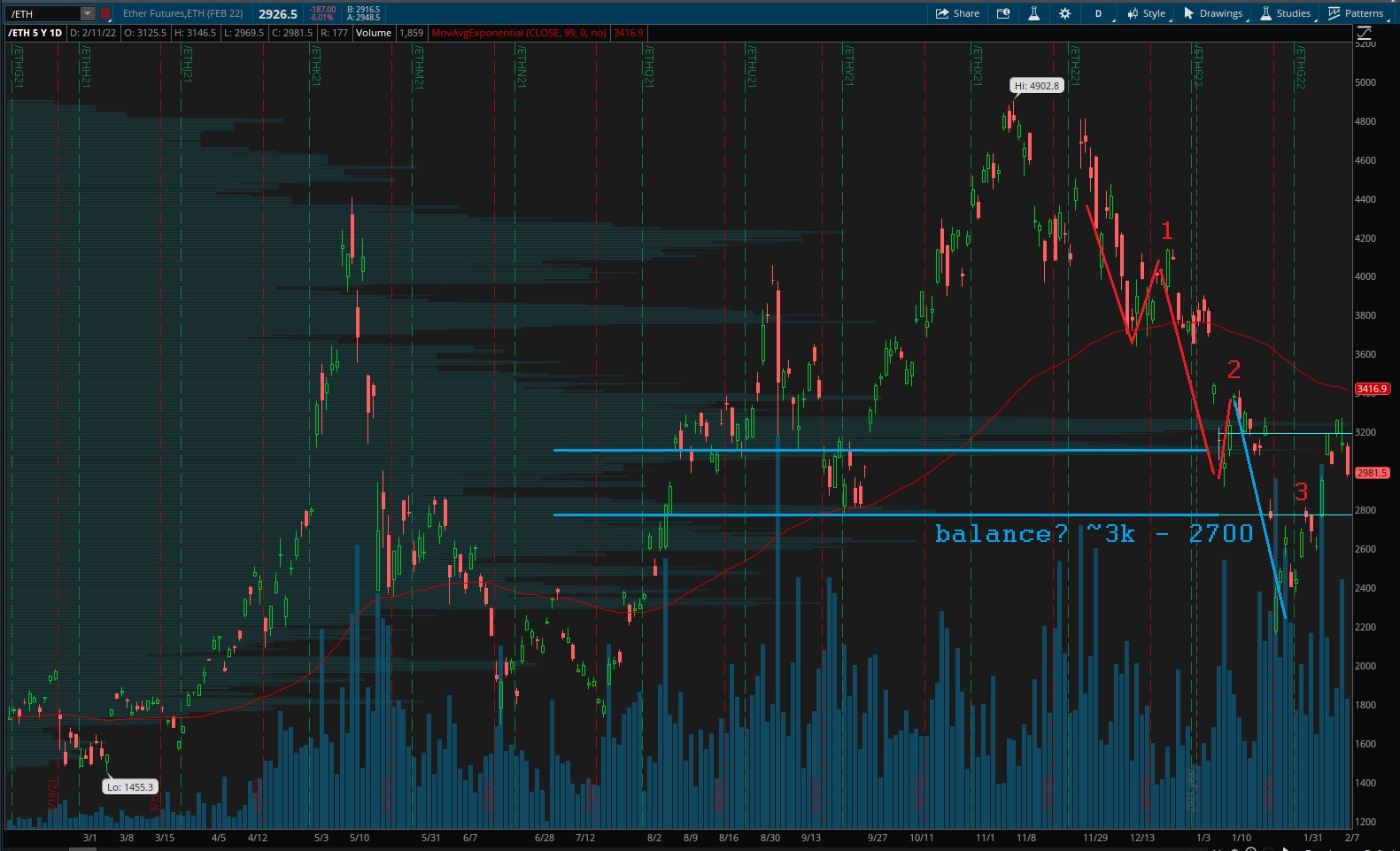 Neutral heading into next week. No bias. 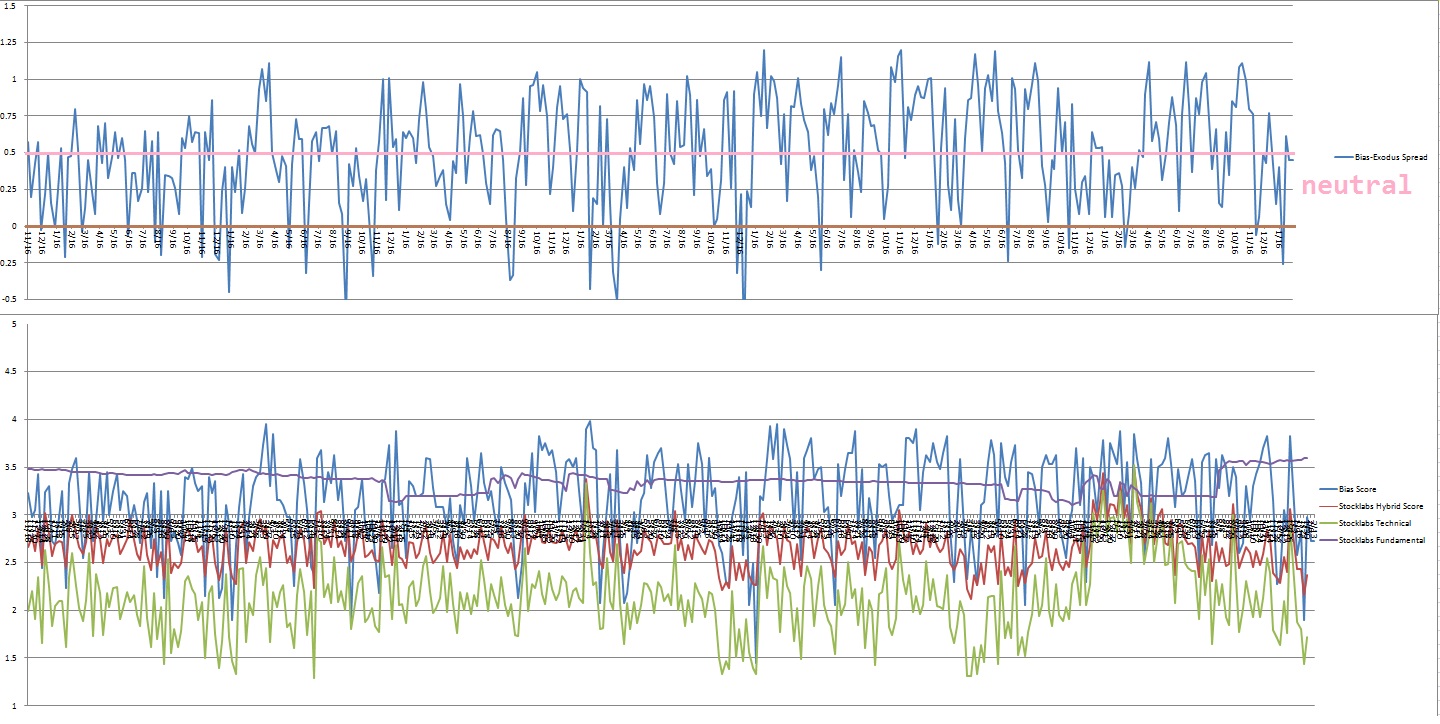 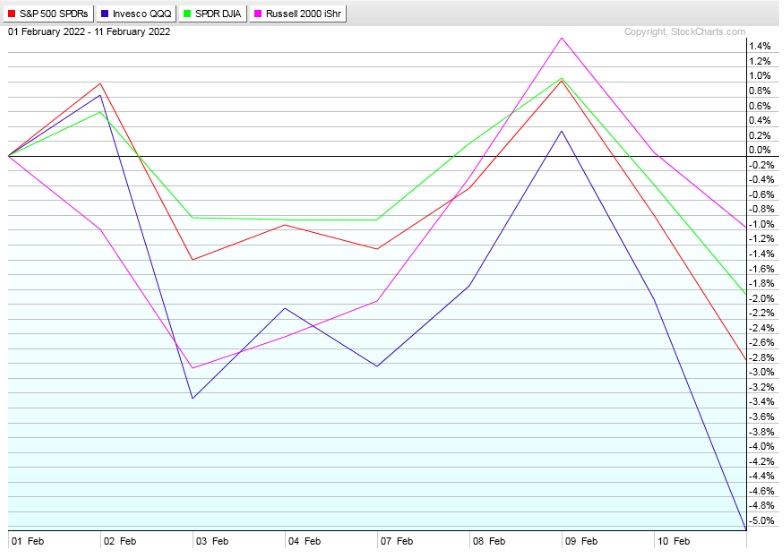 “You shouldn’t give circumstances the power to rouse anger, for they don’t care at all.” – Marcus Aurelius

Trade simple, stop getting worked up