I turn dials and fiddle with knobs to hone in on harmonic rotations
Joined Oct 26, 2011
3,992 Blog Posts
@vinnumbrr

Cruising into month-end a poor man

It’s feast and famine at the House of Raul (HoR). Has been since I left the mediocre existence of a corporate pleb earning 70,000 fiat american per annum. Now I speculate and toil. Speculate and toil. Toil and toil and speculate waiting for my number to be called.

My number has not been called in weeks resulting in risk management protocol going into place. I have reduced my trading size to one third normal position size until thing settle a bit.

Meanwhile I continue to live in a van between the toiling, eating tins of fish meat.

IndexModel is neutral into month-end. On the note of IndexModel, I’d like to offer props to whomever grabbed that twitter handle when I set it free. Good form.

I’ll be doing today and tomorrow what I always do when my hand goes cold. I clean. Clean and organize and clean some more. Scrub the walls and purge the garage. Do these things and think and prepare for the next big speculation.

And now the 339th edition of Strategy Session. Enjoy

Raul’s bias score 3.25, medium bull.  Choppy price action into month-end. Watch for a reaction to NVIDIA earnings Wednesday after-the-bell to put direction into the second half of the week.

Choppy through Tuesday then some late Tuesday selling. Pro gaps down Wednesday that were bid into resulting in an all-day rally. Rally carried into Thursday. Marked time Friday. 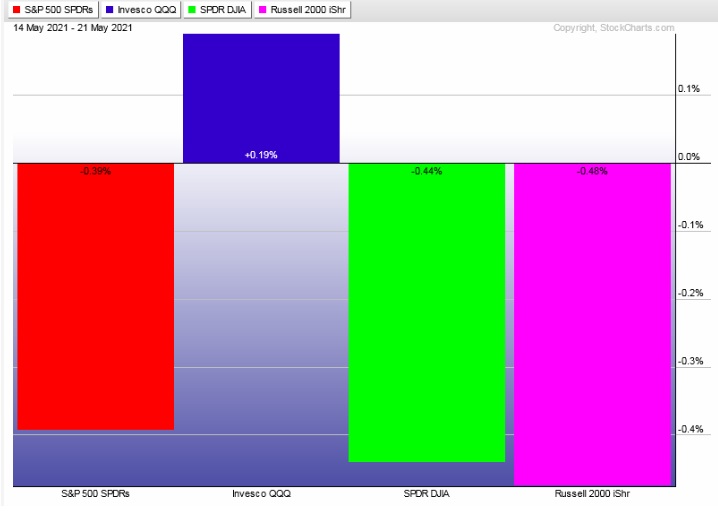 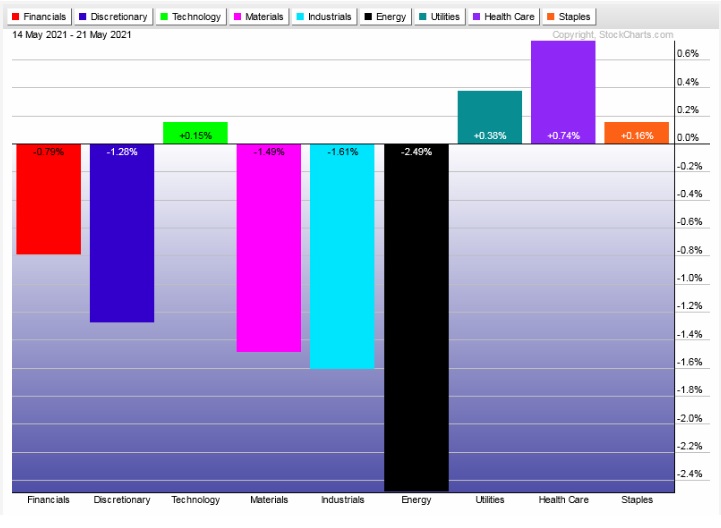 Money flows skewed heavily to the positive side of the ledger.

Keep your focus on consistently executing the signals generated by the Stocklabs mother algo. Do only this well and it will keep you on a path of consistent profitability. Keep it simple.

Choppy price action into month-end. Watch for a reaction to NVIDIA earnings Wednesday after-the-bell to put direction into the second half of the week. 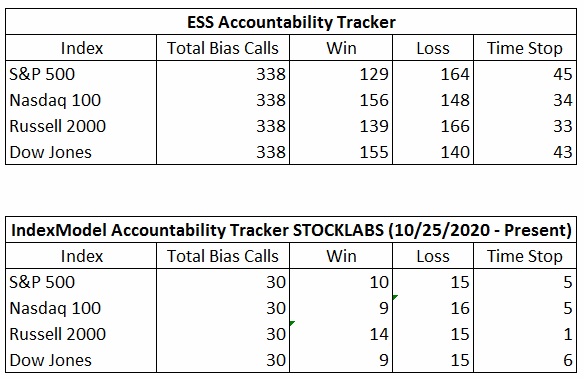 Balance at the highs is not bearish 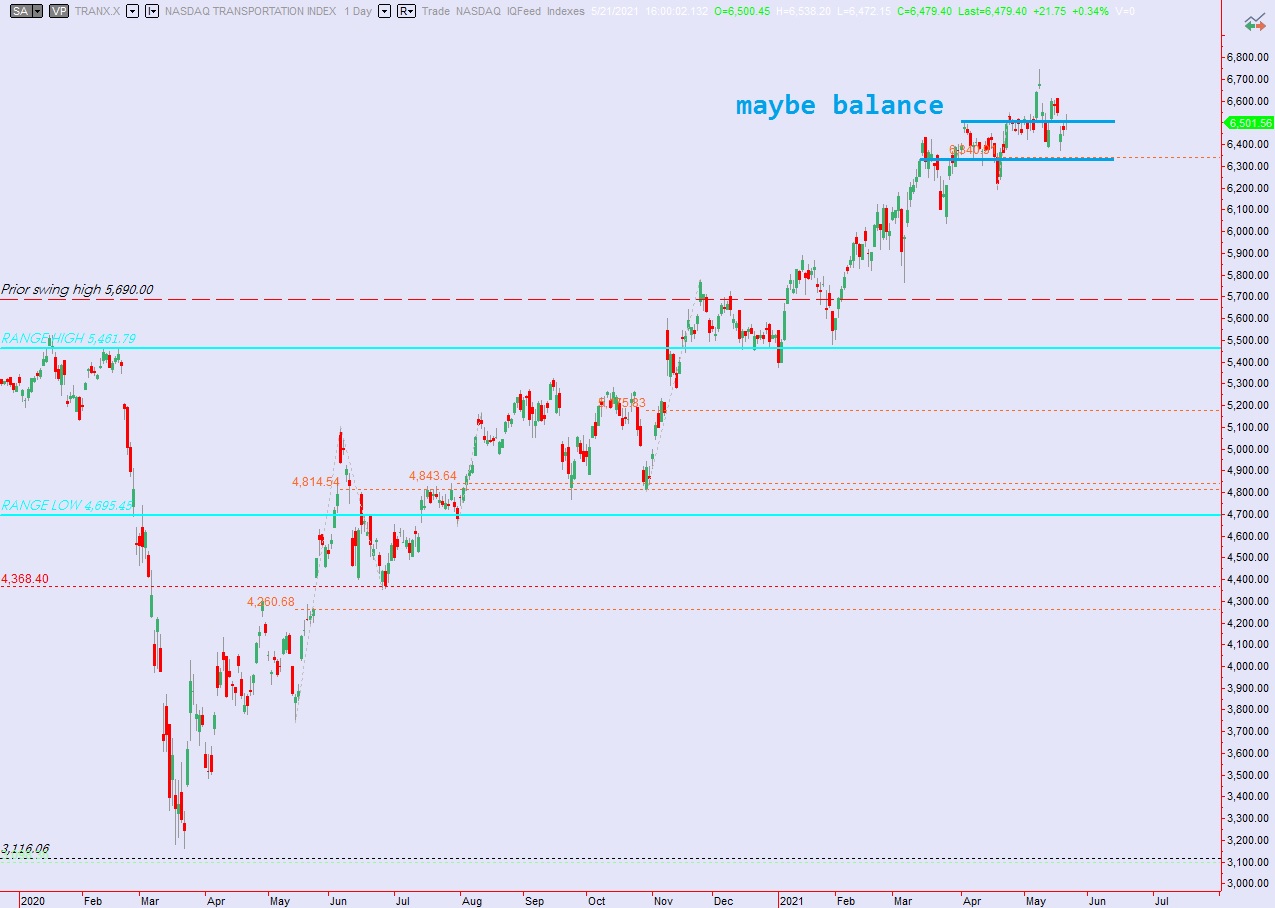 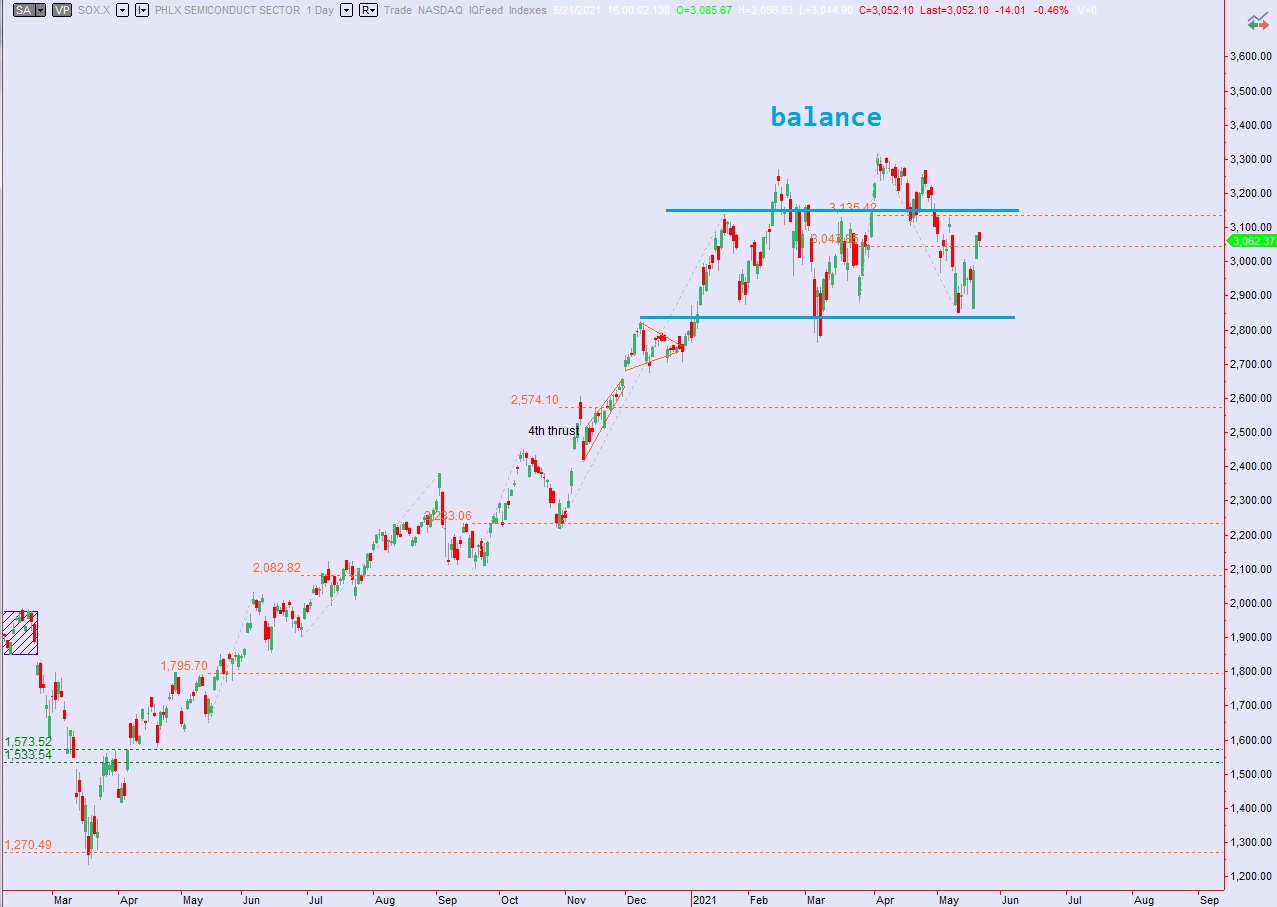 On Wednesday, May 12th Stocklabs flagged oversold on the 6- and 12-month algorithms. These bullish cycles run through end-of-day May 26th. Here is the performance of each major index so far: 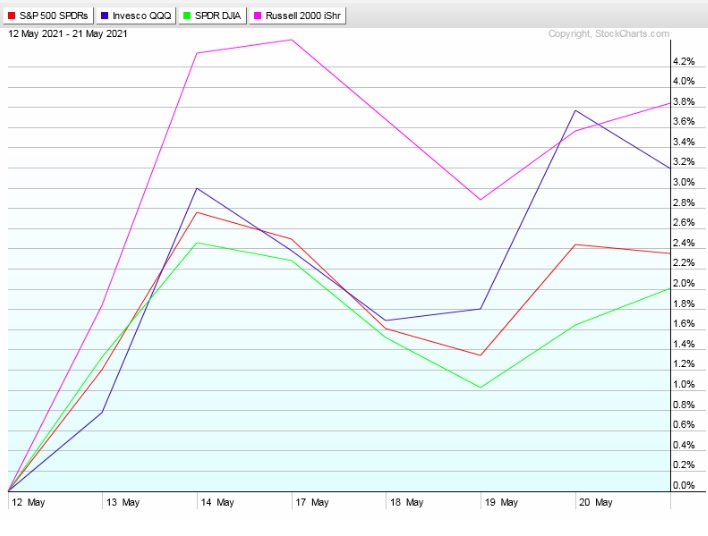 Bias model is neutral for a second consecutive week after being e(RCS) bullish two weeks back and RCS bearish three weeks prior.

We had a Bunker Buster twelve weeks ago. 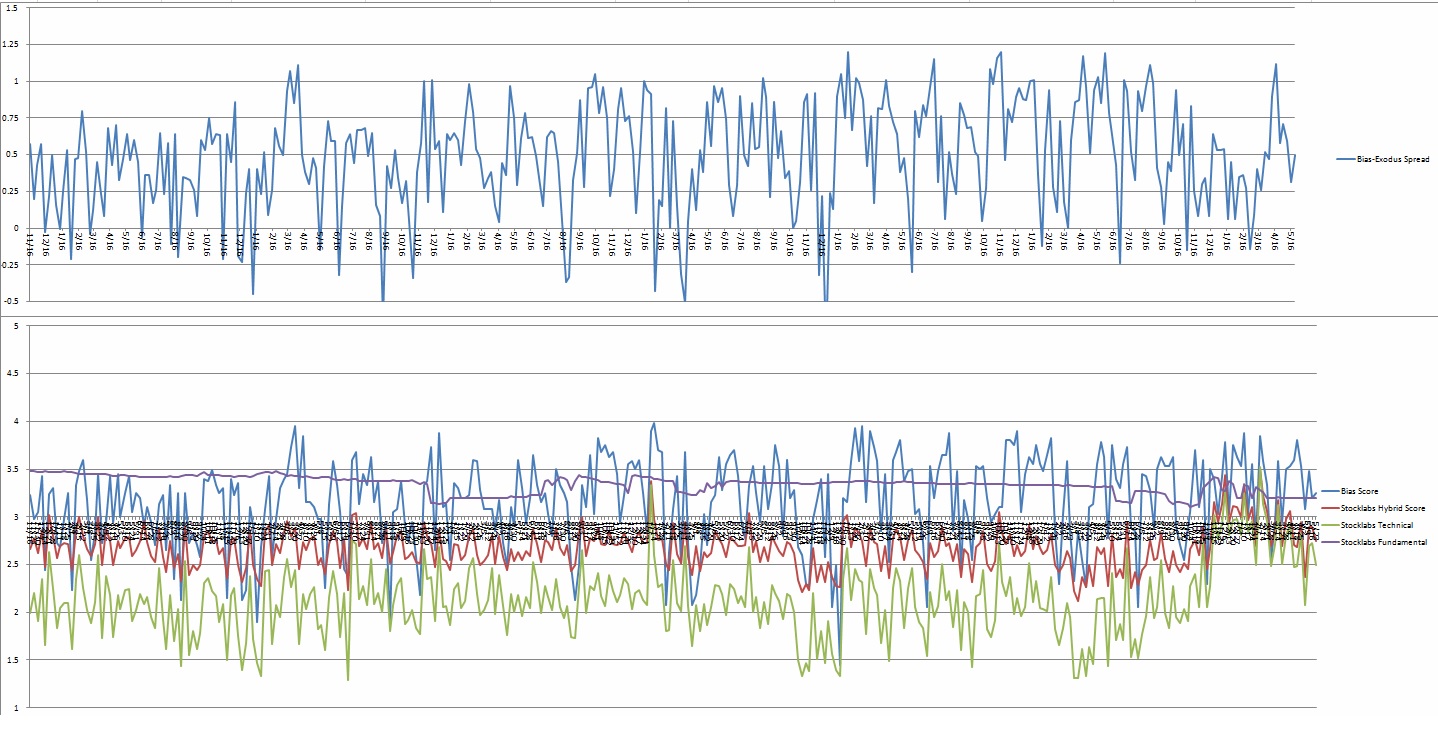 “I am a great believer in luck. The harder I work, the more of it I seem to have.” Coleman Cox

If you enjoy the content at iBankCoin, please follow us on Twitter
2021-05-23
Raul3
Share
Previous Bulls set to take victory lap // here is Friday NASDAQ trading plan
Next NASDAQ up a quick +100 into final week of May // here is Monday trading plan 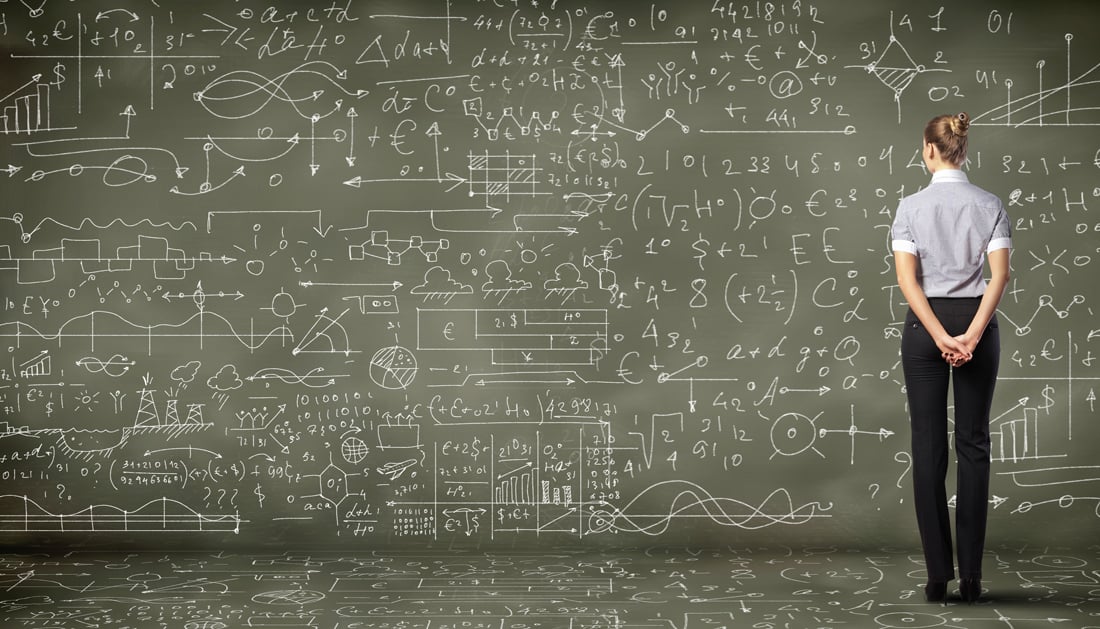 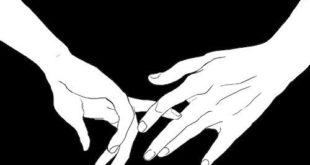 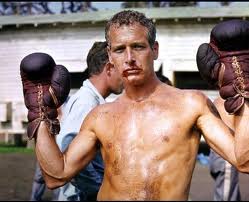