Say that 10 times as fast as you can.

I’ve been long $CMG common for a couple months now ($392 entry) as I believe it has bottomed and here’s why:

We will finally be getting info on how the Chiptopia promo helped or hurt Chipotle.  Here are the reward levels if you have been living in a cave and hate burritos and Chipotle. 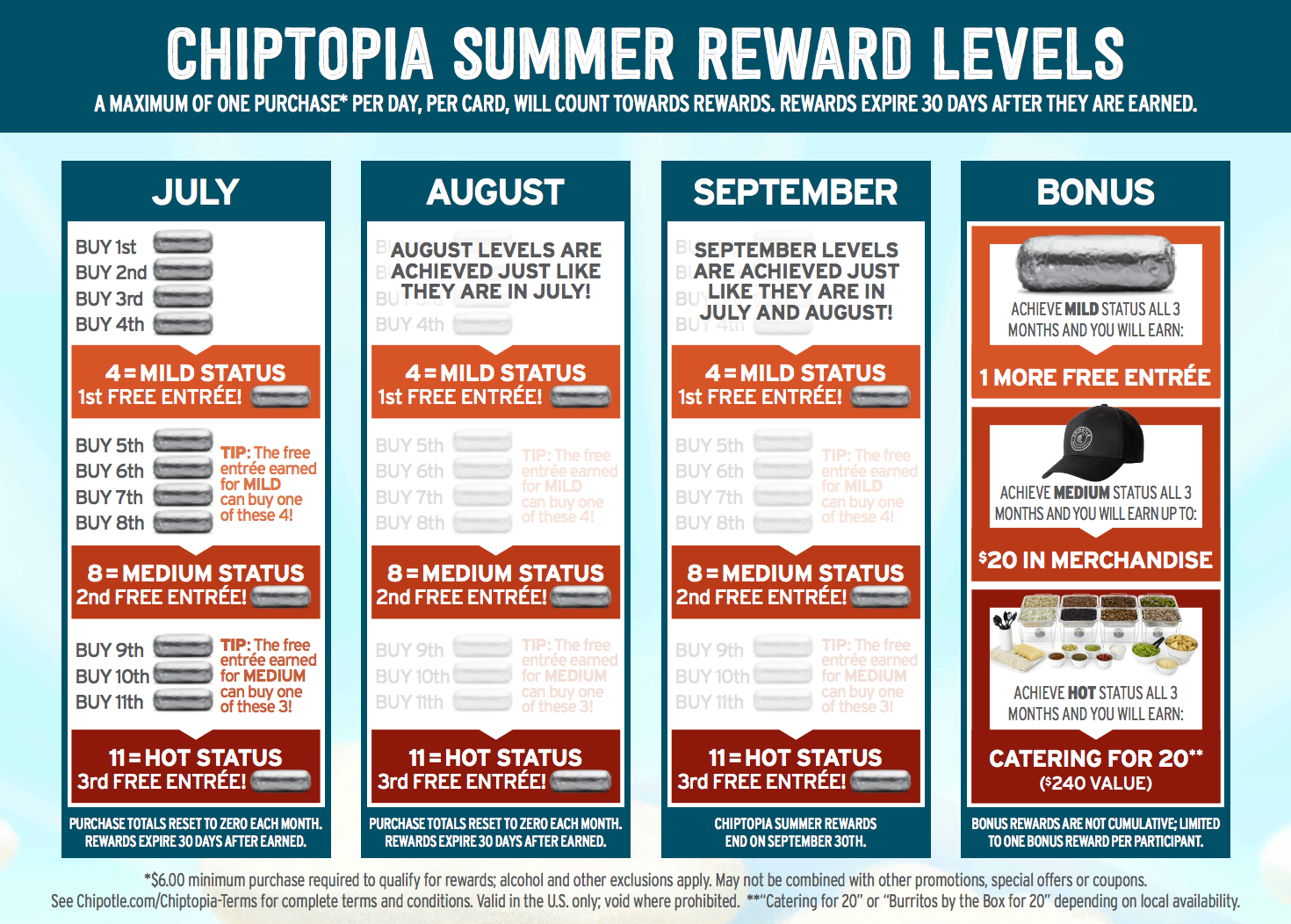 Now, my channel checks aren’t like real analyst’s channel checks (real analyst = oxymoron?).  I keep it local and I keep it intimate and I keep it qualitative.  This is how you can actually gain an advantage instead of falling into the herd mentality by watching CNBC all day.  I have a couple of friends who actually achieved Hot status in the Chiptopia promo.  They will of course be inviting me to their 20 person party.  I actually was only going for mild status but forgot to scan my card a couple times in the last month so I missed out on a free burrito.  How many people do you think tried to get the Chiptopia hot status but then missed by a visit or two?  I would imagine a lot.

Obviously, this Chiptopia promo was to lure customers back to the chain after the great E. coli scare of 2015 where a handful of people got sick.  Did anyone die?  I don’t know, maybe a couple.  People slowly die every day from eating the crap at McDonald’s so I’ll call it a wash.  I have never seen lines as long as I have at Chipotle since the Chiptopia promo started.  We actually started calling in our order at 9am so that we could go there and pick it up without having to wait 20-30 minutes in line.

The other channel check I did was somewhat intuitive, I thought at least, although not completely quantitative.  There is a coupon gift card website called Raise.com.  The site buys and sells hundreds of different gift cards.  So for instance, say you got a $100 gift card for Chipotle at Xmas and you know you will never use it, you can go on this site and sell it for a slight discount, say 2% or $98.  I’ve never sold one on there but the going rate discount is based off simple supply and demand.  If no one wants your shitty gift card to McDonald’s then you will have to sell it at a higher percentage off what you obtained it for.

Anyways, back 3 or 4 months ago when I was dipping into my $CMG position I went onto this site and noticed that there were tons of Chipotle gift cards going at 17% off.  That to me seemed like a huge discount, seeing as some gift cards get bought at only a 1% discount, but it was also right after the final E. Coli headline and right before Chiptopia started.  So I ended up picking up a couple of gift cards and used them throughout the Chiptopia promo.   I took a look back today at the Chipotle gift cards on Raise and there are only 25 available going for a 2% discount.  Which means 1 of 2 things to me: Demand is high and/or supply is low and the Chiptopia promo has actually worked and people have started coming back into the restaurants to enjoy their burritos.

A quick take at Chipotle’s chart shows it has been basing for the past 4 months.  It has traded in a range of 385 to 445 since June, most times going in straight lines up and straight lines down.  Taking a step back you can clearly see that the stock has started the bottoming process as it was previously shitcanned (pun intended) from $750 to $385 in less than a year.  It is also finally catching up to the 200DMA which would be a catalyst for some swing trader longs to hop in thinking the worst is over.  It came within a few dollars of tagging the 200DMA yesterday and it hasn’t been above it since October 20, 2015, almost a year ago.

Fundamentals aren’t great but aren’t terrible either, just depends on what you look at.  You can make a bear case by saying their same store sales are abysmal and food costs are rising and worker turnover and wages are high.  M Science (never heard of them) came out with a bearish note this morning shitting on them before earnings and they are down a swift 3.5%.  Nice timing asshats.

Margins always get hit with promos, but will the revenue gain from the Chiptopia promo help offset this and bring people back?  I feel somewhat comfortable holding shares (gambling) into earnings seeing as I already have a 8% gain.  From Nasdaq website:

Chipotle Mexican Grill, Inc. is expected to report earnings on 10/25/2016 after market close. The report will be for the fiscal Quarter ending Sep 2016. According to Zacks Investment Research, based on 17 analysts’ forecasts, the consensus EPS forecast for the quarter is $1.69.

The short float is near 19%.  So any beat on earnings could cause a huge short covering rally.  Let’s see how this one plays out and what investors focus on when they report.  Forward guidance is always key, if Chipotle says customers are coming back, that could be the fuel needed to ignite the next phase of the rally back to 500 and beyond.