Yields are ripping like a kite in a hurricane.

END_OF_DOCUMENT_TOKEN_TO_BE_REPLACED

A 6 Month View of The PPT’s Risk Appetite Index

If anyone tells you there is a liquidity issue in America, they are lying to you. 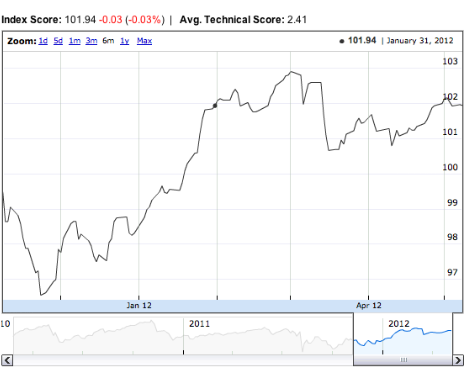 END_OF_DOCUMENT_TOKEN_TO_BE_REPLACED

Tue May 8, 2012 9:26am EST Comments Off on FLASH: EUROPEAN SOVEREIGN BOND YIELDS DECLINE, DESPITE RISK-OFF MODE

It’s worth noting, the bearish sentiment has not resulted in higher borrowing costs in Europe this morning. 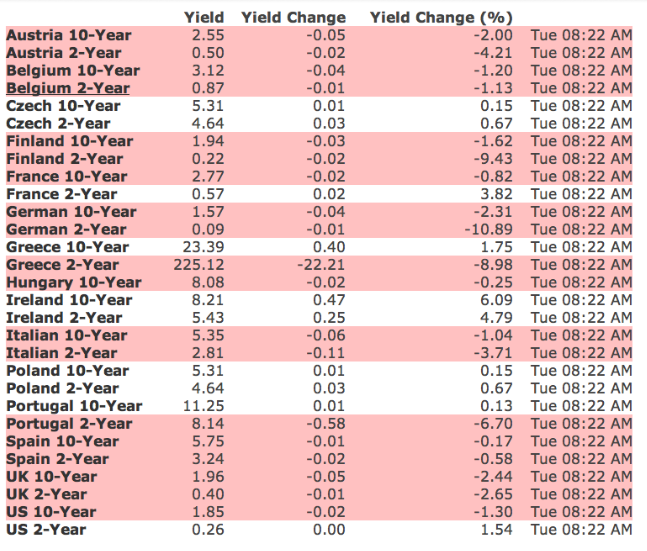 END_OF_DOCUMENT_TOKEN_TO_BE_REPLACED

U.S. Treasuries and the Dollar Find Strength After European Elections

Mon May 7, 2012 8:13am EST Comments Off on U.S. Treasuries and the Dollar Find Strength After European Elections

Seeking safety investors hide money away in the dollar and treasuries.

END_OF_DOCUMENT_TOKEN_TO_BE_REPLACED

A Summary of Treasury Yields

Yields are relaxed to unch in most cases….

END_OF_DOCUMENT_TOKEN_TO_BE_REPLACED

Wed May 2, 2012 8:59pm EST Comments Off on Ron Paul: Our Central Bankers are Intellectually Bankrupt

Paul explains, “The financial crisis has fully exposed the intellectual bankruptcy of the world’s central bankers.”

END_OF_DOCUMENT_TOKEN_TO_BE_REPLACED

The declines pushed the yield on the Spanish 10-year bond above 6 percent for first time in four days. The G-20, whose finance chiefs are meeting in Washington, cited “the situation in Europe” first among drags on the world economy, according to a draft statement obtained by Bloomberg News. French 10-year bond yields reached the highest in almost three months before the first round of presidential elections on April 22.

“Underlying sentiment is still pretty nervous and people are still pretty worried about the fiscal prospects in Spain,” said Nick Stamenkovic, a strategist in Edinburgh at RIA Capital Markets Ltd., a broker for banks. “With French elections starting, investors remain on the defensive toward risk markets. That will continue near term.”

French 10-year yields were little changed at 3.10 percent, after reaching 3.17 percent, the most since Jan. 25. The extra yield that investors get for holding the securities instead of German bunds widened to as much as 149 basis points, the most since January. French securities slipped this week as Citigroup Inc. said it expects the nation’s credit rating to be cut over the next two to three years….”

END_OF_DOCUMENT_TOKEN_TO_BE_REPLACED

Thu Apr 19, 2012 8:06am EST Comments Off on The Anticipated Spanish Bond Auction Was Well Subscribed

Spain managed to sell an enormous amount of bonds with slightly higher yields. The auction is being touted as a success with over subscription.

END_OF_DOCUMENT_TOKEN_TO_BE_REPLACED

What You Need to Know About Spain’s Bond Auction Tomorrow

But financial media and investors are going nuts over this auction—as opposed to a sale of short-term bond auction on Tuesday—because of the maturity of debt Spain is selling.

As we pointed out earlier today, Spain has issued far more short-term debt than long-term debt, pandering to the cheap cash banks have because of the European Central Bank’s two three-year long-term refinancing operations. In fact, the Bank of Spain even issued a memorandum earlier this year (via @trumanfactor) giving it the ability to issue debt in new denominations that might coincide more favorably with investor demand.

Thus, Spain’s ability to sell 2.5-year securities that mature before the LTRO expires will be vital to how well Spain can weather the storm around its banks. Poor results on the 2.5-year auction would signal that investors are already ignoring the positive impact of the LTRO, and that Spain’s sovereign debt situation is about to get a whole lot worse.

This year (green), Spain has been borrowing far more debt with shorter maturity than it normally has by this date.

NOT CONVINCED? READ: This Is The Number You Need To Be Watching In Spain >”

END_OF_DOCUMENT_TOKEN_TO_BE_REPLACED

“China remained the largest foreign U.S. creditor in February amid a rebound in the country’s foreign-currency reserves as Japan’s purchases of Treasuries picked up.

China’s holdings rose for a second straight month, increasing by 1.1 percent to $1.18 trillion, U.S. Treasury Department data released yesterday show. Those of Japan, America’s second-largest lender, climbed 1.2 percent to $1.096 trillion after the Asian nation intervened in months prior to stem the yen’s appreciation. Net foreign purchases of Treasuries rose $41.2 billion, or 0.8 percent, to a record $5.1 trillion, the data show…”

END_OF_DOCUMENT_TOKEN_TO_BE_REPLACED

“China’s new yuan loans were the most in a year and money-supply growth quickened after Premier Wen Jiabao moved to bolster the economy by cutting banks’ required reserves and helping smaller businesses get financing.

Local-currency-denominated loans were 1.01 trillion yuan ($160.1 billion) in March, the People’s Bank of China said today, exceeding all 28 estimates in a Bloomberg News survey. M2, the broadest measure of money supply, grew 13.4 percent from a year earlier. China’s foreign-exchange reserves, the world’s largest, rose to a record $3.31 trillion as of March 31 after dropping for the first time in more than a decade in the fourth quarter….”

END_OF_DOCUMENT_TOKEN_TO_BE_REPLACED

“The Bank of Japan (8301) refrained from expanding monetary easing to counter deflation, resisting pressure from lawmakers who five days ago rejected a nominee for the policy board.

The central bank kept the key rate between zero and 0.1 percent in Tokyo today. It left its 30 trillion yen ($368 billion) asset-purchase fund and 35 trillion yen credit-lending program unchanged, in line with the forecasts of 12 of 13 economists surveyed by Bloomberg News.

The yen strengthened and stocks pared gains after the unanimous decision, the first since the upper house of parliament blocked the appointment of BNP Paribas SA economist Ryutaro Kono after some lawmakers said he wouldn’t support stronger measures. The central bank may be preserving its ammunition for later in the month, when its revised price projections are likely to show a goal of 1 percent inflation is not in sight.

“The BOJ held off on additional easing to show it isn’t willing to be pushed around by politicians,” said Junko Nishioka, a Tokyo-based analyst at RBS Securities Japan Ltd. who has worked for the central bank. “The BOJ will be under pressure to ease policy at its next board meeting because of its close-to-zero percent inflation outlook.”

END_OF_DOCUMENT_TOKEN_TO_BE_REPLACED

“LONDON (Reuters) – A new batch of counterfeit cancer drug Avastin discovered in the United States was bought in Turkey and shipped through Britain by UK-based middlemen, officials said on Wednesday, revealing a shipment pattern very similar to an earlier episode.

The first discovery of fake supplies of the Roche drug shipped into the United States from the Middle East via Europe hit the headlines in February.

The repetition of the illegal trade highlights vulnerabilities in the global medicine supply chain, which leaves patients at risk of receiving ineffective or contaminated products.

Medicines and Healthcare products Regulatory Agency (MHRA) said it was looking into how the latest counterfeit batch entered Britain before being sold in the U.S. market.

“It’s an ongoing investigation,” said spokeswoman Jennifer Kyne. “We’re helping the FDA (Food and Drug Administration) with their investigation and doing all we can on our side.”

So far, the MHRA has established that British wholesaler Richard’s Pharma imported 120 packs of the medicine from a Turkish supplier, 38 of which were exported direct to the United States.

The remainder were sold to another British firm, River East Supplies, which also exported them to the U.S. market. River East was previously identified by regulators as one of the parties involved in the earlier fake Avastin incident.

No-one was immediately available to comment at either Richard’s Pharma or River East, which are based respectively in Warwick and Nottingham, central England.

The MHRA’s Kyne said there was no evidence to suggest that any of the counterfeit product had reached patients in Britain….”

END_OF_DOCUMENT_TOKEN_TO_BE_REPLACED

“Spanish notes led losses in European sovereign debt markets after demand fell and borrowing costs rose in the nation’s first auctions since announcing that public debt will surge to a record this year.

The declines pushed the yield on Spanish five-year notes to the highest in 12 weeks, while similar-maturity Italian debt slid and Greek 10-year bonds fell. Benchmark German bunds erased an intraday drop as the nation sold securities due in February 2017. The European Central Bank will leave its main refinancing rate at a record low 1 percent today, according to all 57 economists in a Bloomberg survey.

“The auction reflects market disappointment with recent fiscal policy” in Spain, Luca Jellinek, head of European interest-rate strategy at Credit Agricole Corporate & Investment Bank in London, wrote in an e-mailed report. “The immediate post-auction price action is bearish. This kind of price action in the periphery is clearly supportive for German bunds.”

END_OF_DOCUMENT_TOKEN_TO_BE_REPLACED

Long ETFs and ETNs for the Short Treasury Trade

Both Julian Robertson, in 2009, and Bill Gross, in 2011, backtracked for being early on macro moves in U.S. Treasuries. But the latest shift for 10-Year Treasury yields above 2.3% even has technicians declaring a break out.

Last August, long-term Treasury exchange-traded funds soared amid concerns around the debt ceiling debates and Eurozone worries. Even those late to the trade still had months of gains.

If you believe the past is prologue, the opposite trade may be here. As early as January, the short Treasury trade has been on and the drumbeat has only gotten louder.

Exchange-traded funds and notes offer several ways to take a view on a further backup in yields.

While there are dozens of exchange-traded products and options plays for creative traders and investors, here are a few tools with the creativity baked in.