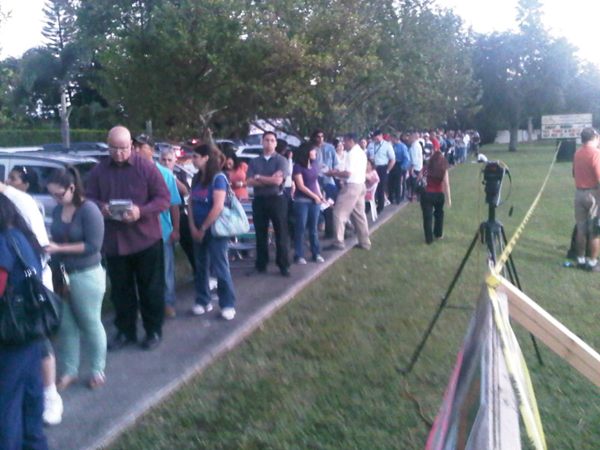 in West Kendall, Florida, a suburb of Miami

END_OF_DOCUMENT_TOKEN_TO_BE_REPLACED

Another one with poor sourcing…

END_OF_DOCUMENT_TOKEN_TO_BE_REPLACED

Watch: Obama Calls Woman Who Doesn’t Know Who He Is

END_OF_DOCUMENT_TOKEN_TO_BE_REPLACED

WASHINGTON (AP) — Preliminary results of an exit poll conducted for The Associated Press show that the presidential election hinges once again on the economy.

The survey of voters as they leave polling places Tuesday shows 6 in 10 voters say the economy is the top issue facing the nation, with unemployment and rising prices hitting voters hard.

About 4 in 10 say they think the nation’s economy is on the mend, but more say that things are getting worse or are bad and stagnating.

About half of voters say the previous president, George W. Bush, shoulders more of the blame for economic challenges than President Barack Obama.

Just a quarter of those surveyed in the exit poll say they are better off than four years ago.

END_OF_DOCUMENT_TOKEN_TO_BE_REPLACED

I don’t see any sourcing in the article, but its worth a read so that you know what the Wednesday morning talking points will be…

Republican Ohio Secretary of State Jon Husted has asked voting machine giant ES&S to install last-minute, unverified, custom firmware updates on the state’s voting machines. This is highly irregular, and the details of it are shrouded in secrecy and silence — the few, terse statements from Husted’s office on the matter have been self-contradictory and unhelpful. On Salon, Brad Friedman tries to untangle the mess, and concludes that it’s impossible to say what the new software in Ohio’s voting machines actually does, nor why unaudited, unapproved software should be added to voting machines in a critical swing-state at the last minute, but that it’s highly suspicious and possibly illegal.

END_OF_DOCUMENT_TOKEN_TO_BE_REPLACED

“The 2012 presidential election could be effectively settled shortly after 8 p.m. Eastern Standard Time, when all polls will have closed in three of the biggest battleground states: Florida, Virginiaand Ohio.

Quick projections of a sweep of these competitive states by either President Barack Obama or Republican Mitt Romneyprobably would mean that candidate will win the White House. If there’s a split decision or if some of these races remain unsettled for hours, the election’s outcome could stretch into tomorrow. Challenges to ballot tallies — like in Florida in 2000 — could delay the call for days or weeks.”

END_OF_DOCUMENT_TOKEN_TO_BE_REPLACED

G20 Makes a Push for Regulation Over Shadow Banks by 2013

MEXICO CITY/LONDON, Nov 5 (Reuters) – International watchdogs, working to tighten-up global regulation after the financial crisis, are moving ahead with plans to extend their reach to “shadow banks” such as money-market funds that handle trillions of dollars in short-term investments.

Policymakers have already tightened regulation for mainstream banks but are keen to stop higher-risk activities shifting to less supervised areas such as off-balance sheet units, hedge funds and money-market funds, which contributed to the crisis.

This is a clear signal there will be no let up for the financial sector despite warnings that introducing too many rules could hinder global economic recovery.”

END_OF_DOCUMENT_TOKEN_TO_BE_REPLACED

Tue Nov 6, 2012 8:10am EST Comments Off on $GS Says to Be Prepared for Recounts and Voting Issues to Delay the Outcome

There are two foreseeable risks: a recount in a key state, or a delayed result due to absentee ballots or other voting issues. Colorado, Florida, and Pennsylvania conduct automatic recounts if the results are within 0.5 percentage points; Ohio’s threshold is 0.25%. The average of recent polls in Colorado shows the President with a 0.6pp lead, just outside this threshold….”

END_OF_DOCUMENT_TOKEN_TO_BE_REPLACED

Can Romney get the electoral  vote ?

END_OF_DOCUMENT_TOKEN_TO_BE_REPLACED

With the exception to exit polls I do not pay attention to polls…at any rate, we have a dead heat thus far:

END_OF_DOCUMENT_TOKEN_TO_BE_REPLACED

“European and Asian leaders will this week discuss a stalled trade agenda between the world’s fastest and slowest-growing regions, as the debt crisis undermines expansion of commercial ties.

Europe’s economic woes may exacerbate protectionist tendencies that make it harder to expand trade with its biggest commerce partner at a time when the U.S. and Australia are forging new agreements, according to Fredrik Erixon, head of the European Centre for International Political Economy in Brussels. Apart from a trade deal with South Korea, the 27-member European Union has seen talks lag with China, Japan, India and Southeast Asian countries since 2007.”

END_OF_DOCUMENT_TOKEN_TO_BE_REPLACED

A Word From Dennis Kucinich

END_OF_DOCUMENT_TOKEN_TO_BE_REPLACED

“It is that time in the presidential cycle that gets everyone emotional and concerned with the future outlook of the United States. While everyone has their opinion on whom they think is best for America, I promised myself a long time ago to keep my thoughts to myself for two key reasons. ONE: only 50% of Americans will agree with me J, and TWO: I am Canadian so I do not experience what Americans go through on a daily basis.

My thinking is if Obama wins then”

END_OF_DOCUMENT_TOKEN_TO_BE_REPLACED 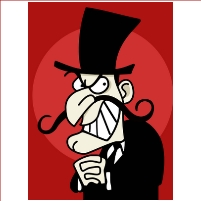 END_OF_DOCUMENT_TOKEN_TO_BE_REPLACED

What you are about to see goes against what is imprinted in your brain.

If you do the research this meme arose over the past 60 years and has wrongfully accused the wrong side for being big government spenders ever since….

Disseminating Truth From Lies in the Heat of a Campaign

Sat Nov 3, 2012 10:40am EST Comments Off on Disseminating Truth From Lies in the Heat of a Campaign

“WASHINGTON (AP) — And now, to conclude, a few parting misstatements.

Come Wednesday, or sometime later if the election result is still in the balance, only one man will be left standing and the loser’s inventory of misleading claims, out-of-context assertions and warped-reality advertising will fade into some inglorious corner of history. But we’re not quite done with them yet.

In campaign speeches that serve as closing arguments, President Barack Obama and Republican rival Mitt Romney are still at it. Romney is still misrepresenting the impact of Obama’s health care law on your wallet. Obama is still masking the sticker shock of his plan to tax the rich.

Call it a perfect storm of Frankenfacts. Here’s a sampling of the claims coming from the stump and the airwaves in the campaign’s 11th-hour tempest:”

END_OF_DOCUMENT_TOKEN_TO_BE_REPLACED

This administration is an embarrassment on foreign policy and incompetent at best on the economy – though a more careful analysis shows what can only be a perverse and willful attempt to destroy our prosperity. Back in January 2008, Barack Obama told the editorial board of the San Francisco Chronicle that under his cap-and-trade plan, “If somebody wants to build a coal-fired power plant, they can. It’s just that it will bankrupt them.” He added, “Under my plan … electricity rates would necessarily skyrocket.” It was also in 2008 that Mr. Obama’s future Energy Secretary, Steven Chu, famously said it would be necessary to “figure out how to boost the price of gasoline to the levels in Europe” – $9 a gallon.

Yet the president now claims he’s in favor of oil development and pipelines, taking credit for increased oil production on private lands where he’s powerless to block it, after he halted the Keystone XL Pipeline and oversaw a 50 percent reduction in oil leases on public lands.

These behaviors go far beyond “spin.” They amount to a pack of lies. To return to office a narcissistic amateur who seeks to ride this nation’s economy and international esteem to oblivion, like Slim Pickens riding the nuclear bomb to its target at the end of the movie “Dr. Strangelove,” would be disastrous.