WARTIME FLASH: AMERICAN TROOPS NOW ON THE GROUND IN LIBYA

Despite repeated assurances from President Obama and military leaders that the U.S. would not send uniformed military personnel into Libya, four U.S. service members arrived on the ground in Tripoli over the weekend.

According to Pentagon spokesman Capt. John Kirby, the four unidentified troops are there working under the State Department’s chief of mission to assist in rebuilding the U.S. Embassy.

Kirby noted the embassy in Tripoli was badly damaged during the conflict between Muammar Qaddafi’s forces and the rebels.

END_OF_DOCUMENT_TOKEN_TO_BE_REPLACED

Asian stocks slid on Monday and the euro sank to a 10-year low against the yen, after the resignation of a top German European Central Bank board member cast further doubt on the region’s ability to tackle its worsening sovereign debt crisis.

Oil and copper prices fell and the dollar gained broadly as worries about the euro zone’s woes combined with fears about the flagging world growth to ensure no let-up in the gloom that has gripped global markets for much of the past six weeks.

“People are quite nervous about Greece and other countries in the European area, so that is why investors are escaping to the dollar,” said Tetsu Emori, a fund manager at Tokyo-based Astmax Co Ltd. “It’s risk aversion.”

Juergen Stark’s resignation from the ECB’s board underscored the internal divisions over its bond-buying program — one of the central bank’s main weapons in fighting the debt crisis by forcing down yields of country’s under pressure from the bond markets.

“For the rest of the week, developments in euro zone debt problems and movements in the euro will likely set the direction of the market,” said Yutaka Miura, a senior technical analyst at Mizuho Securities in Tokyo.

Data from fund tracker Lipper, a Thomson Reuters service, showed that a brief flirtation with stocks at the end of August has waned, with less than a net $600 million flowing into U.S. equity funds in the week ended September 7, compared with a net inflow of $6.3 billion in the previous week.

MSCI’s All-Country World index .MIWD00000PUS is now 19 percent below its 2011 high set in May, not far from the 20 percent decline that is the rule-of-thumb definition of a bear market.

The fund flow picture for emerging Asian equity markets was mixed. Citigroup analysts said in a note that China and Indonesia had seen modest net inflows for the week to September 7. The biggest outflows were from regional funds and the cyclical markets of South Korea and Taiwan.

A growing number of policymakers, as well as market economists, are convinced it is only a matter of time before Greece, which keeps falling behind on its fiscal targets after two EU/IMF bailouts, will have to default.

“The outlook for Greece is almost completely unknown. Support for the country appears to be shaking. The market is starting to think the worst could happen,” said Katsunori Kitakura, chief dealer at Chuo Mitsui Trust and Banking.

Meanwhile, the dollar index .DXY, which tracks the greenback against a basket of majorcurrencies, rose around 0.4 percent to near a one-month high set on Friday.

Both commodities are sensitive to expectations for global growth, and hence industrial demand.

Currencies of major commodity producers were, in turn, under pressure, with the Australian dollar falling more than 1 percent to a three week low around $1.0363.

Gold, which has been striking a succession of records due to its traditional appeal as a safe haven at times of market volatility, fell 0.5 percent to around $1,848 an ounce as a stronger dollar made it more expensive for holders of other currencies.

END_OF_DOCUMENT_TOKEN_TO_BE_REPLACED

Three idiot passengers holed up in a bathroom caused a panic that resulted in fighter jets scrambling to monitor the flight. All is well now, as the plane landed safely at JFK.

END_OF_DOCUMENT_TOKEN_TO_BE_REPLACED

Three passengers caused a scare on a flight from Los Angeles to John F. Kennedy airport when they refused to come out of a bathroom.

The three passengers on American Airlines Flight 34 went into a bathroom and were “not compliant.”

The passengers are reportedly now back in their seats.

The flight is set to arrive at JFK at 4:25 p.m. Investigators are waiting for the plane to land.

New York City has been under heightened alert since intelligence was picked up overseas indicating a possible plot to coincide with the 10th anniversary of 9/11.

END_OF_DOCUMENT_TOKEN_TO_BE_REPLACED 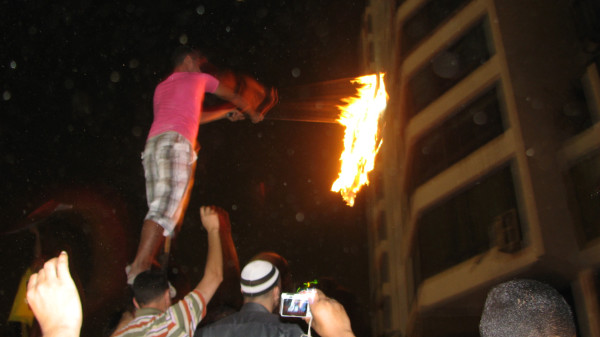 Update: Egypt in state of alert, not emergency, after attack on Israel embassy in Cairo – Reuters

END_OF_DOCUMENT_TOKEN_TO_BE_REPLACED

D&T Shanghai hasn’t provided any documents to the SEC, which issued subpoenas to the firm on May 27, the agency said in a statement today, citing a filing in U.S. District Court in Washington. As a result, the SEC has been unable to access “critical” information in its probe of possible fraud at Longtop, the statement said.

Longtop, based in Hong Kong, said in May that D&T Shanghai quit because of errors in the company’s financial records. The SEC also began an investigation. In July, the SEC and Public Company Accounting Oversight Board met with counterparts in China to discuss cross-border oversight.

Today’s action “essentially is a battle between the SEC and Chinese regulators forcing D&T Shanghai to assert Chinese law as an explanation for why it cannot produce records,” Jacob Frenkel, a former SEC lawyer now with Shulman Rogers Gandal Pordy & Ecker PA in Potomac, Maryland, said in an interview. “Auditing firms know that the SEC has the right to subpoena and review and consider audit work papers. This is about bringing to a head the dispute over access to information relating to audits of Chinese companies.”

D&T Shanghai resigned as Longtop’s auditor after discovering numerous improprieties during the year ended March 31, 2011, according to the SEC. The SEC issued a subpoena for documents it said may contain basic information necessary to determine whether there was a fraud, who was behind it and how it was conducted, according to the court filing.

“Compliance with an SEC subpoena is not an option, it is a legal obligation,” Robert Khuzami, head of the SEC’s enforcement division, said in a statement today. “The ability of the SEC to conduct swift and thorough investigations requires that subpoena recipients promptly comply with that legal obligation.”

Longtop shares started trading over the counter in August. They hadn’t changed hands since May, when the New York Stock Exchange imposed a halt. The SEC is seeking a court order directing D&T Shanghai to show cause why the court shouldn’t enter an order requiring the firm to produce documents responsive to the subpoena, according to the court filing.

END_OF_DOCUMENT_TOKEN_TO_BE_REPLACED

Facebook’s revenue doubled to $1.6 billion in 2011’s first half, a source with knowledge of its financials told Reuters, underscoring its appeal to advertisers while it grapples with intensifying competition from the likes of Google Inc.

Net income in the first half of 2011 came to almost $500 million, according to the source, who wished to remain anonymous because privately-held Facebook does not disclose its results.

Facebook’s stronger results come as investors have pushed its valuation to roughly $80 billion in private markets, with many industry observers expecting the world’s No. 1 Internet social network to go public in 2012.

Its growing popularity among its advertisers and 750 million users has pressured entrenched Web companies such as Yahoo Inc, which ousted its chief executive Carol Bartz on Tuesday.

Search leader Google Inc launched Google+, a rival social network in June that attracted more than 10 million users in its first two weeks. Google is trying to increase the appeal of its social network by offering games such as Zynga Poker and Rovio’s Angry Birds.

Some venture capitalists and industry experts see early signs that Google+ is headed down the right path in taking a bite out of Facebook.

FROM DORM ROOM TO MARKETS

Facebook earned $355 million in net income in the first nine months of 2010 on revenue of $1.2 billion, according to documents that Goldman Sachs provided to clients during a share offering this year.

The source did not provide figures for a direct comparison for the first half 2011 figures.

Created by CEO Mark Zuckerberg in a Harvard dorm room in 2004, the company is expected to introduce new features this month such as music services from Spotify and Rhapsody, according to people familiar with the plans.

Facebook has become one of the Web’s most visited destinations by people who spend hours on the site every month sharing photos and videos, and conversing with friends.

Facebook accounted for nearly one third of all Internet display advertisement impressions in the United States in June, more than the combined total of Yahoo, Microsoft Corp, Google and AOL Inc, according to analytics firm comScore.

It was not clear what portion of Facebook’s $1.6 billion in revenue in the first half of the year came from advertising sales. Facebook also gets a 30 percent cut of sales of virtual goods, such as digital cars or animals, that enhance the experience in social games such as Zynga’s FarmVille.

In January, Facebook said it had raised $1.5 billion from investors including Goldman Sachs and Digital Sky Technologies, as well as through a private offering to overseas investors conducted by Goldman Sachs, at a valuation of roughly $50 billion.

END_OF_DOCUMENT_TOKEN_TO_BE_REPLACED

Flash: Carol Bartz Out at YHOO

It’s being reported that CEO of Yahoo, Carol Bartz, is stepping down.

END_OF_DOCUMENT_TOKEN_TO_BE_REPLACED

MIAMI (AP) — Hurricane Katia has roared to a monstrous Category 4 storm as it moves across the Atlantic Ocean.

On Monday night, Katia’s maximum sustained winds had increased to 135 mph (215 kph). Some strength fluctuations are expected before the storm slowly weakens.

Hurricane specialist Todd Kimberlain says it’s looking less likely that Katia will hit land but that wind from the storm could still affect the U.S. East Coast as it moves north. Forecast maps show it veering to the northeast, away from the U.S. in the coming week.

END_OF_DOCUMENT_TOKEN_TO_BE_REPLACED

Asian stocks opened down between 1-2%. Even though US markets are closed tomorrow, futures are open for trade.
S&P futs are 8 points below fair value.