Ina, once regarded as best in the business, has been ousted post CIO blow up.

Zames has long been discussed as possible heir to Dimon.

Here is an open letter, written by Zames, to Geithner in 2011–regarding the debt ceiling.

END_OF_DOCUMENT_TOKEN_TO_BE_REPLACED

Chesapeake Energy on conference call says it does not know exactly how much it has drawn on its $4 bln revolver before it received the $3 bln loan, but says it was probably ‘north of $3 bln’

Chesapeake Energy on conference call says Eagle Ford Production deal will be delayed or cancelled; Was going to generate $1 bln

Chesapeake Energy on conference call says it still expects to sell assets in 2013 and be cash flow positive in 2014; says remaining assets will worth between $50-60 bln; says asset values will be ‘significantly higher when gas prices improve’

END_OF_DOCUMENT_TOKEN_TO_BE_REPLACED

Mon May 14, 2012 9:18am EST Comments Off on A Full Summary of European Sovereign Bond Yields 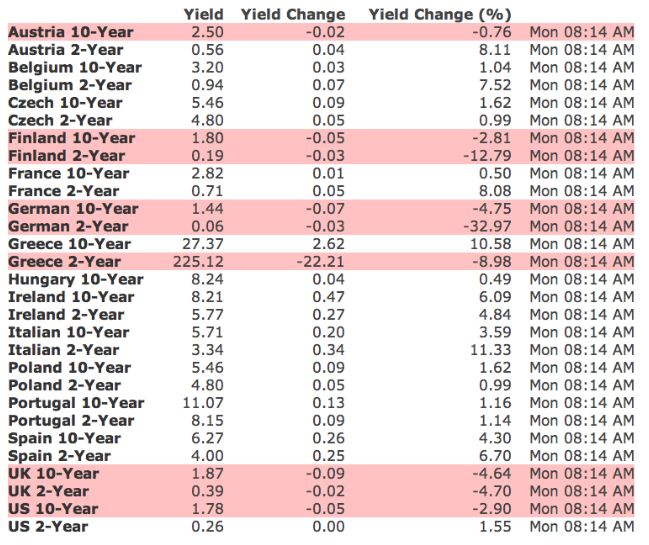 END_OF_DOCUMENT_TOKEN_TO_BE_REPLACED

According to the WSJ, Icahn is expected to announce a significant position in CHK Monday morning.

END_OF_DOCUMENT_TOKEN_TO_BE_REPLACED

FLASH: CEO OF YAHOO, SCOTT THOMPSON, HAS BEEN FIRED

I am sure he will be omitting that from his resume.

END_OF_DOCUMENT_TOKEN_TO_BE_REPLACED

China’s central bank cut the amount of cash that banks must hold as reserves on Saturday, freeing an estimated 400 billion yuan ($63.5 billion) for lending to head-off the risk of a sudden slowdown in the world’s second-largest economy.

The People’s Bank of China delivered a 50 basis point cut in banks’ reserve requirement ratio (RRR), effective from May 18, the third cut in six months and one that investors had called for after data on Friday showed the economy weakening, not recovering, from its slowest quarter of growth in three years.

Industrial production weakened sharply in April and fixed asset investment – a key growth driver – hit its lowest level in nearly a decade, surprising many economists who thought Q1’s 8.1 percent annual rate of growth marked the bottom of a downswing and were expecting signs of recovery in Q2 data.

“The central bank should have cut RRR after Q1 data. It has missed the best timing,” Dong Xian’an, chief economist at Peking First Advisory in Beijing, told Reuters.

The domestic production and investment data had followed hot on the heels of weaker than forecast trade data, with the annual rate of export growth around half the level expected and growth in imports grinding to a halt on a nominal basis in April, underlining China’s vulnerability to weakness in global demand for goods produced in the country’s vast factory sector.

Bank lending in April was also sharply below forecast at 681.8 billion yuan ($108.04 billion), missing the 800 billion consensus call and raising doubts about whether Beijing had policy settings slack enough to keep the economy expanding.

“It confirms our view that the economy was not able to sustain its momentum on current policy and policy needs to be loosened,” said Ken Peng, an economist with BNP Paribas.

“The fact that it waited so long meant it could have been responsible for the poor data in April. This sends a very positive signal that policymakers are accommodative.”

END_OF_DOCUMENT_TOKEN_TO_BE_REPLACED

The so-called troika of the European Union, the International Monetary Fund and the European Central Bank is willing to make six important changes to Greece’s financial aid agreement if a pro-European government is formed in the country, Real News said.

The Troika is willing to extend by one year to end 2015 the time for Greece to cut its budget deficit as well as to proceed with a restructuring of loans, the Athens-based newspaper reported in its Sunday edition preleased today, citing “well informed” sources at the European Commission.

The Troika is also willing to maintain the force of collective labor agreements, to alleviate the level of pension cuts or restore certain pensions to previous levels and to keep wage levels in the private sector and reduce the average tax burden on employees, the newspaper said.

END_OF_DOCUMENT_TOKEN_TO_BE_REPLACED

Another addition is indoor walking directions, allowing users in the US and Japan to use Google Maps to navigate inside malls and airports.

“This will help you get directions not only to a building’s front door, but also through those doors to the places where you want to go inside,” online magazine Stark Insider cited Benjamin Grol, product manager at Google, as saying.

END_OF_DOCUMENT_TOKEN_TO_BE_REPLACED

One trader estimated more than a dozen hedge funds and banks profited by taking the other side of J.P. Morgan’s trades. Firms such as BlueMountain Capital Management LLC and BlueCrest Capital Management LP each scored gains of about $30 million, according to people familiar with the matter. The firms declined to comment.

END_OF_DOCUMENT_TOKEN_TO_BE_REPLACED

Chesapeake Energy Corp said it had received a $3 billion loan from Goldman Sachs and Jeffries Group that will give it breathing room to sell assets and close a funding gap this year.

The unsecured loan will be used to repay money borrowed under its existing $4 billion revolving credit facility, Chesapeake said.

“This short-term loan from Goldman and Jefferies provides us with significant additional financial flexibility as we execute our asset sales during the remainder of 2012,” Chief Executive Aubrey McClendon said in a statement.

END_OF_DOCUMENT_TOKEN_TO_BE_REPLACED

This Week’s Winners and Losers 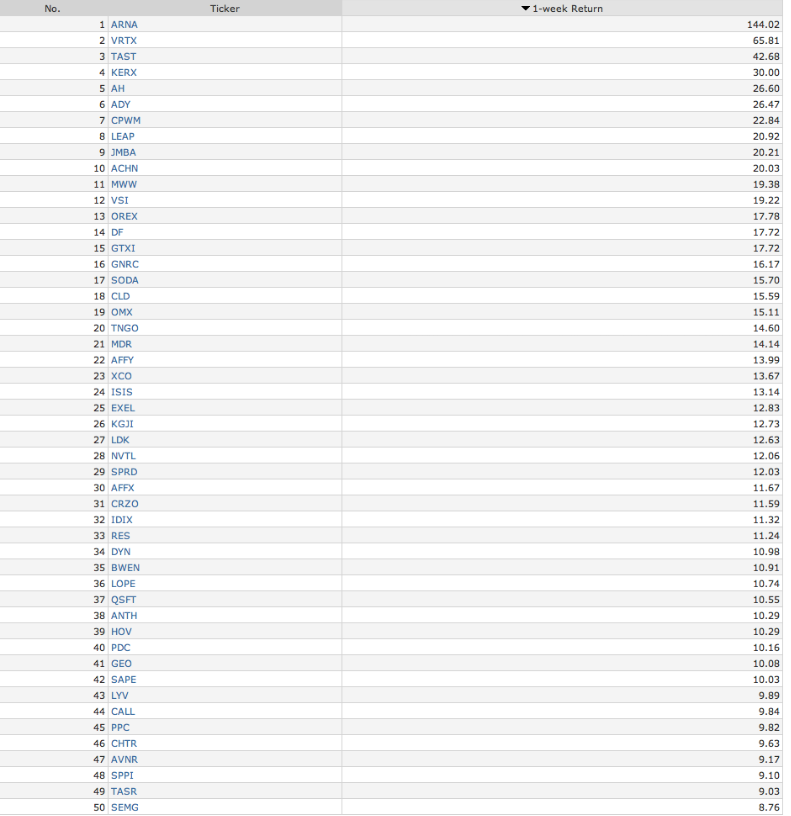 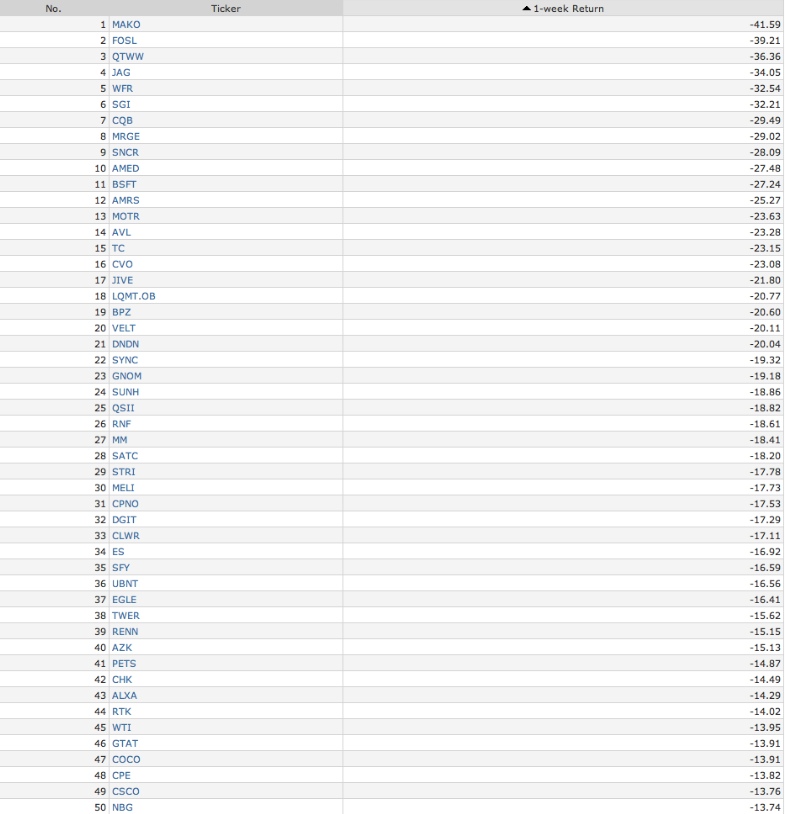 END_OF_DOCUMENT_TOKEN_TO_BE_REPLACED

Media Relations: Sandro Scenga, New York, Tel: +1 212-908-0278, Email: [email protected]
Additional information is available at www.fitchratings.com. The ratings above were solicited by, or on behalf of, the issuer, and therefore, Fitch has been compensated for the provision of the ratings.

END_OF_DOCUMENT_TOKEN_TO_BE_REPLACED

From 10-Q: “As part of our asset monetization planning and capital expenditure budgeting process, we closely monitor the resulting effects on the amounts and timing of our sources and uses of funds, particularly as they affect our ability to maintain compliance with the financial covenants of our corporate revolving bank credit facility. While asset monetizations enhance our liquidity, sales of producing natural gas and oil properties adversely affect the amount of cash flow we generate and reduce the amount and value of collateral available to secure our obligations, both of which are exacerbated by low natural gas prices. Thus the assets we select and schedule for monetization, our budgeted capital expenditures and our commodity price forecasts are carefully considered as we project our future ability to comply with the requirements of our corporate credit facility. As a result, we may delay one or more of our currently planned asset monetizations, or select other assets for monetization, in order to maintain our compliance. Continued compliance, however, is subject to all the risks that may impact our business strategy.”

END_OF_DOCUMENT_TOKEN_TO_BE_REPLACED 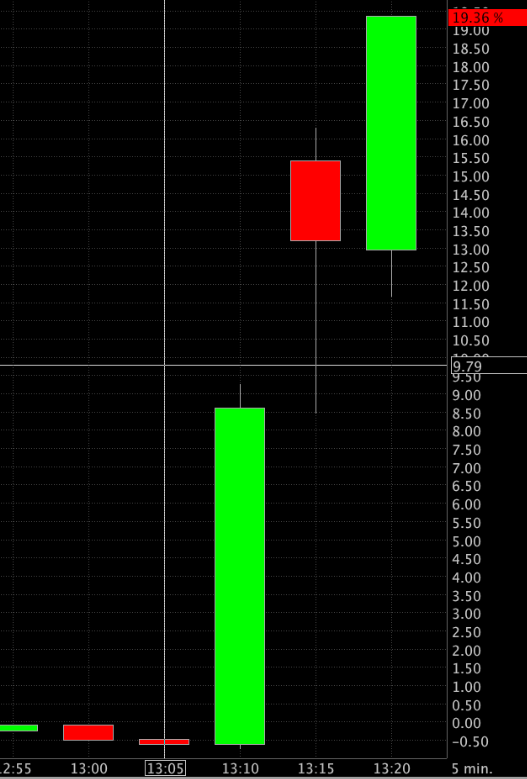 END_OF_DOCUMENT_TOKEN_TO_BE_REPLACED

Twitter Drama: Rihanna and Chris Brown Unfollow Each Other

Fri May 11, 2012 12:20pm EST Comments Off on Twitter Drama: Rihanna and Chris Brown Unfollow Each Other

The drama, it’s almost to much to bear.

“Assumptions! I didn’t say any names so if u took offense to it then it’s something you feel guilty about,” he countered.

END_OF_DOCUMENT_TOKEN_TO_BE_REPLACED 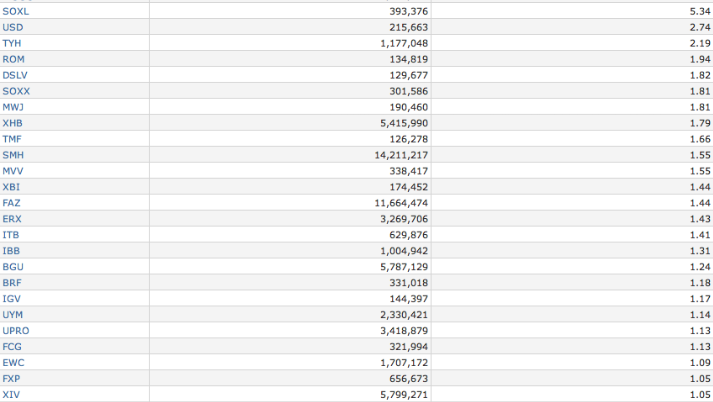 END_OF_DOCUMENT_TOKEN_TO_BE_REPLACED

As we discussed yesterday, some lucky guy(s) loaded up on JPM May $41 puts, EXPIRING TODAY, for as much as .40. Those same puts, after the bad news, are now worth more than $4.00. Not bad for a single days work.

END_OF_DOCUMENT_TOKEN_TO_BE_REPLACED

JPMorgan Chase downgraded to Hold at Stifel Nicolaus (40.74)
Stifel Nicolaus downgrades JPM to Hold from Buy saying the company now becomes somewhat unanalyzable. Firm asks how does one go about assessing the risk contained within the company’s significant derivatives book when they have no meaningful access to anything to analyze and the one thing that made them comfortable with the exposure was the sound risk management behind it (providing benefit of the doubt), which now comes into question?