“Argentina faces default Wednesday for the second time in 13 years if it doesn’t meet a deadline to make payments to a small group of bondholders. WSJ’s Matthew Cowley explains Argentina’s dispute with these creditors and the long-standing battle that stems from the country’s default in 2001. (Photo: Getty Images)

Argentina teetered on the brink of its second default in 13 years after talks with bondholders collapsed late Wednesday.

The setback, after glimmers of hope in recent days that a last-minute agreement could be reached, immediately sent Argentine stocks plunging in after-hours trading.

Still, there remained the possibility that talks could resume and a deal could eventually be reached.

At a news conference after talks with a court-appointed mediator ended Wednesday, Argentine Economy Minister Axel Kicillof, who had led the country’s delegation to New York, said “we won’t sign an agreement that would compromise Argentina’s future.” A spokeswoman later said negotiations would continue, without giving a timetable.

“Default is not a mere ‘technical’ condition, but rather a real and painful event that will hurt real people,” said Daniel Pollack, the mediator, in a statement late Wednesday. He added, “The full consequences of default are not predictable, but they certainly are not positive.”

The development is the latest turn in a yearslong battle between Argentina and a small group of hedge funds that have demanded full payment for bonds the country defaulted on in 2001. Argentina has refused to pay, despite an order by a U.S. District Court judge requiring it to pay the hedge funds. The issue came to a head Wednesday as Argentina missed a deadline to make a payment it owed to other bondholders, because the court order had prevented such a move.

Mr. Pollack, who had been trying to broker a deal between the two sides, said the country would “imminently” be in default. Standard & Poor’s Ratings Services had earlier Wednesday declared Argentina in default on some of its bonds. 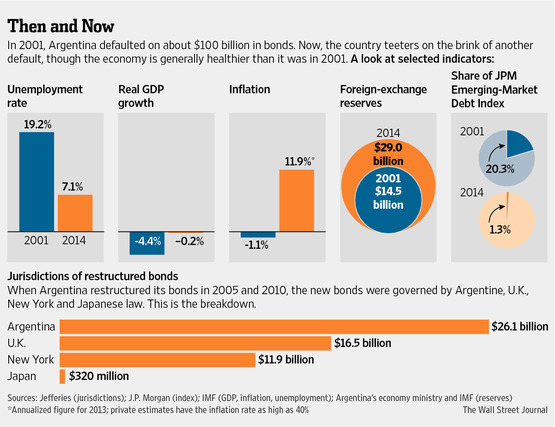 A default would pressure an economy already mired in recession, potentially leading to higher inflation and a weaker currency. The breakdown of negotiations also complicates President Cristina Kirchner‘s efforts to stabilize the economy ahead of elections next year…..”