Call it irrational exuberance, part two. Like old man river, the stock market just keeps rolling along. Last week it was Dow 17,000. Will this week see the market go even higher?

Before you jump on the bulls’ bandwagon, let me call to your attention a couple of salient statistics. At today’s level, the Dow industrials DJIA -0.72%  are up 5% since the beginning of this year. This is on top of a 35% leap in 2013. And in case you are keeping score, the Dow is now a whopping 155% above its low back in March 2009.

All that said, there are a number of warning signs out there that suggest the party may soon be over.

For one thing the economy has not grown anywhere near as much as stocks over the past 5-1/3 years; neither have corporate profits. 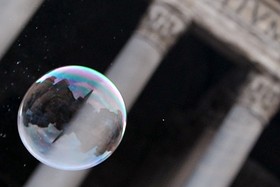 Additionally, price-to-earnings ratios are well above average. Robert Shiller, the noted Yale professor, economist and author, thinks that the market today is about at the valuation it was running at in 2008, just before stocks plunged.

In the past, the stock market has managed to avoid such excesses by dropping in price. A decline of 10% (a.k.a. a correction) used to occur about once every 12 months.

This bull market has managed to avoid a correction for 33 months — far longer than average. And correction or no, the current bull market is the fourth-longest since the Crash of 1929.

If you don’t have angst yet, here is another bit of history to chew on: Stocks usually take a header late in the third quarter, as well as in October. Indeed, some of the market’s biggest declines have occurred during this period.

Here is another tidbit: Bond prices are up…..”

If you enjoy the content at iBankCoin, please follow us on Twitter
2014-07-08
CRONKITE
Share
Previous Ukrainian Rulers aka Nazis Surrender Sovereignty to EU
Next A Heads Up on Some Stocks Going Into Earnings Season