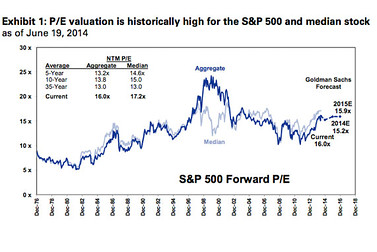 Even if the week didn’t start with the bang it ended with last week, the “this-market-is-looking-expensive” chatter will not be put down against the backdrop of a dovish Fed and an S&P 500 SPX -0.01% that has 22 record closes under its belt for the year so far. (The current bull market still has a below-average number of highs, read on.)

Goldman Sachs, for one, doesn’t see much standing in the way of more stock-market gains. In a note to clients on Friday, chief U.S. equity strategist David Kostin and his team said they expect the S&P 500 to grind up over the next two-plus years as earnings growth continues, and rolling forward their 12-month price target to 2,000 — 2,100 in 2015 and 2,200 in 2016 are further-out targets. (Note that of the most bearish Wall Street analysts, Deutsche Bank’s David Bianco also thinks stocks are looking pricey, but doesn’t see the S&P 500 reaching 2000 until end 2015.)

From Goldman comes the question and answer of how to find a happy meeting place at the intersection of value and growth. 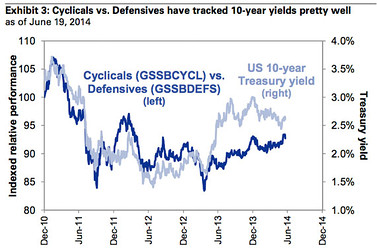 If you enjoy the content at iBankCoin, please follow us on Twitter
2014-06-24
CRONKITE
Share
Previous Study: 26% of Americans Have No Emergency Savings, Most are Asset Rich and Cash Poor
Next NAR Report Not So Bullish: The Über Wealthy Prop Up Yesterday’s Housing Report