CRONKITE Wed May 21, 2014 8:32am EST Comments Off on Wall Street Gambles on Debt Ridden LBOs

Wall Street banks are financing more private-equity takeovers with high levels of debt, despite warnings by regulators to reduce the amount of risky loans they make.

“The Federal Reserve and the Office of the Comptroller of the Currency last year issued guidance urging banks to avoid financing leveraged buyouts in most industries that would put debt on a company of more than six times its earnings before interest, taxes, depreciation and amortization, or Ebitda. The Fed and the OCC also told banks to limit borrowing agreements that stretch out payment timelines or don’t contain lender protections known as covenants.

Still, 40% of U.S. private-equity deals this year have used leverage above that six-times ratio deemed the upper acceptable limit by regulators, according to data compiled by S&P Capital IQ LCD. That is the highest percentage since the prefinancial-crisis peak of 52% of buyout loans in 2007. Such lending all but disappeared during the crisis but has risen each year since 2009.

In recent months, bank regulators have impressed upon banks that they aren’t happy with the amount of loans fueling buyouts, in which private-equity firms borrow money to buy companies with the intention of later selling them for a profit. 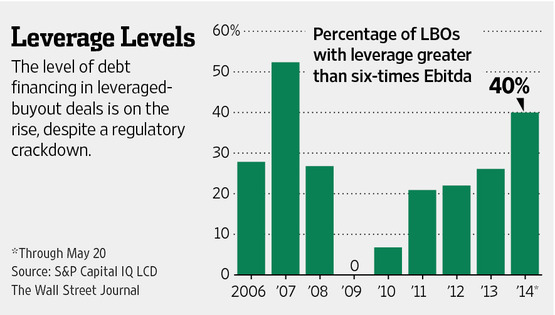 When a private equity firm buys a company, it typically borrows money to help fund the purchase that goes on the acquired company’s books. If the company runs into trouble, paying that debt can prove difficult, and investors in the debt can suffer.

The guidance is designed to deter banks from funding deals that regulators feel are too laden with debt, as companies with higher debt ratios are considered more likely to run into financial trouble.

These loans, provided by a group of banks, are often sold to a wider group of lenders and investors. Regulators are concerned that in the event of a financial downturn and diminished demand from investors, banks may find themselves stuck with large pipelines of risky debt.

The Fed and OCC, which issued the guidance in conjunction with the Federal Deposit Insurance Corp., declined to elaborate beyond previous statements. The agencies have said they share the same goal of ensuring proper risk management and are coordinating closely to implement the leveraged-lending guidance.

Leveraged-finance bankers have complained that the guidance isn’t clear, and adherence to the guidelines hasn’t been uniform, which some in the industry attribute to the Fed and OCC applying them inconsistently and to confusion around what exactly is allowed under the new policy.

The OCC has articulated a “no exceptions” policy, while the Fed has told the banks it oversees on this issue that they may participate in a small number of the leveraged-buyout deals that stray from the guidance, according to a person familiar with the matter….”