China Expects Growth of 7.5%, But They Are Extremely Worried Over Achieiving Estimates

CRONKITE Wed Mar 5, 2014 8:31am EST Comments Off on China Expects Growth of 7.5%, But They Are Extremely Worried Over Achieiving Estimates

“BEIJING—China’s leaders kept the growth target for their giant economy unchanged but signaled that they are more concerned than ever about reaching it, giving themselves the option of letting credit flow freely to keep from falling short.

For years, China kept a growth target of about 7.5% but actually grew far faster; in the last two years the economy has barely cleared that figure, and many economists have said it would have a tougher time meeting the goal this year as its economy matures and global demand for its exports comes under pressure. That is a troubling trend for the rest of the world, which has increasingly depended on China to fuel the global economy.

At home, as well, the Chinese regime has felt pressures that can be exacerbated by a slowing growth rate. Last week the government set up a committee to improve cybersecurity and police the Internet, upsetting some middle-class Chinese who have taken to social media. Over the weekend, assailants rampaged through a provincial railway station, killing 29 in what the government says was the work of separatists from the northwestern Xinjiang region. 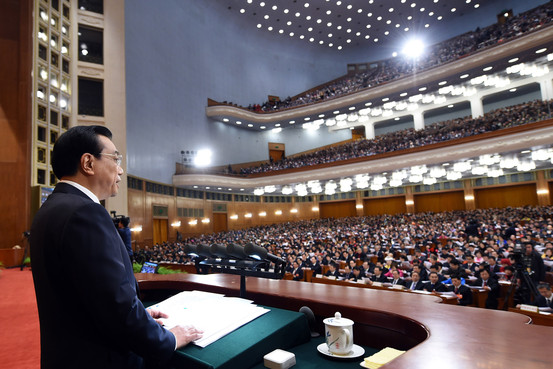 In opening the annual session of the national legislature Wednesday in the Great Hall of the People, the leaders and the more than 2,900 delegates stood for a moment of silence to honor the victims of Saturday’s knife attack.

In his work report to the National People’s Congress, Premier Li Keqiang said government spending is being increased by more than 9%, with a push to build more public housing, and the overall fiscal deficit is projected to rise more than 12%.

Mr. Li called for a “balanced” monetary policy, in a change from the “prudent” monetary policy used last year. The slight wording change allows the government to loosen credit, a move that economists have said would likely give a short-term boost but worsen the growing credit problems plaguing local governments and the shadow-banking market.

Economists are bracing for trust and bond defaults this year and greater market volatility given the number of debt-plagued companies close to the edge. A third of the outstanding 4.6 trillion yuan ($750 billion) trust loans are due to mature this year, which many struggling firms rely on for capital…..”