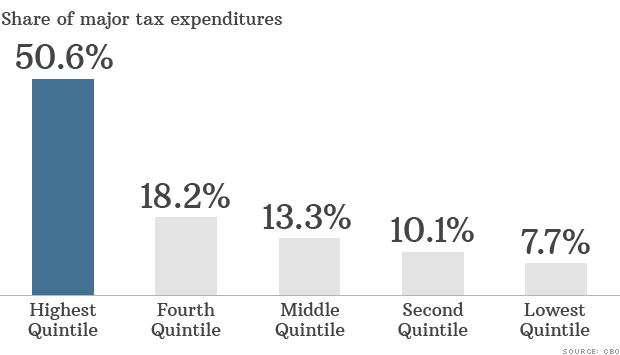 There are more than 200 tax breaks in the U.S. tax code, and the top 10 for individuals are by far the most expensive. How expensive? They will cost federal coffers $12 trillion over the next decade.

But the dollar benefits of those top 10 breaks are not distributed evenly across income groups.

The top 20% of households will enjoy more than half of the combined benefits of the major tax expenditures this year, according to a report by the Congressional Budget Office released Wednesday.

And within that top 20%, the benefits skew disproportionately to the highest earners.

The largest breaks include the tax-free treatment of employer contributions to workers’health insurance; tax preferred retirement savings; state and local tax deductions; and reduced rates on capital gains and dividends.

That’s not to say that low- and middle-income households don’t benefit from the major tax breaks and wouldn’t notice if they were curtailed — a distinct possibility when lawmakers eventually do embark on tax reform.

The lowest earners, who make no more than $25,000 as singles or $50,000 as four-person households, will get only 8% of the benefit of the tax expenditures. What value they do see will come primarily from the Earned Income Tax Credit and, to a lesser extent, the child tax credit.

If you enjoy the content at iBankCoin, please follow us on Twitter
2013-05-29
CRONKITE
Share
Previous $BLK’s Fink: DOW 28k in Five to Six Years
Next Fund Managers Report a Spike in Margin Loans to Buy Real Estate

State of the Union: Lower Expectations for Living Standards

The U.S. Hits the Bottom of Yet Another List