My motto is no matter what i believe, no matter what my opinion is; i will always explore and listen to opposing arguments to get a better handle on things.

Here is a documentary that gave some surprising facts in regards to climate change along with the latest theories.

Don’t write this one off.

Since measurements began in the 1950s, scientists have discovered that there has been a decline of sunlight reaching the Earth; they called it global dimming. But according to a paper published in the journal Science this month, the dimming did not continue into the 1990s and indeed since the 1980s scientists have observed a widespread brightening. What caused the dimming to go down and what effect will it have, if any, on climate change? The film explores the theory that pollution is shielding the oceans from the full power of the Sun, and disrupting the pattern of the world-s rainfall. There is evidence that dimming caused the droughts in sub-Saharan Africa which claimed hundreds of thousands of lives in the 1970s and 1980s. It reveals that we may have grossly underestimated the speed at which our climate is changing. At its heart is a deadly new phenomenon. One that until very recently scientists refused to believe even existed. Alarmingly, the dimming continues today, and Asia, home to half the world-s population is currently under threat. 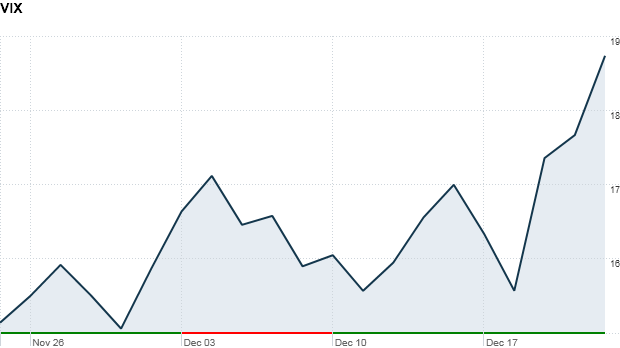 END_OF_DOCUMENT_TOKEN_TO_BE_REPLACED

“A decision by House Republicans to cancel a vote on House Speaker John Boehner’s fiscal-cliff proposal increases the chances the U.S. economy will plunge into a recession next year, said Mohamed El-Erian, CEO of fund giant Pimco.

The rebellion against Boehner among his fellow Republicans stalls a deal with the White House to craft a 2013 fiscal framework and avoid what many see as a preventable recession.

Sweeping tax hikes are due to take effect at the end of this year at the same time deep cuts to government spending kick in, a combination known as a fiscal cliff that could tip the country into recession next year, according to both government and private-sector estimates…”

END_OF_DOCUMENT_TOKEN_TO_BE_REPLACED

ZERVOS: The Fed Is Risking An Inflation Disaster, And There Will Only Be One Place To Hide

Fri Dec 21, 2012 3:46pm EST Comments Off on ZERVOS: The Fed Is Risking An Inflation Disaster, And There Will Only Be One Place To Hide

“Jefferies’ economist David Zervos is back in a new note, which takes stock of developments at the Fed and the Bank of Japan.

The Fed, of course, recently adopted Evans Rule, which indicates that tightening won’t occur until unemployment gets to around 6.5%, or inflation expectations are around 2.5%. The Bank of Japan is expected to see a new round of aggressive policy, thanks to the wishes of incoming Prime Minister Shinzo Abe.

While markets seem to be pretty happy about it all (ESPECIALLY in Japan) Zervos thinks it will end in uncontrollable inflation, like in other past Keynes-inspired experiments.

In his note, he recounts his time at The Fed:”

END_OF_DOCUMENT_TOKEN_TO_BE_REPLACED

Fri Dec 21, 2012 3:43pm EST Comments Off on The Most Accurate Economist On Wall Street Sees A Big Bullish Wildcard For America

“One of the most bullish economic stories in the world has been the recent recovery of the U.S. housing market.

Maury Harris, UBS’s Chief U.S. Economist, is particularly optimistic considering the snapback of housing formation, which is now back above 1 million per year.

We recently had lunch with Harris, who is repeatedly recognized as the most accurate economist on Wall Street and is one of Bloomberg’s 50 most influential people in the world.

END_OF_DOCUMENT_TOKEN_TO_BE_REPLACED

This was his presentation, all 300 pages of it, where he declared the stock was worth $00.00, full fledged ponzi-scheme.

END_OF_DOCUMENT_TOKEN_TO_BE_REPLACED

Katt Williams is a Man of Great Repute

On Nov. 9, Williams was sued by his former female assistant, who alleges the comedian assaulted her at his house in October. On Nov. 14, Williams was reportedly arrested following a fight at an Oakland club. The on Nov. 27, Williams was arrested in Sacramento after leading police on a chase while driving his three-wheel ATV. The performer had been driving on the sidewalk when police tried to pull him over, and he took off driving down the wrong side of the road. Three days later, while performing in Seattle he whipped his microphone at an audience member, hitting him in the head.

Then on Dec. 3, he was arrested again after a bar fight, where he allegedly threatened the bar’s manager with a pool cue, and then followed a family to the parking lot and threw a cigarette at a woman, hitting her in the eye.

The next day, Williams was kicked out of a hotel in Seattle , and he announced he was retiring from stand-up comedy, and two days later decided it was time to un-retire.

After all that, a Seattle judge issued two warrants after Williams failed to show up to court.

END_OF_DOCUMENT_TOKEN_TO_BE_REPLACED

Gapping Up and Down This Morning

END_OF_DOCUMENT_TOKEN_TO_BE_REPLACED

Fri Dec 21, 2012 8:47am EST Comments Off on Upgrades and Downgrades This Morning

END_OF_DOCUMENT_TOKEN_TO_BE_REPLACED

Fri Dec 21, 2012 8:21am EST Comments Off on Obama Urges Americans to Keep Up Pressure for Tighter Gun Control

“(Reuters) – President Barack Obama urged Americans on Friday to keep up the pressure on lawmakers to tighten gun regulations as a result of the mass shooting of 26 people in Newtown, Connecticut, a week ago.

Obama issued a videotaped response to the several hundred thousand people who have signed a petition posted on the White House website calling for toughened gun laws in response to the shooting, in which 20 school children and six adults were killed at a Newtown school.

“I need your help,” Obama said in the video. “If we’re going to succeed, it’s going to take a sustained effort from mothers and fathers, daughters and sons, law enforcement and responsible gun owners, organizing, speaking up, calling their members of Congress as many times as it takes, standing up and saying ‘Enough’ on behalf of all our kids.”

Obama has called for Congress to approve a ban on the sale in the United States of military-style assault weapons, a ban on the sale of high-capacity ammunition clips, and to ensure everyone gets a background check before they buy a gun, even if the purchase takes place at an open-air gun show currently exempt from such requirements….”

END_OF_DOCUMENT_TOKEN_TO_BE_REPLACED

“Struggling Finnish mobile phone maker Nokia has settled its patent dispute with BlackBerry maker Research in Motion in return for payments, as it tries to exploit its trove of technology patents to boost its finances.

Terms of the agreement were confidential, but Nokia said on Friday it included a one-time payment to be booked in the fourth quarter, as well as ongoing fees, all to be paid by RIM.

Nokia is one of the industry’s top patent holders, having invested 45 billion euros ($60 billion) in mobile research and development over the past two decades.

It has been trying to make use of that legacy to ensure its survival, amid a fall in sales as well as cash. The Finnish firm is battling to recover lost ground in the lucrative smartphone market to the likes of Apple and Samsung.

END_OF_DOCUMENT_TOKEN_TO_BE_REPLACED

U.S. Inteligence: We Have “Moderate Confidence” That One or More Governments Directed Multi Nationals to Acquire Critical American Technologies in a “Coordinated Effort”

Fri Dec 21, 2012 8:17am EST Comments Off on U.S. Inteligence: We Have “Moderate Confidence” That One or More Governments Directed Multi Nationals to Acquire Critical American Technologies in a “Coordinated Effort”

“U.S. intelligence officials found with “moderate confidence” that one or more foreign governments had directed companies to acquire critical American technologies in a “coordinated strategy”.

The conclusion in a report by the Committee on Foreign Investment in the U.S. (Cfius), which vets sensitive acquisitions of U.S. assets by foreign companies, is a sign of growing alarm in the Obama administration about the motives of foreign state actors in buying U.S. companies.

It said evidence of such “suspect behavior” could include patterns of actual or attempted takeovers and the provision of “narrowly targeted incentives by foreign governments”, such as grants, loans or tax breaks, to companies acquiring U.S. targets.

The Treasury, which chairs Cfius, would not provide more details about any countries suspected by intelligence officials of coordinating with their companies. But it said a classified report delivered to Congress offered information supporting the conclusion.

“It is a shot across the bow. They’re saying ‘we know you are doing this and we are on the lookout for you’. Just know some of these are not going to get approved,” said Jamie Garelick, the former deputy attorney-general under the Clinton administration.”

END_OF_DOCUMENT_TOKEN_TO_BE_REPLACED

Herbalife to Strike Back!

Herbalife will host an analyst day the week of Jan 7th, 2013 to respond in detail to inaccurate information contained in Pershing Square’s presentation

END_OF_DOCUMENT_TOKEN_TO_BE_REPLACED

Markets Wonder: Can We Get to Plan C B4 Year End?

“The U.S. House of Representatives Speaker John Boehner called off a vote on Thursday to raise taxes for wealthy Americans in a proposal dubbed “Plan B,” bringing the country on the brink of going over the “fiscal cliff.”

A series of tax increases and spending cuts are expected to kick off on January 1, if lawmakers don’t reach a compromise and this could push the U.S. economy into a recession.

But analysts told CNBC they expect a “Plan C” within a few days that would help U.S. avert a fiscal crisis.

“I’m sure a ‘Plan C’ will materialize over the next few days, there’s time for things to be renegotiated, and 2013 will be in better shape for equity markets,” said Jim McCafferty, managing director and co-head of equity research with CIMB Securities in Hong Kong….”

END_OF_DOCUMENT_TOKEN_TO_BE_REPLACED

Avio, which supplies engine parts for the Eurofighter Typhoon and engine makers GE and Rolls Royce Holdings Plc , was acquired in 2006 by Cinven in a deal that valued the company at about 2.6 billion euros.

The deal will not include Avio’s aerospace unit.”

END_OF_DOCUMENT_TOKEN_TO_BE_REPLACED

“LONDON (Reuters) – Aviva , Britain’s No. 2 insurer, has agreed to sell its U.S. business for $1.8 billion, far less than it paid for it and the biggest disposal so far in a reorganization aimed at boosting its underperforming share price.

The sale price is below the $2.9 billion that Aviva paid for the U.S. business in 2006, but the insurer said the deal would make it financially stronger by reducing capital requirements and cutting its exposure to volatile credit investments.

Aviva’s economic capital surplus – the amount by which its capital reserves exceed its requirements – will rise by 1.1 billion pounds ($1.79 billion), the company said.

“The disposal of the U.S. business represents a successful end to the year and sets us up well for 2013,” Aviva chairman John McFarlane said in a statement.

Aviva shares were down 0.5 percent by 5:55 a.m. ET, against a 0.8 percent fall in the STOXX 600 European insurance share index <.sxip>. The stock has risen 27 percent since the start of the year, lagging a 33 percent gain for the sector.

The U.S. sale forms part of a plan launched by Aviva in July to sell or close 16 businesses that tie up over a third of the insurer’s capital while contributing just 18 percent of operating profit…”