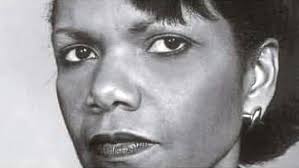 Late Thursday evening, Mitt Romney's presidential campaign launched a new fundraising drive, 'Meet The VP' -- just as Romney himself has narrowed the field of candidates to a handful, sources reveal.

And a surprise name is now near the top of the list: Former Secretary of State Condoleezza Rice!

The timing of the announcement is now set for 'coming weeks'.

It was Condi who received two standing ovations at Romney's Utah retreat a few weeks ago, and everyone left with her name on their lips.

Rice made an extended argument for American leadership in the world.

In recent days, she emailed supporters:

"2012 is perhaps a turning point for the United States."

"The upcoming elections loom as one of the most important in my lifetime," she warned. "I'm very often asked to speak about our current foreign policy and the challenges that lie before us. However, we, as a country, are not going to be able to address any of those international challenges unless we first get our domestic house in order."


If you enjoy the content at iBankCoin, please follow us on Twitter
2012-07-12
chessNwine
Share
Previous Asia Pushes Slightly Higher Ahead of China GDP Data
Next Italy’s Bond Rating Cut By Moody’s On Contagion, Funding Risks

FLASH: A Message From the President

Live Feed of the Boston Manhunt