THROWING IN THE TOWEL ON GE

I’ve held GE for the better part of a decade. It has been, by far, the worst investing decision I have made in the last thirty years. I could place the blame on Jeff Immelt, but that is like blaming Barack Hussein Obama for the Iraq War. 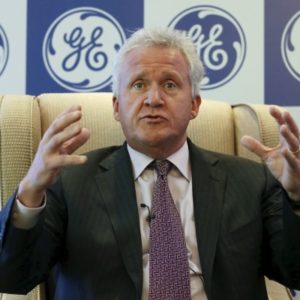 Please do not tell me that I have made a mistake. GE’s 52-week chart looks pretty darned good, in fact. But it is still far below what I paid for it and I do not believe it will fare well in a market correction – which is imminent in my opinion.

I blame Jack Welch, that crazy loon you often see on CNBC, usually spouting complete nonsense to the delight of the idiot talking heads on television’s worst financial news channel. 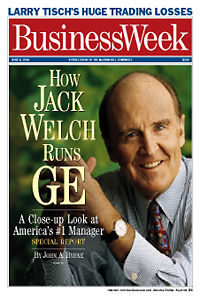 Jack Welch, the Genius behind Six Sigma, the man who was once lauded as the most brilliant CEO of the 20th Century. This cover should have read “How Jack Welch Will Ruin GE”. Win at any cost, number one at any cost (especially employee job security), ill-advised diversification, you name it, Jack did it. Poorly. The effects of his reign really only became clear once he was gone to write books about his own brilliance.

In the eyes of many shareholders Immelt has not done much better, moving far too slowly for investors to take him seriously in divesting from the disaster that was GE Capital. Despite the S&P and DJIA regaining all that was lost in the crash of 2008, GE has not performed well at all, rat-slapped in comparison to the rest of the S&P. 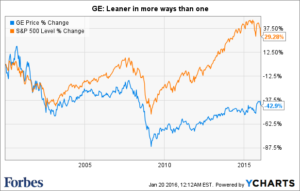 Immelt has been able to keep his job due to GE being TBTP (“Too Big To Proxy”). Unless your last name is Icahn, the chances of unseating any of today’s Rock Star CEO’s is highly unlikely. To his credit, GE Capital is now a fraction of what it was only two years ago, as GE attempts to “transform itself into a Technology Company” – going so far as to move it’s HQ to Silicon Valley East, aka Boston – leaving the poisonous corporate tax disaster that is my home state of Connecticut reeling in it’s wake.

I Sold my GE yesterday morning and I will take what is left of my original “investment” and use it to add to my growing stake in TLT, which will now reach the 25% level of my portfolio, as prescribed by my Primary Care Physician, Dr. Fly.

Herewith, a YTD comparison of TLT and GE prices, with GE being the crappy blue line, not the lovely yellow one: 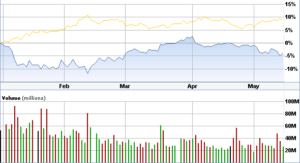 Industrials segment has been kicking it, but all other segments of GE have been performing miserably. 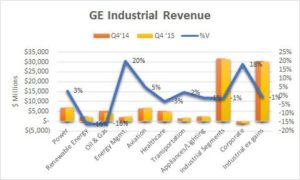 This has all been written about before by far wiser folk than I. Jack Welch became the Model of what a modern American CEO should aspire to be. He almost single-handedly transformed what was a culture of Employer Paternalism into a culture of win-at-all-cost regardless of the effect on the workforce.

Carly Fiorina’s tenure at Hewlett-Packard is a perfect example of Jack Welch’s heartless brand of  Corporate Ethics. I highly recommend Thomas O’Boyle’s brilliant book to anyone interested in the subject: 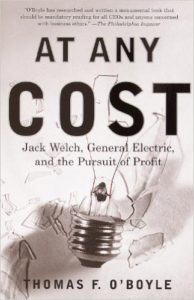 If you enjoy the content at iBankCoin, please follow us on Twitter
2016-05-18
The Maven
Share
Previous IMF Proposes Eurozone Debt Relief for Greece Until 2040
Next Why are the Summer Olympics held in countries deeply in debt?