The Butcher of Sears Holdings

Ten years ago Sears Holdings Corp boss Eddie Lampert was widely regarded as the best investor of his his generation. Already a billionaire at 43, Lampert had levered a sweetheart, bizarre deal for Kmart into ownership of the once mighty Sears. He seemed poised to reverse the fortunes of both chains and turn the combined entity into a retail juggernaut. 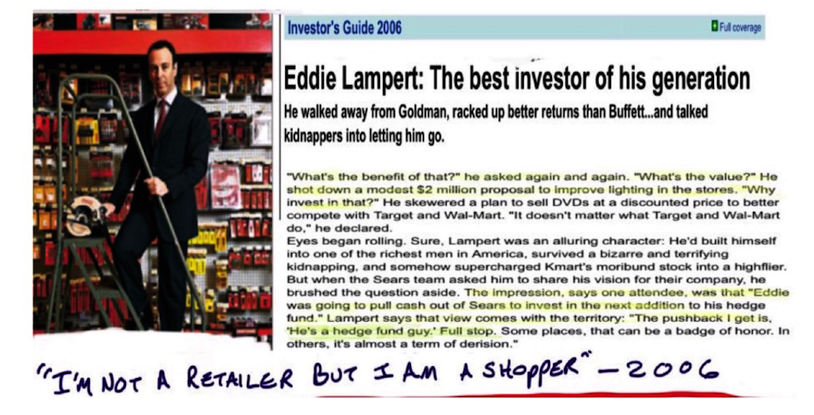 “Eddie Lampert is the Steve Jobs of retail: he thinks differently and acts differently, with extraordinary results” raved Fortune.

As it turns out, not every aspect of retail needed a rethinking. Take for instance the notion of investing in the stores. Lampert proudly shot down minor investments on store maintenance, sneering at the lack of ROI in providing customers a clean, safe place to shop. He spun off real estate and gutted the balance sheet with buybacks.

“The pushback I get is, ‘he’s a hedge fund guy’. Full stop. Some places, that can be a badge of honor. In others, it’s almost a term of derision.”

10 years later it’s easy to be more specific. As far as retailers are concerned calling someone a “hedge fund manager” is tantamount to hate speech. 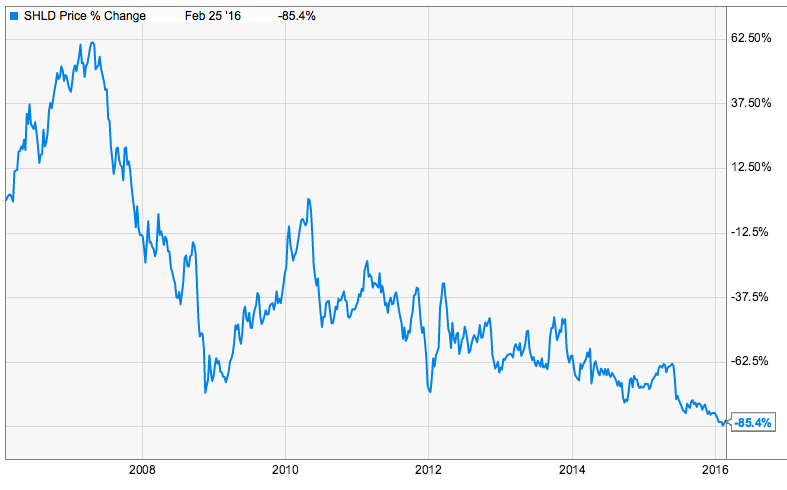 Since those remarks were published shares of SHLD are down more than 85%. The company has posted net losses of $3.8b, including results announced this morning. Same store sales have fallen every year, including a stunning -9.2% for the year just ended. 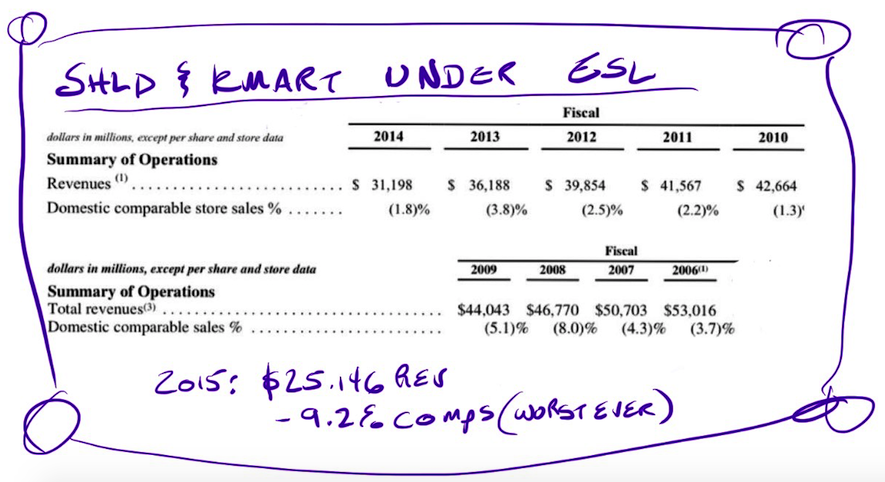 SHLD’s top-line has dropped by more than 50%, accounting for more than 100% of the entire decline in total US department store revenues over the last 10 years (based on census data). 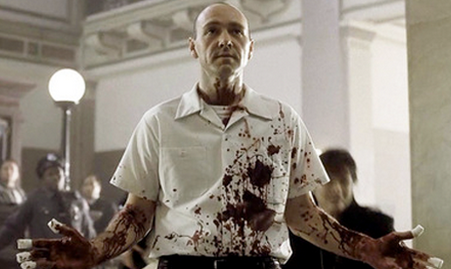 What makes Sears interesting isn’t the abject failure of the stores but the mystery of whether this is the story of a bumbling retail exec or a masterfully cold-blooded, lucrative vivisection of what was the once the biggest company in the world.

People in finance discuss Lampert in hushed tones. A former Goldman Sachs employee and Richard Rainwater protege, Lampert is more connected than Keyser Soze. For years anyone daring to bash the company could expect to be pressured by Lampert acolytes for inaccuracies real and imagined. (Not a rumor… actually happened to me several times).

Such murkiness only fuels the legend. My former colleague Mike Santoli put together this back-of-the-napkin family tree for the Sears corporation. It’s a starting point for calculating ESL’s ROI but it doesn’t tell nearly the full story. 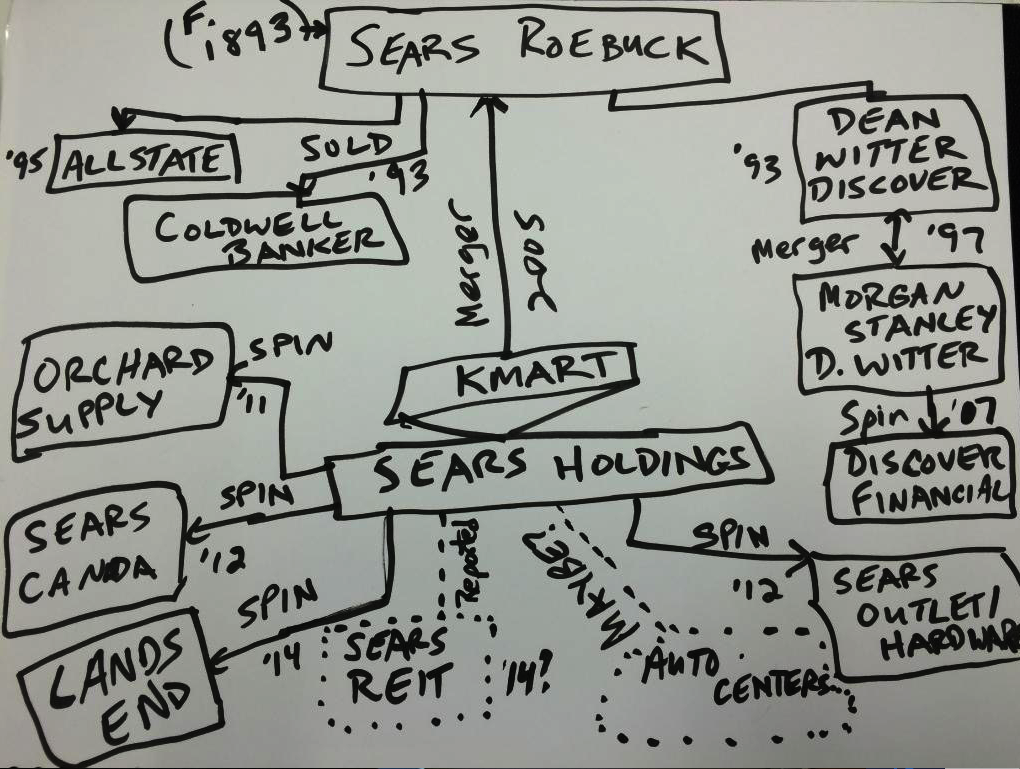 Lampert has been taking control of Sears assets and cutting questionable lending deals using assorted companies under his control since the early stages of stealth liquidation.

Is it illegal to tell thousands of investors and employees that you’re pushing them into the future even as you slowly chip out the ice from beneath their feet? No. The not-so-hidden secret of finance is that the line between crime and opportunism is defined by who has the best lawyers.

Here’s the link to an SEC filing describing a deal between Sears and ESL in which Lampert loaned Sears $400 million. For collateral ESL forced Sears to put up “25 locations of the lender’s choice”. The value of the real estate in question would be anywhere between $500 million and $1.5 billion, based on prior transactions.

Lampert has been both sugar daddy enabler and butcher to SHLD for years. Once  the company’s cash had been spent on buybacks Sears started requiring emergency funding on a semi-regular basis. ESL shell companies have been there to make the loans every time. Altruism or usury is in the eye of the beholder. Since he’s on both sides of every deal it’s all but impossible to figure out whether or not Lampert has been abusing his position.

Today Sears announced that Bruce Berkowitz of Fairholme is joining the board. Berkowitz is a savvy investor, despite being a SHLD holder. Previously supportive of Lampert, Berkowitz signaled a change of tone, and increased position size, late last year. He now controls over 20% of the company and is ready to start flexing.

At this point Berkowitz is likely to focus on making sure his investors get a fair cut of whatever meat is left on the bone. Sears has been doing everything it can to drive away customers for the last decade. After this much damage Berkowitz’ goal isn’t a recovery but a dignified end.