There was a little bounce on Friday. Which is to say we didn’t close on the lows.

The bullish scenario is we’re oversold, sentiment is “wetting myself” and it wouldn’t be a bear market if it didn’t squeeze the hell out of bears every once in a while. We’re down 10% in a straight line. That doesn’t mean tomorrow is “due” to move higher. That’s not how odds work.

Market days are independent, for betting purposes. Like a roulette table. Sharp reversals can and do occur within larger trends but by definition they have to be random.

A face-ripping, explosion of a rally is coming but there aren’t any cheap ways to wager on it. Calls are still expensive. Stocks aren’t cheap, or even possible to value, in theory until oil stabilizes AND China gets done having to kick traders in the ass with jackboots to get them to buy stocks in the Shanghai Comp ($SSEC). (see: China Has Us By the Wontons).

You want to get long ordinary stocks? Yeah. All bullshit aside. It’s a terrible stock market. That’s an awful chart, even without the monster.

The fundamentals are just as bad. I’ve been doing some work on buybacks. To bring you up to speed; companies have borrowing a lot of money to buy back shares. Corporations aren’t stockpiling cash, at least not in the US. They’ve levered up to inflate short term EPS. Leverage taken on to do buybacks is about to be a Big Freaking Deal. Other folks have noticed this (a couple in the comment section). It’s very bad.

Buybacks are this era’s Greenmail. Just a different way for activists to generate short term performance. They work in up cycles. As long-term plans buybacks are a short-sighted, indefensibly cynical allocation of capital to appease hedge funds. Since this opinion runs contrary to the Word of Saint Buffett of Omaha I’ve taken endless abuse for  mocking buybacks of the last few years.

I’m about to be right in a huge way. Which sort of sucks.

Ive been looking at these things all weekend. I’ll use Macy’s as an example but they’re far from alone

Here’s what Macy’s has done in buybacks since 2011: 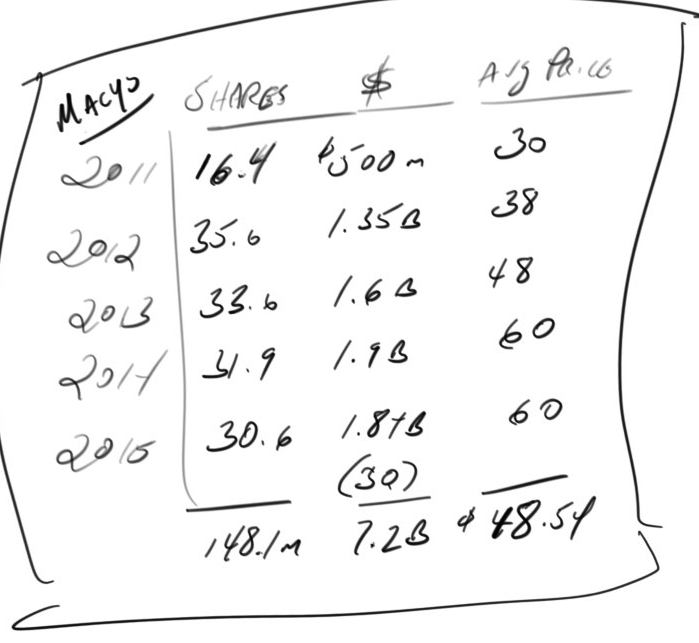 Forgive my handwriting.  It’s a little sloppy. I’ve been looking at this stuff since 2am.

Some very basic accounting: Repurchased shares aren’t “bought and held”. They are retired to reduce the share count. Effectively the shares, and money spent on them are just lit on fire.

Because all repurchased shares go to zero (with the weird approval of investors) it technically doesn’t matter that Macy’s would be down $1.6b on its Macy’s position of repurchased shares. Again, if they had any value at all. That’s a loss of 22% against a 45% gain in the S&P500. Buybacks are tantamount to a group of executives running a hedge fund that buys only one stock, on which it has limitless inside information and Macy’s lost 22%.

The simple numerical fact of this makes the idea that buybacks “are an expression of confidence” laughably obtuse. When a buddy brags about his kid being a great athlete do you take him at face value? Of course not. CEOs always like their chances. That’s what makes them good CEOs. It also makes them shitty stock pickers.

Like most companies Macy’s always thinks its own stock is a buy. In the short term, buybacks boost earnings per share, often triggering CEO bonuses and delighting activists! For a while

For a while EPS looks awesome because of the share reduction but net income lags. The whole time enterprise value is erodes. Long-term investors get a bigger chunk of a lesser business and no cash at all. Then the earnings (orange line) rolls over and takes the stock with it:

(Dispense with this quickly: When Wall Street tells you it’s giving you cash and you don’t see any money in your hand you’ve been had.)

Debt is a cruel mistress.

Bookie or banker, loan givers don’t care about your personal problems. “No winter so coats didn’t sell? Screw you, give me my money. Bought your own shares at $50 and now you don’t have the shares or the cash? TS, give me my money.”

Now business has turned down, stores haven’t gotten any attention. Activists are prodding mercilessly. Macy’s is sitting on billions of dollars in winter coats in some sort of monumental inventory screw up that we’ll never know the full story on. Seriously, they could do hands across America tying coat sleeves together. It’s insane.

So earnings, both on a net and per share basis are going to end up much, much lower than expected. Shareholders have no cash. Macy’s has no cash. They just have 80% of the world’s down and impatient bankers.

The activists have the cash. Because they sold their shares to Macy’s and the rest of the muppets.

Macy’s and its shareholders have been conned. Everyone buying into buybacks has been. Corporate America borrowed cheap and bought itself. According to FactSet as of Q3 180 S&P500 companies have spent more on buybacks than they’ve earned in the last 12 months.

It’s not a story across the whole market yet. It will be.