China Has Us By The Wontons

Stocks are flat for the moment after Chinese officials responded to Monday’s sell-off just as I suggested they would: They sprayed money at the problem and once again issued vague warnings to those who would bet against stocks trading on the Shanghai Composite. It was the largest injection since September, according to Xinghua.

By the way, @XHNews, the sanctioned Chinese gov’t mouthpiece, is a great Twitter follow. Since the crash started the good folks at @XHNews have gleefully reported more than 200 arrests that have been made as the government cracks down on stock negativity, basically. As is the case in all witch hunts, the charges haven’t exactly been set but guilt is assumed. The highest profile demon is Xu Xiang, head of one of China’s largest hedge funds. Xiang’s funds rose during the crash, raising suspicious that he was engaged in seditious hedging.

For China’s more visual learners @XHNews has hilarious and informative editorial cartoons like this: 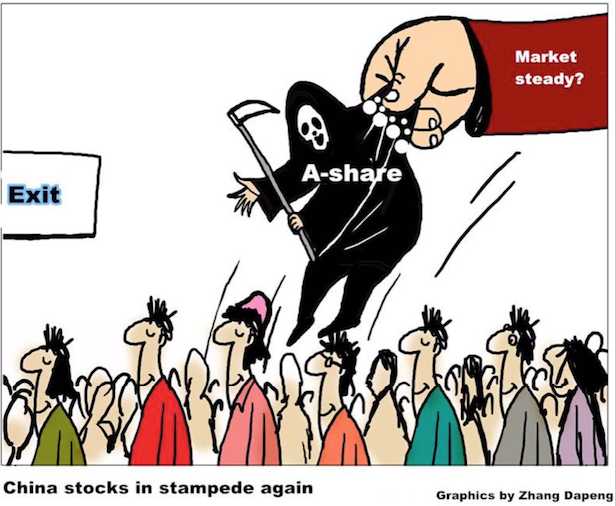 I mentioned it a couple times yesterday but it’s a point worth repeating: Until the Chinese figure out more nuanced ways to manipulate their stock market everything in your portfolio has airpocket risk.

Airpocket risk is waking up to find your stocks down 10%. It’s what happens when the rules of the game change overnight.

Here’s a list of the biggest intraday swings in the history of the DJIA: 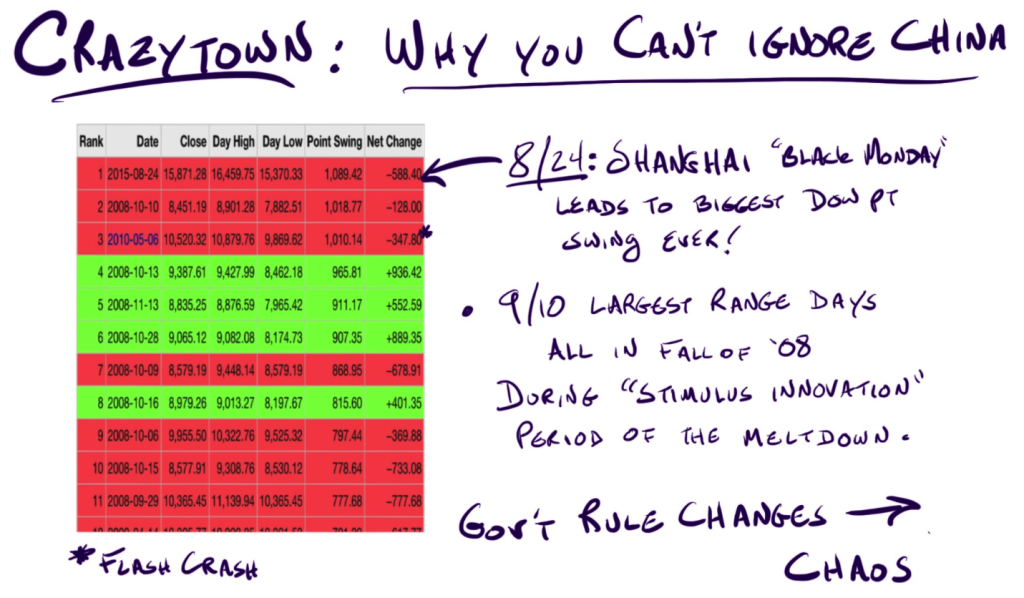 Throw out the flash crash of 2010. 9 of the rest of the top 10 happened during the financial meltdown. I was doing live television on CNBC every night at the time. It was like going door to door across the country to tell people their dog had been hit by a car every single night. This was the period the XLF financial ETF fell 50% in 2 months, despite the SEC making it against the law to short bank stocks. The Fed changed the rules nightly. Lehman got killed mostly because no one liked Dick Fuld. AIG was saved because it owed Goldman money. Only psychos and adrenaline junkies even tried to trade that mess. The only smart positions were cash and fetal.

The other entry on the list was last August when China’s Black Monday led to US shares opening down over 1,000 Dow Points. That wasn’t a flash crash. It was the second largest economy in the world trying to force people to buy stocks.

Here’s the $SSEC and the $SPX for the month of August: 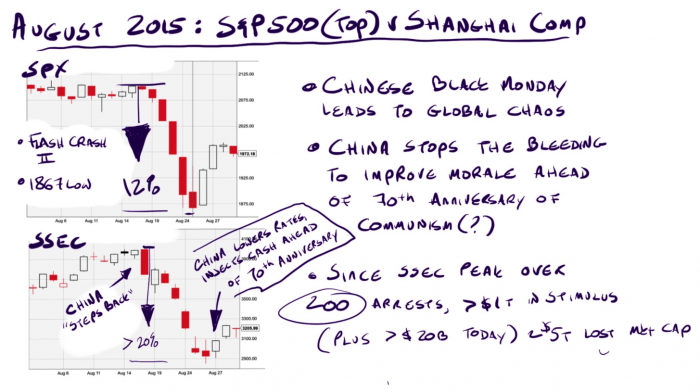