Something is going on… Greece is , , … … it’s official, default CDS triggered!

Okay, old news by the time you hear it… but this is finally good for the stability of the market, as it may restore confidence to the CDS markets and at least the ability to insure the bond market may slow down the flight of capital out of bonds and into stocks to more stable levels. But with the vix this low already, you can’t exactly benefit from betting against volatility. Additionally, it is only short term. If anything, the longer term picture should see rising volatility as the structural problems of the Euro remain and the markets have been completely complacent regarding the Euro troubles.

Money poured strongly into stocks as capital fleas the bond markets. I was expecting the official default to restore confidence to the CDS and bond markets, but there are other reasons capital is fleeing.

US treasury yields are spiking in the short term. Will that cause problems if rates get hiked? For the short lived move, perhaps, but it means capital is flowing out of bonds, and it is not isolated in the US but is instead global. Gold+silver are showing early indication of potentially a big breakdown here that could produce a very significant low this year if it occurs. People do not behave rational in the sense that a lower rate causes them to borrow more. I have researched and found no evidence of such a correlation of lower rates=more borrowing. Instead, rate hikes can sometimes have the opposite effect as banks have more incentive to lend when they can do so at higher interest rates, and more incentive to find ways to promote buying of real estate, rather than stories of fear. Meanwhile, people see rising rates and want to lock in the relatively low rate while they still can, and they fear missing out a little bit more. I personally do not buy the “conventional wisdom” that rising interest rates are bad if it is happening for the right reasons. Lower rates has meant lower stock prices many times. So rising bond yields which could lead to rate hikes in the future, may not be a bad thing.

Although those examples were isolated instances, the “insane” rate hikes of Volker era continued to see high inflation. Certainly interest rates going up or down doesn’t always pan out as expected. Money in any given currency is traded and treated as a commodity. Well higher interest rates cause problem when the debt has to be rolled over. Spain and Italy will face troubles as hundreds of billions of euros will be rolled with interest rates substantially higher. It’s like an adjustable rate mortgage on their home. That will cause an outflow of their national wealth, which perhaps is bullish for stocks, or perhaps the migration into the dollar will be too strong at some point and crash stocks and commodities priced in dollars. The primary beneficiary over the long run from the migration of capital out of bonds should be stocks, and with interest rates heading higher, it would not be a surprise to see the rally continue. It is not as if the dollar has crashed hard from the 2009. It has lost about 15% since the dollar’s peak while stocks have more than doubled since their bottom. The stocks have gone up over 30% since October 2011, while the dollar lost only about 2% of it’s value. TLT has lost 12% of it’s value since then. dow/gold is up 33% from it’s august 2011 low. Money is flowing into stocks, but how much longer until we see a pull back, or worse a reversal of trends?

Capital is fleeing government debt and into risk based assets. With that being said, certainly there are major concerns, particularly for stocks right now.

Mutual fund cash level have remained historically low but historically there still is a lot of cash on the sidelines of hedge funds and of course retail investors missed out on the rally. So perhaps this may be a bit misleading. 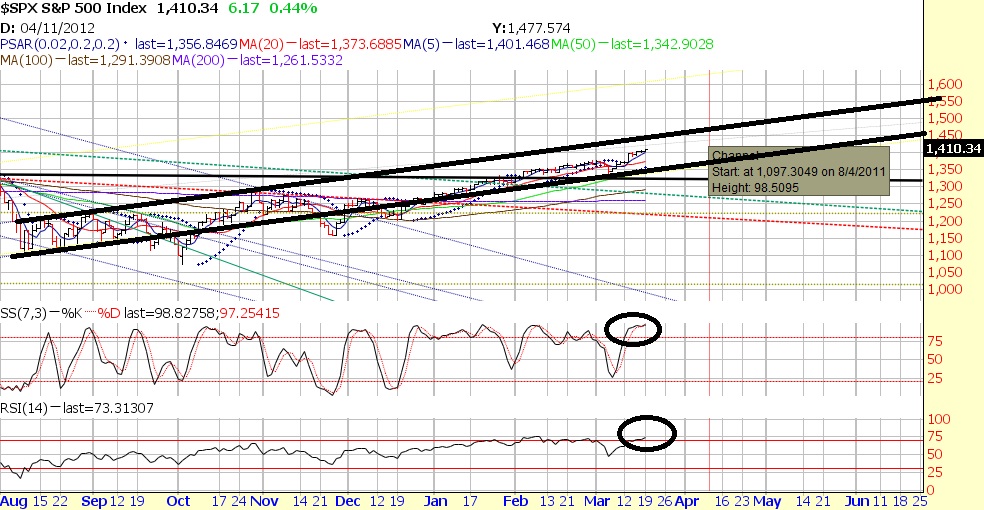 RSI is overbought on a daily and weekly charts

Slow Stoch is heavily overbought on daily, weekly and monthly

We still remain in an upward trend and as I have warned previously, uptrends tend to stay overbought longer than downtrends can stay oversold. This is why the strategy I have mentioned is to allocate “risk on and risk off” accordingly, rather than shifting to negative risk or shorting the market.

The long term look at treasuries appears to remain a good contrarian play, and perhaps it is finally breaking here. The more heavily allocation towards the dollar and currency ETFs and away from US treasuries has paid off. The recognition of FXI being more overvalued than SPY in the Feb trend trader, may have provided some with a short that made money despite the market melting higher as well as provided some value long names, of which many have done well. It also would have provided you with a look at some currency names that may have held up relatively well. I would advise raising a little cash from both trades.

I have a feeling we could stay overbought for a little longer here, but I’m not willing to bet on it heavily either way. I tend to think a top is coming and that the similarities of 2007 are slowly starting to surface with rising gas prices, stocks ignoring overbought signals and an election not far behind.

The relative strength in the dollar (making higher lows since May 2011), even as the stock market makes new highs, and the inflation trade doesn’t seem apparent globally or domestically with gold and silver breaking down as the dollar holds up.

This is telling me that capital is migrating into the US, and globally is still finding it’s way into risk assets.  Perhaps individuals are selling assets (which are priced in dollars, and with global reserve currency in dollars tend to first liquidate to dollars), in commodities and bonds and foreign currency, and raising cash while still entering into stocks. It seems that way.

Some plays for the long term… short treasuries, long dollar, long currency etfs, long natural gas long term, short gld+silver, long dow, short nasdaq (a bit dangerous as it could produce a parabolic blow off top like in 2000.) Otherwise scan through the trend trader for some ideas that are undervalued long term and won’t hurt you to rebalance if we go lower, and perhaps run a screen for upwards earnings revisions. I believe if we don’t roll over relatively soon, JUNE is probably the month to watch for a peak.

Unfortunately sometimes the last part of a move is the strongest. for this reason, I speculate in options every now and then when the VIX is low, rather than expose myself in stocks directly. If it is a big blow off top, then I will gain more with a smaller amount of leverage. If not, I may lose a significant amount, but not significantly more than I would have. if I am less aggressive, my downside will be less and my gains will be nearly the same or about the same or slightly more..