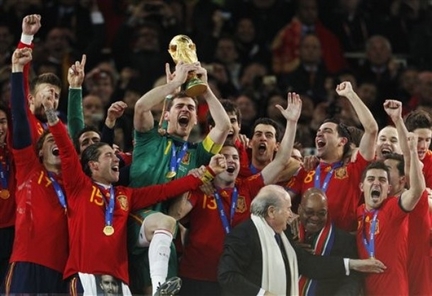 Now it’s your turn to conquer the market!

After having a weekend long fiesta of sangria, paella, and Salma Hayek  I was brought to a drunken reality that in order to make it in this market, you have to have at least one or two longs to keep you sane.    My stand on this market is still bearish.  But that doesn’t mean there won’t be a bullish spot.  Tomorrow I will get long these two stocks.  I am also buying as many Spanish jerseys with their first star (for those of you who don’t know, this was Spain’s first World Cup win, which means they finally get a star on their national jersey.  Time to represent!  Brazil has 5 of those stars).   Can you imagine if Torres actually played some soccer?  At least Villa, Puyol, Casillas, Xavi, an Iniesta came to play. 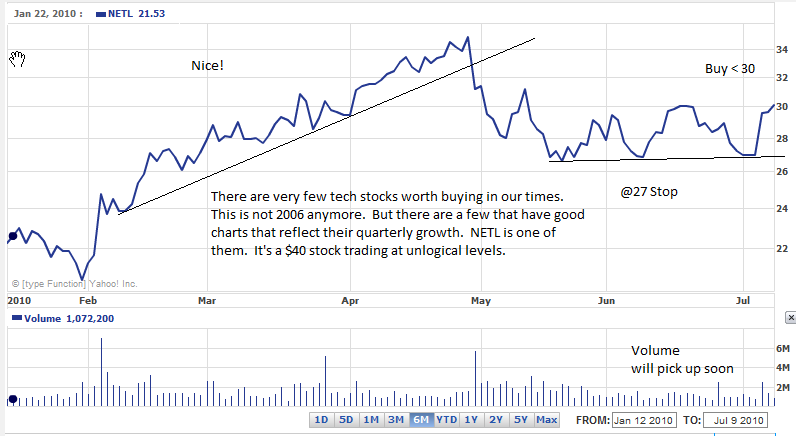 END_OF_DOCUMENT_TOKEN_TO_BE_REPLACED

Lebron Is a Diva

Sorry for the non-investment title and post, but can you believe this guy?  Who goes out and tells ESPN that they want a 1-hour special called “The Decision” to announce to the world what team they will sign with?  Who grabs a nickname from the Bible, and pronounces or accepts the title as “The King”?

I’ll tell you… someone who thinks too highly of himself and yet is ringless.

Give me a break.  I’m going to tune in on his announcement today just so I can see how dumb it is.  Yeah, I’m just as sheepish and dumb.  How long does it take for someone to announce their new team?  Hmmm, Michael Jordan said it in two words, “I’m Back.”  Who needs ONE HOUR?!!  This is presumptuous, and ESPN needs to take off their skirt after the show.  If Lebron doesn’t stay with the Cavs, then he just made his exit a glorious “see yah, kiss my butt, I’m going somwhere else.”  If he does stay with the Cavs, then he’ll have this reputation of creating a crusade, or like he’s trying to prophecy his heroism.

And I don’t buy that, “I will use the proceeds from this 1-hour show of my announcement to help the Boys and Girls club.”  What a publicity front!  Why stop there?  Let’s put Lebron’s used toilet paper on eBay and use those proceeds to fight cancer.

Anyway, I guess there’s nothing else to talk about in the NBA.  I think it’s absurd that Lebron gets his own webpage on ESPN and his own Twitter account having to deal with his signing.  All hail the King!  We are zombies.

Okay, back to real trading.  It looks like the market is serving up some beat down to the bears.  I’m still not flinching on my shorts because as I stated earlier, it’s not a good time to go 100% short in your portfolio, but you should be building towards a bigger short position (or smaller long position + neutral position).   Today was actually a good day to short.  I think tomorrow we will have a good down day at least to wipe out today’s gains.  Either tomorrow or early next week.  It’s not that promising to see trash stocks leading the market up.  For today, you may have noticed China stocks were making a run like JASO.  But when you look at the leadership in that sector, it was quite flat… BIDU closed almost neutral.  More importantly the leaders are flat today.  Carefully monitor them!  I’m waching NFLX, PCLN, AAPL, NETL, VMW, ROST, and LULU.  Only PCLN and LULU did well in that powerhouse group.  For now, just remember, do not overtrade this tape!  It’s a day-trader/short-term-swing trader’s market.  If you don’t fit those categories then lighten positions, especially if you’re uncertain on a 2-month timetable.

Okay, time to watch the Lebron show.  So, where does he go?  If he joins the Heat, do they win it all?  Does Jay-Z offer him the future of Brooklyn?  Will he ever win a championship ring, and if so, does it hurt his legacy that he needed the help of two superstars?  I hope he stays with the Cavs, but if he does go to the Bulls or Heat….

END_OF_DOCUMENT_TOKEN_TO_BE_REPLACED

Well right now I have one eye on the market, one on the Spain versus Germany game, and one eye on my iPad.  Wait, that’s too many eyes.  Anyway this is the World Cup Semis, so even if you don’t care about European Football (which I know you don’t), for the love of sports, you got to watch this!

Meanwhile, we finally got that big market rally I was talking about.  This tape went from totally confusing to reasonably predictable.  Remember, big one-day rallies follow a long multi-day market decline.  So you had 7 days of decline, one day of rest, and one day of spike (today).  But that’s all you’re going to get.  I am not buying this rally.

–  One thing I find interesting though, is that latin related stocks seem to pick up during the World Cup.  Lol.  Just look at MELI @ 55.  It’s a rare stock with strong technicals.  I was wondering why it kept coming up on many bullish screens.  Maybe it’s because everyone is bidding on soccer jerseys?

–  Tech is doing great today, but stubbornly I won’t buy.  Maybe you can?  If so, check out NETL, VMW, WBSN, and RVBD.  Riverbed is up about 7%… that’s a stock we like here on iBC.  NETL and WBSN up 7% too.  If you’re going to trade tech, please please please trade these four or the like.  Stay away from the old boring ones like YHOO, EBAY, MSFT, INTC etc.  I probably will get long WBSN and RVBD again when the market declines.

Ok, back to the game.  Impress me Villa.

END_OF_DOCUMENT_TOKEN_TO_BE_REPLACED

ERII Jumps 17%, But Back To Square One

Well, we had our fun on ERII as it blasted off almost 20% in a few weeks despite a crumbling market.  This is a good lesson on how to spot an oversold stock that picks us momentum near the bottom, then gets dumped at a key resistance point.  Study it for more great oversold plays.  ERII hit my 10% target and therefore was triggered to sell just above 4.  I’m thinking a re-entry here is a nice speculative play if you’re banking on the market giving us a big relief rally.  Usually after a chain of down days the market responds with a big bear market rally that usually lifts all stocks by a magnitude of 2x. 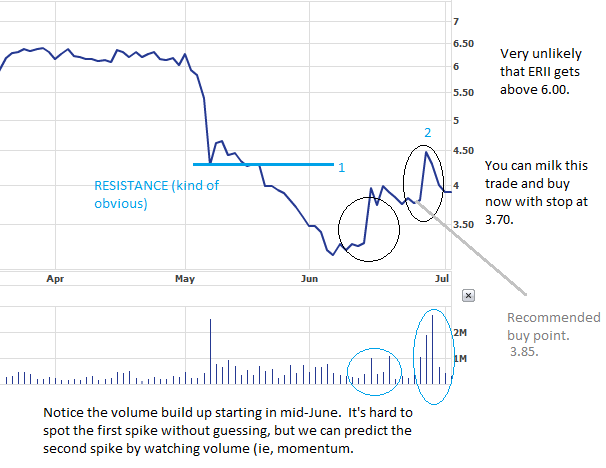 As another tip, keep an eye on Chinese stocks.  It’s odd that some countries don’t have jobs want to work, but the countries that do have jobs want to go on strike.  There’s probaby more to it, but China is not getting friendly with their job industry like before.  This will probably have deeper effects on the American market and other overseas markets.  I’ll keep yall posted!

END_OF_DOCUMENT_TOKEN_TO_BE_REPLACED

Next Week We Rally, BUT…

Let’s see, I opened up an AFAM short which is sure to go against me next week, but I’ll add my real position then.  I added more to my LULU short because it feels good to be anti-yoga (no more parking at the gym thanks to them).  And to get a little nasty, I’m getting LONG APPL at the end of the day.

Right now I’m doing “baseball-trading.”  Not swinging for home runs, just getting doubles and triples.  My long AAPL move is probably a bunt.  Baseball trading is something I developed in college when I was busy taking exams and chasing foreign girls.  Basically, when you’re too busy to track everything in the market, all you have to do is make aboue 3 trades at a time, with the goal of getting two out of three (2 with the trend, 1 against).  That’s a pretty good batting average, no?  Let’s just hope the market doesn’t go Roy Halladay on me.

END_OF_DOCUMENT_TOKEN_TO_BE_REPLACED

The Trend Has Switched… Get Short

So what side are you?  Well, it was getting real frustrating shorting this market last week, but it’s nice to finally see it break down.  This is my game.  Yes, we will get a few rallies here and there as longs try to buy up these dips.  But you have to play it smart.  Please! At least go 50/50 in your portfolio, although it is probably more proper to go 70 short 30 long by the end of July.  I don’t know why, but a lot of my trading buddies here have a hard time going short.  What’s the big deal?  Just flip the chart upside down.  Good becomes bad, bad becomes good.  Get aggressive when you’re feeling evil, get conservative when you’re feeling happy.  Everything just flips.  The only real difference is that stocks move faster in downtrends.  You will see big moves, like +/-10% moves in a single day.  Can you stomach that?  Learn to average in and you will, that’s how you can beat the market on the downside.

ALL my shorts that I recommended over the past month are on fire.  Either that, or I am getting much more confident that they will break down.  My trading analogy for the day is this:  Dark Ages.  The bulls are holding fort behind large walls.  The bears are coming in with their battering rams.  Every now and then they will get pushed back, but every bang on the door means the wall is getting weaker.  We will get a huge drop in this market, it’s just a matter of when… the hand writing is on the wall (unemployment, countries are broke, China’s market at year lows, Europe broke, banks in debt).   Do something.