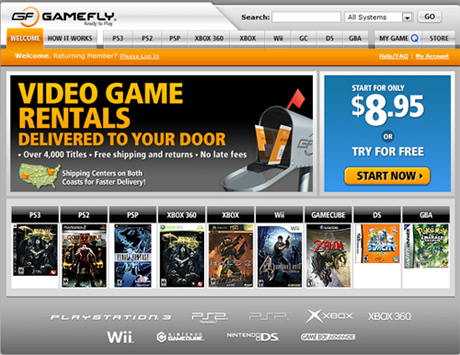 Waiting for a stock that will fly?  Well I’ve been waiting much longer than you.  In February 2010, GameFly.com filed for an IPO, and all year long I’ve heard nothing over the wires on when this stock will go public.  Well, now that almost a year has past, I’m expecting GFLY to finally spread its wings and fly…

What is GameFly.com?  Well, best way to describe it, they are the NetFlix of video games.  And you know how much we here at iBC love NetFlix as a company!  Again, I like to invest in companies that have unique and game-changing concepts.  NFLX pioneered the idea of mailbox dvd rentals, and with that came the end of BlockBuster video.  Will mailbox videogame rentals do the same?

Probably not as epic, but still stellar… I can see GameFly becoming a household name if they continue to prove to consumers the cost benefit of renting video games.  I’m not saying that GameFly will make companies like GameStop irrelevant, but they are the first to this hot market, and they will be the strongest.  So, watch how this one develops, and see if GameStop tries to copy GameFly, then you’ll know that GameFly is indeed a company that is scaring the industry.

Gamefly is relatively a new company, founded in 2002, with heavy investment by Sequioa Capital.  According to the February announcement, Lynch and Pipar are to handle the $50 million offering.  I think the offering will be increased however because looking at the year over year revenues up until March 2010, GameFly was growing at least 20%, $50 mil is not really going to give them enough capital for a 10 year window.  Maybe an amendment to the S-1 or a secondary offering?  Or maybe they keep the $50 mil.  It’s just odd that it’s taking GFLY so long to go public, especially since they are burning cash on advertising (see their commercials on TV?  Fun stuff.)   Anyway, I’m still waiting for their financial statements to be released for 2010 so I can get a better idea.

Meanwhile, we don’t have to know too much about the accounting side to speculate that GFLY will be a hot stock.  Investors will be thinking, “hey, it’s the next NFLX.”  And even though it will not be close to what NFLX is doing, people will still buy the stock on opening day.  So I want you to play this one as a trader for the first month (think of it as “renting the stock,” lol), then transist into an investor after all the nonsense bidding goes on after the IPO.  It’s really hard to predict price action if there’s no history, so only aggressive traders here.  But if you believe that GFLY is indeed the video game version of NFLX, then investing in it for a few years is definitely a viable approach to diversifying your portfolio.

And it the concept makes sense… it’s cheaper to rent a game, pay about $10 a month, play it, beat it then return it.  How many games does your kid have just laying around the living room because they already got tired of it.  The monthly subscription that GameFly charges is far far far cheaper than the depcreciation cost of games.  I’ve read a few forums on people who use GFLY, and right now it seems like most of the products rented are the “lower end” games.  I’m not sure what that means, but I think what GFLY cannot replace, is the blockbuster titles, the ones that people prefer to buy and keep for the entire year.  I really hope management at GameFly can figure a way around this.  Maybe offer a more creative way to renting games?  Nevertheless, their revenues are growing so they are doing something right.  Oh and don’t forget, there’s always the possibility that a giant like Amazon, Best Buy, or NetFlix might buy them out.  GameFly is already partnered with Best Buy (not really a fan of that), so at the least, they are gaining product awareness.  Remember too, Electronic Arts (ERTS) bought social networking game company PlayFish Inc for $1 billion, so you know that this industry is hot.  I still look at PlayFish’s website and shake my head, wondering who in the world plays these games.  Can’t argue with the industry, people are just weird.

So, I’ll keep yall posted when I start hearing more about their offering.  Just make sure you keep them in your radar.  In the meantime, don’t forget that CoinStar (CSTR) is going to be a fun stock to trade during 2011.   It’s the closest thing to GameFly right now.  It’s so much cheaper to rent than to buy.  Only now our dumb population is starting to figure that out. 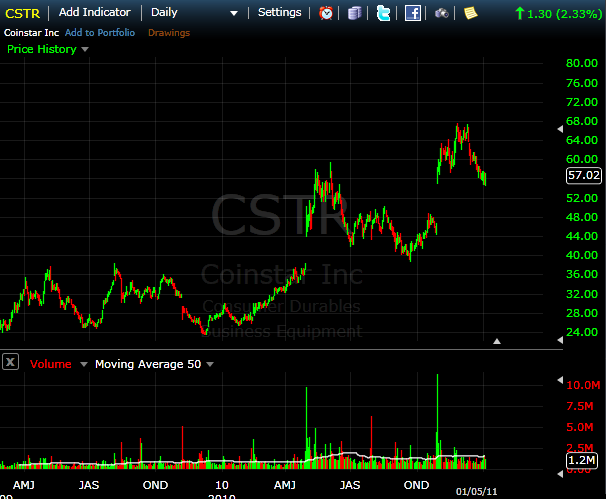