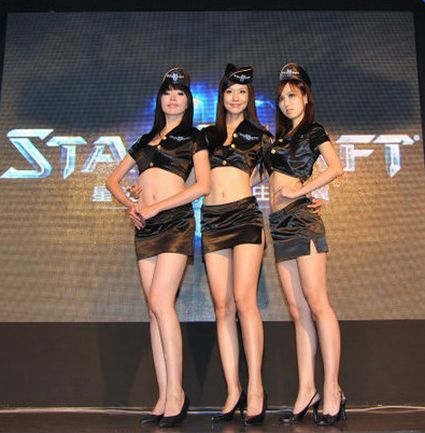 ATVI is one heck of a company.  They are the definition of greatness in the world of video gaming, in fact, they are the definition of greatness for any company.  They have everything that every company strives to achieve:  massive revenue, global presence, large cash position, acquisitions of talented companies, talented staff, great products.  The only thing they lack, is a stock price history that doesn’t reflect their industry performance. For me, buying ATVI under $15 is a great deal.  Here’s why…

ATVI is like the Apple of the gaming industry, they make a few products, but make sure it’s the best.   Meanwhile, if ATVI is like AAPL, Electronic Arts, ERTS, would naturally be the Microsoft of the gaming industry.  What makes ATVI like Apple is that they invest heavily on a few products.  They pour millions into one game, make it a “best seller”, and hope to bank on it.  ATVI, or more commonly known in the gaming industry as Blizzard, is probably the most hated software company there is.  And that’s a big reason why I like them.  It’s the whole, the better you are the more haters you have concept.  There are a few ongoing projects that ATVI is in that makes it look good going into the next few years.

1)       Global market influence, strong presence in Asian market.  Probably one of the best I’ve seen for a U.S. company

2)      Acquisitions to make company stronger; Halo maker, Bungie ditched Microsoft three years ago and partnered with ATVI in April 2010.  Do you know how big Halo is? (http://www.shacknews.com/onearticle.x/63547)

Many investors of ATVI have been eagerly waiting for the release of StarCraft 2.  And investors have been waiting a long time… It took about 10 years to develop and cost $10 million to make.  Ten mil?!  That’s crazy.  It seemed like the wait was worth it:  SC2 came out in the Spring of 2010, and sold over 1 million copies in its opening day.  That’s insane stuff too.  But the market didn’t seem to care.  The stock has been capped.  Sheesh.  This can get real frustrating for an ATVI investor.  Just why isn’t ATVI doing well?  It’s mostly due to a slump in the overall gaming industry, and stingy forecasting by analyst.  The gaming industry was a firecracker two years ago, and has cooled off significantly.  Just look at ERTS yearly. 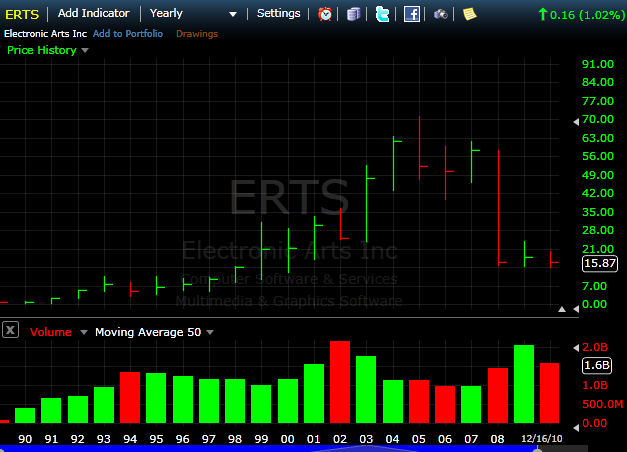 That’s why, for now, I think ATVI’s stock price is cheap… analyst are capping it, but really, they have the best selling game, StarCraft 2, and will release more top selling games in the near future (they are very careful in timing their releases.  For example, they did not want to release other real-time-strategy games and first-person shooter games this year since SC2 was their trump card).   If you’re not a gamer, just look at how impressive this one game is from a marketer’s perspective… SC2 was released in North America, Europe, South Korea, Australia, New Zealand, Russia, Brazil, Chile, Argentina, Singapore, Indonesia, Malaysia, Thailand, the Philippines, and Taiwan, as well as the regions of Hong Kong and Macau. In total, the game was launched in 11 different languages across five different continents. It took 24 hours to become one of the best-selling PC game ever.   Another reason investors are nervous about investing in a software company is the scare of piracy, especially since Blizzard’s biggest customer base is in Asia, the Mecca of software piracy.  However, Blizzard addressed this quite nicely, by requiring an account setup.  It’s hard to explain, but basically, anyone can download their gaming software from their website, however, you have to pay for a unique account key.  So, if you’re familiar with the game, in order for you to play, you have to log on using a unique username and password.   This eliminates the use of simultaneous account usage.  And like Apple, Blizzard has constant patch updates making it harder for hackers, and thus making it less cost effective to hack an account than just buying a user key.  Anyway, I’m just impressed in how they handle the piracy issue, since there are millions of people playing on their servers, I’m sure as an investor, you would want each of those users paying you.

The more and more the world becomes connected by the internet, the more ATVI will profit.  Really, when you think of it, with the millions of other people out there OUTSIDE of the U.S., ATVI’s potential is unlimited, and that’s what makes them a far superior company than ERTS and other gaming companies. 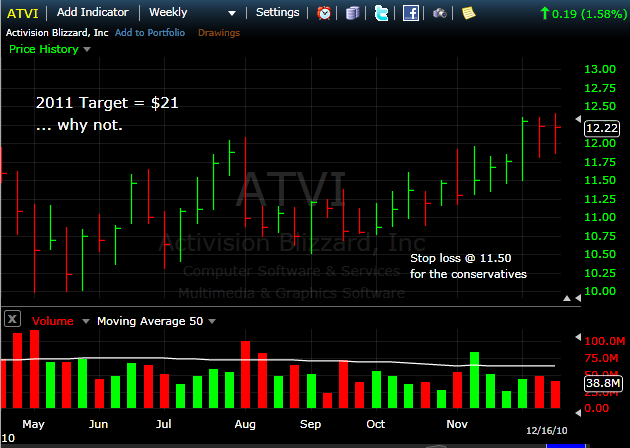 Okay, so the case for ATVI being an awesome company for the future is made on its penetration of Asian markets (lol).  But let’s get to the one-trick pony play:  StarCraft 2010 total sales.  If you made it this far down my post, then you’re cool.  Anyway, here’s the real play I’m considering on ATVI.  Analyst pretty much screwed ATVI by lowering their 4th quarter numbers, probably because the StarCraft 2 initial sales were already so huge.  But I strongly disagree with analyst.  I think SC2 sales will top 14 million by 2010, making ATVI Q4 a record breaking quarter for ATVI in sales, profit, and revenues, and making SC2 the best selling PC game ever.  It’s a risk here, but I like my cards.  SC2 presence in Asia is so strong, and I think investors are really missing out in just how much this is going to affect ATVI’s bottom lines.  So I’m kind of liking this lowered guidance; it gives me a chance to get ATVI cheap.  I know it’s been frustrating for ATVI investors, but I think their patience will pay off.  Get in ATVI soon if you think they will beat estimates on their next report.  You have about 2 months to create your position, so don’t be dumb and buy everything in one day.  Buy it in blocks.  Right now, the gaming industry is in a slump, and the overall market is trading too high for me to get aggressive long anything.  Nevertheless, I think ATVI is a great play for 2011.

ATVI sells to the post populated countries in the galaxy:

… huge revenue potential.  Oh yeah, and I forgot to mention about the expansion packs which release in 2011.  More sales  🙂

Anyway, be smart, and continue to watch the price-to-volume performance of ATVI.  And as always, make sure you keep an eye on their revenues since that’s all analyst care about in this company.  It’s a very sales-sensitive type of stock.  Invest a few minerals in it, kick back and let the masses play and pay.