Obama has kept to his 1st term campaign promise with respect to coal, that is for certain. Coal has had a tough run since 2008. Twenty-seven coal companies have filed for bankruptcy since 2012. The Clean Power Plan has since assisted in kicking  up the pace of the coal steamroller.

$KOL, the ETF for the coal sector (tracks the Stowe Coal Index of global listed names with revenues from coal >50%) hit an all time low last Friday, December 4, 2015. The index is down 54% in the last year and a full 87% from the 2008 peak. The 2nd largest constituent in KOL is China’s Shenhua with a 9% weighting. Shenhua, China’s largest coal player is expected to produce and sell in excess of 500 million tonnes of coal in 2015 (215,000 employees versus 80,000 for the entire coal mining industry in the US). In total, China produces almost 4bln tonnes (3.87 rounded up).

There is no value or “mean reversion” strategy that will save the day for the macro coal outlook at this juncture, in my view. Clever exit strategies are likely more appropriate. Those with equity exposure might want to vet the 1st lien bond portion of the capital structure and flip their long equity position to a short (to estimated recovery rate) as a hedge. Senior unsecured recovery rates in some of the recent coal cadavers, such as Walter Energy (r.i.p. 07/15/2015) has been <5%, a feat hard to match in non-technology names.

China both produces and consumes more than 50% of global coal production. Coal demand is set to plateau with China’s coal-fired power plant moderization plans, but from a standing start 40% of China’s overall energy draw and 66% of their power is coal derived. US electricity is 39% coal generated at present (alas the Tesla Model S is not powered by dried Unicorn dung, its’ power is more coal derived, upon further investigation, than a Denali Hybrid). 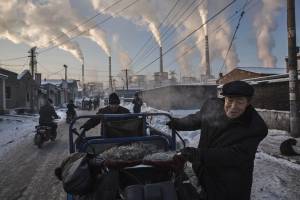 Looking to fossil fuel c02 emissions from power production globally, currently 73% are from Thermal Coal, 20% from Nat Gas and 7% from Oil. At current coal prices 1/2 of known coal reserves should stay in the ground. To meet global climate change goals 80% should. Nat gas produces 50% of the co2 of coal per BTU.  It may not seem so right now, but Nat Gas appears to be the prettiest girl at the dance. JCG