I am going to use Wellpoint as a current, real-time example of a shooting star bearish reversal candle which appeared to confirm lower on Thursday. The purpose of this post is more for educational purposes, though, for those of you who would like to learn more about candlestick theory.

In Japanese candlestick terminology, a shooting star looks exactly the same as an “inverted hammer,” (literally a hammer flipped upside down) in terms of outward appearance. However, a key difference is their respective placement on the chart. After a prior steep downtrend, the inverted hammer can actually signal a potential bullish reversal coming, whereas the shooting star is the term given to the same candle after a prior uptrend, and signals a potential bearish reversal.

A few elements of the shooting star (and inverted hammer):

Beyond the basics, the most important element is that there must be confirmation of the shooting star, since a mere one candle is insufficient to base high probability trades off of in any type of aggressive manner. Applied to our current market example of Wellpoint, you can see the clear, steep uptrend for months on end, followed by Wednesday’s textbook shooting star daily candlestick, then Thursday’s downside follow-through. The presumption now is that Wellpoint is in the process of putting in an intermediate-term top, with a close above $90 likely negating that analysis. 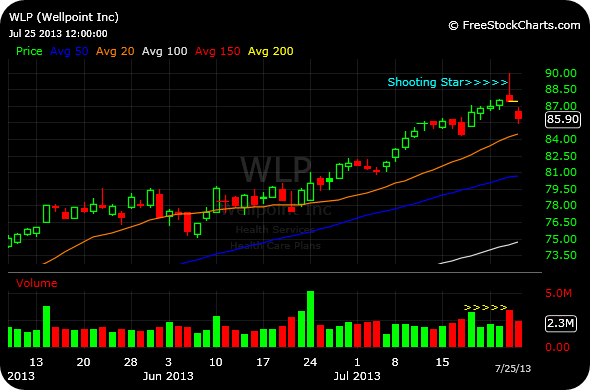