Giving the Secularists Some Religion

A recent debate has emerged as to whether the market has entered a new secular bull move. We tend to look at the market in long-term structures for the biggest picture of the overall investing climate. From there, zooming in on the various bull and bear cycles helps to better frame the market action. As an example, one reason I have noted why the major indices have been able to move higher since March 2009 on fairly tepid buy volume at various junctures is because the Nasdaq Composite Index indicates we have been working through a secular bear market since 2000. In a secular, or long-term structural, bear there are serious problems in the economy and thus usually the market as well.

As a result, you can expect participation to be low amongst buyers, even during the inevitable bull cycles within a secular bear. Thus, the low buy volume argument with respect to the major indices was, and continues to be, a weak one until this cyclical bull actually tops for more than a buyable correction.

The reason why I point to the Nasdaq as indicative of an ongoing secular bear market, even as the Russell 2000 small cap Index makes new highs, is because the Nasdaq led the market higher during the 1982-2000 secular bull market. Plenty of large cap, marquee high growth firms are housed in the Nasdaq as well, magnifying its significance to equities as an asset class. As you can see on the Nasdaq’s monthly chart, the first one below, all-time highs are still well above. Also note that we could easily push higher yet to 3,400 or 3,500 from current levels and still be a significant distance below all-time highs.

With this notion of a secular bear quite obvious from the Nasdaq, how can anyone declare a new secular bull has arrived? The answer amounts to an argument over semantics, in many respects. On the second chart below, I will refer you to the 1966-1982 secular bear market experienced by the Dow Jones Industrial Average. The absolute bottom of that secular bear came in late-1974. However, as you can see, the sideways, volatile, trendless price action carried on several more years before the great August 1982 high buy volume surge kicked off the new secular bull.

So, after late-1974, you would have been correct in declaring a new secular bull is upon us. But that would not have been much consolation if your portfolio got chopped to pieces in the remaining sideways years of the 1970’s and early-1980’s. In this regard, the essence of the secular bear carried on several more years even after the lows were in. The same holds true for the 1929-1942 secular bear, where even though the 1932 Great Depression lows were good lows and held true without being challenged from there on in, the late-1930’s-early-1940’s period was far from bullish action.

In a similar vein, I would submit to you the October 2008 panic crash and the March 2009 apathy we saw towards stocks down at 666 on the S&P 500 were the seminal moments of the current secular bear. Retesting the 666 lows is not likely. However, that does not necessarily mean the secular bear has concluded. Instead, the hallmarks of a secular bear market (extended rallies on low buy volume, sudden surges in volatility when the bear claws come out, i.e. the Flash Crash, summer 2011 swoon, etc.) linger on for several more years before we see the high buy volume surge to commence the new secular bull. In other words, a series of lows (compared to March 2009) are made before a true secular bull begins, probably via at least one more cyclical bear within a secular bear.

The alternative scenario is that the current secular bear breaks tradition with the prior secular bears from last century. Keep in mind, in the history of U.S. markets we do not have many secular bears to analyze. Perhaps with many eyes on historical analogs these days the market will break tradition this time.

But the likely scenario is that the S&P 500 and Dow rise to create the type of optimism or outright greed we have seen at prior market tops, even as the Nasdaq continues to point to a long, slog sideways for several more years before all-time highs are seriously challenged, and the hallmarks of a secular bear truly abate for at least a decade. 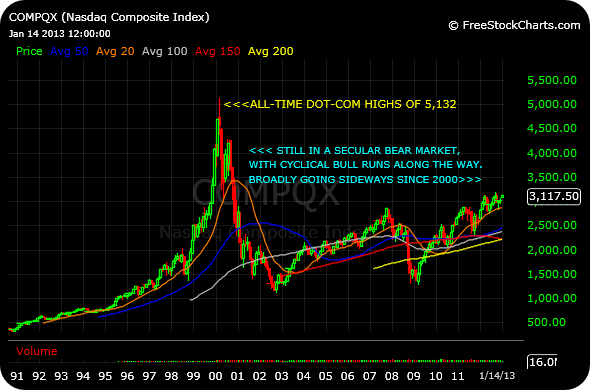 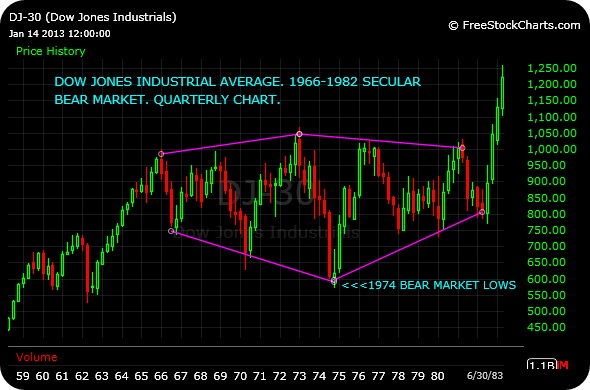