The CAT’s Been Away, But Now Wants to Play

We looked at the monthly chart of industrial giant Caterpillar earlier this year and surmised that a pause was highly likely after marginally exceeding the 2011 highs (making all-time highs in the process), The idea was to gauge the nature of the pullback along the way, looking to see whether the key $85/$86 level held as firm support.

As you can see on the updated monthly chart below, that area was quickly breached in the 2011 summer swoon, only to stop on a dime and recapture it. The logical conclusion is that it was a mere shakeout, albeit a violent one.

Currently, the Caterpillar has has pulled back down to this key area and based out for months on end, denoted by the string of monthly candle dojis. We now have a well-defined range of $85-$116, and the presumption is that it holds. You might call this a clear double-top, but double-tops are far less occurring patterns (valid ones) than you would imagine (see Edwards and Magee for more on this).

Instead, the more likely scenario is that CAT is turning prior major resistance (from 2007 and 2008) into an established level of support perhaps once and for all. 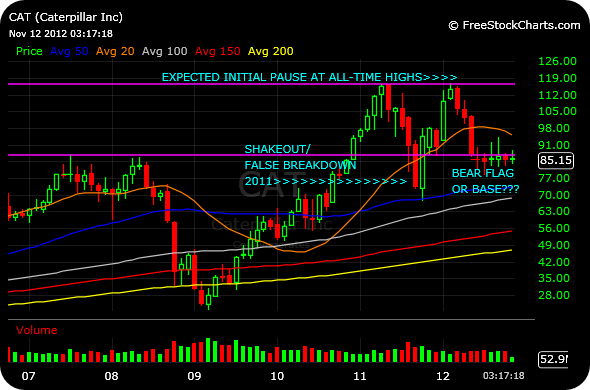 If you enjoy the content at iBankCoin, please follow us on Twitter
2012-11-12
chessNwine
Share
Previous Intraday Look and Analysis: A Big Mountain to Climb
Next HERE IS YOUR CHRISTMAS iPAD GIFT BEING CAREFULLY HANDLED